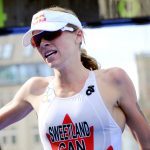 On September 5 through 6, nine Canadian elites will take to the start line at the 2015 ITU World Triathlon Edmonton at Hawrelak Park. As the last stop before the Grand Final, the race is stacked with big talent including Javier Gomez, Mario Mola and Richard Murray on the men’s side and Non Stanford, Emma Moffatt, Emma Jackson and Flora Duffy in the women’s race.