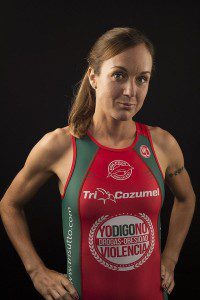 Toronto, Ont., pro Brooke Brown has enjoyed major improvements  under the tutelage of Brett Sutton who she joined at his training base in Cozumel, Mexico in January of 2014. Since then, the spunky pro has travelled with Sutton’s squad to race and train throughout Europe over an extended race season. As a tune up for Ironman Chattanooga in Tennessee on September 28, Brown will toe the line at the Ironman 70.3 Cozumel this weekend.

She’s thrilled to be back in the heat of Mexico. “My morning runs in St. Moritz at 4C were wearing on me. Racing in what’s become my own backyard, I’ll be able to mentally draw upon and visualize some of the tough sessions Brett put the squad through. I am training  through this race without a taper but, I will put forth a solid effort and you never know I may just surprise myself.”

Certainly being able to train with some of the biggest names in the sport makes for a big boost in confidence. “Last month,  I had the opportunity to join teammates and other celebrity triathletes, like Nicola Spirig and Daniela Ryf, in St. Moritz. Despite the cold and occasional snow, it was a definite highlight in my year. I did some of my best swimming there and unforgettable, gruelling rides through the Swiss alpes.”

Earlier this summer Brown won Triathlon Vitoria, (Iron distance) in Vitoria-Gasteiz, Spain in a time of 9:51:01 and IronMedoc, (Iron distance ) Hourtin-Medoc, France in 9:37:49.

“Over the course of the year, Brett and I have seen huge improvements in my swim and more modest betterments in my running,” says Brown. “Biking is the one are where we haven’t seen as much growth, but the workload and effort from the increased swimming leaves less gas in the tank for the other two sports. I am patiently waiting for all three disciplines to come together,” she continued.

From her results this summer, there’s little doubt more wins are to come.