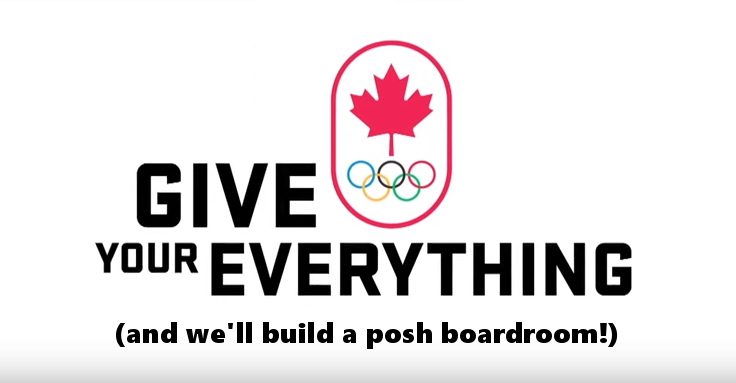 The Canadian Olympic Committee, the non-profit organization that represents Canadian athletes in international sport, dropped $2.9 million on a new boardroom for its Montreal office, reports the Globe and Mail.

An audit by Deloitte revealed that the Canadian Olympic Committee (COC) spent approximately $10 million on a new facility, known as the Olympic House.

The project is the result of former president Marcel Aubut’s vision to consolidate the Ottawa and Montreal offices to one location. Aubut resigned in October after women accused the 68-year-old of sexual harassment.

According to the report, some officials argue that the money would be better spent on athletes ahead of the Summer Olympics in Rio later this year.

The breakdown of funding for the entire Olympic House project is as follows:

The COC added that the “Lausanne Room” is a multi-functional centre that can be used for meetings, news conferences, presentations and multimedia productions.

Deloitte’s audit also found that the project remains behind schedule and over budget as the Olympic House in Montreal still requires finishing touches.

The building in Montreal opened this past summer with the organization spending $1 million on an outdoor celebration, $400,000 of which was spent on catering, to reveal the organization’s new headquarters. The COC also has an office located in downtown Toronto.

The Canadian Olympic Committee is responsible for, among other initiatives, managing “a wide variety of cultural and educational programs promoting Olympic values in Canada,” and supporting “additional grassroots programs where communities develop and promote the Olympic values at all levels.”

Tricia Smith is the current president of the Canadian Olympic Committee.