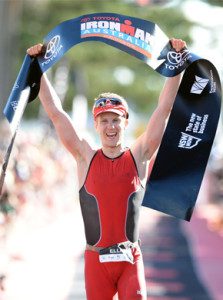 Canadian pro and geophysicist Elliot Holtham from Vancouver, B.C. scored his first Ironman victory at the 29th running of Ironman Australia in Port MacQuarie, New South Wales on Sunday. The race was just his third effort at the distance and he defeated the two race favourites, defending champion Luke Bell and Paul Ambrose. Holtham is only the second Canadian male to win one of the oldest races in the history of the sport – following back-to-back wins by Peter Reid in 1998 and 1999. Bell came out of the water with a slight lead and then began to build on the lead on the 180 km bike course.

In the final stages of the bike Bell’s lead had grown to over 12 minutes over Paul Ambrose who was in second spot. Due to injury Bell fell off the lead on the run and Canadian Elliot Holtham passed both Ambrose and Bell to take over the lead. With just 35 km Holtham increased his lead to almost two minutes over Ambrose who had passed Bell for second place.

“That was a tough day, I cracked my Garmin so had no power, no time, lost my nutrition so wasn’t in a positive place,” says Holtham.

“I had the word patience written on my hand and I knew I had to bring it back.

“I wanted to win an Ironman that’s what we do. It’s really special and I know there’s a lot of people watching back home.”

For the pro women, two-time Ironman 70.3 World Champion Melissa Hauschildt made her successful Ironman debut and claimed a well-fought victory. The main contenders were Lisa Marangon, Hillary Biscay, and Melissa Hauschildt. All three swam well with Biscay out front in 49:22 with a 26 sec advantage, but it was Marangon who was in the lead for most of the bike course.

Marangon took charge on the bike after Biscay lost her chain. On the run, however, Hauschildt pushed past the leader eventually claiming the victory by two minutes.“I decided to do this only three weeks ago and had two weeks off before that,” says Hauschildt.

“It felt amazing crossing that line. That was the toughest thing I’ve ever done. It just goes on and on, it was not fun at all.

“It’s awesome I don’t get to race that much in Australia, so to win an Australian title is awesome. The next time I do one I think a bit more training is in order.

“I was just thinking never again, never again, just cross that finish line. It was so tough, I’ve never run that far before, four laps, after one lap I was buggered, it was really tough.”