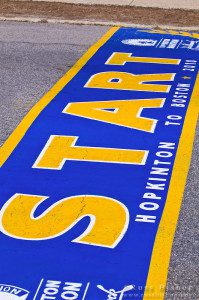 The Boston Marathon is increasing the number of bibs it will be selling for the 2015 race.

“The BAA worked with many partners for more than a year to reclaim the joy and celebration of Patriots’ Day at the 2014 Boston Marathon,” said the organization’s executive director, Tom Grilk. “As we look forward to 2015, our goal is to accommodate as many participants as possible in the Boston Marathon, while maintaining the exceptional race experience and unique characteristics that make this event special. Our field size limit allows us to meet that goal and our registration process recognizes the commitment needed to qualify and gain entry into the Boston Marathon.”

Still, the largest field the Boston Marathon has ever hosted was the 1996 race, where the BAA sold 38,700 bibs for the centennial edition of the run.

Registration for the race will open on Monday, Sept. 8, at 10 a.m. EDT and will be held on a rolling basis with the fastest qualifiers being offered the first chance at registering.

The race will be held on Monday, April 20, which is Patriots’ Day in Massachusetts.