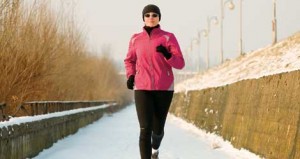 Canadians are well into winter and for triathletes, that means that training in the freezing elements has been going on for weeks. Riding and running outside in the winter takes that extra bit of commitment. Even just getting yourself to the pool while it’s cold out can be a daunting thought. For those who train outside in the evening, temperatures plummeting well below zero aren’t exactly inviting. Have you ever noticed that with winter comes food cravings and the longing to sleep for longer hours? Our systems seem less willing to get out and train. But diligent winter workouts can be done– just avoid killing your own buzz with any of the following:

Settling into a Netflix session early in the evening. If you know you’re planning a workout for 7:30 p.m., don’t. touch. Netflix. Seriously, you know what’s going to happen. Save the episodes of Making a Murderer until after. Then, binge all you want.

Succumbing to mid-afternoon food cravings. Filling the stomach with heavy or greasy foods will come back to haunt you in about three hours when you arrive at the gym or hit the streets ready to tally up the kilometres. Fill yourself enough to fuel whatever activity you have planned for later, just keep it light and healthy. 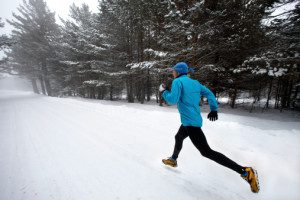 Allowing snow to be a good enough excuse not to train. Once you allow snow to be an excuse not to train, you’re basically doomed until the end of March or even into April. It’s winter. It snows. Don’t let the snow kill your buzz, just get ready to pile on the layers and leave footprint in your favourite winter kicks.

Turning the lights out well past your bed time. Mornings are much darker now. Darkness first thing can suck away the motivation but since you can’t change the time of sunrise, this one is kind of unavoidable. What will make getting up for a dark winter morning workout much more tough though is if you turned then lights out an hour later than intended.

Playing it by ear in regards to settling on a workout time. We all do this at times: you miss the morning workout then you wonder about scheduling something during the lunch hour. When 12:00 p.m. rolls around you decided to just play it by ear after work. This sort of planning often just results in the workout getting pushed back until tomorrow when evening plans take over.

Not getting proper winter apparel. This one is going to kill your buzz before you’ve even gotten out. Hey, in a pinch it’s definitely better to make do with whatever clothing is in the closet but being properly outfitted will ensure comfort during the ride or run. If ever there’s a time to make sure the gear keeps your comfortable it’s when the environment is doing its damnedest to do the opposite.