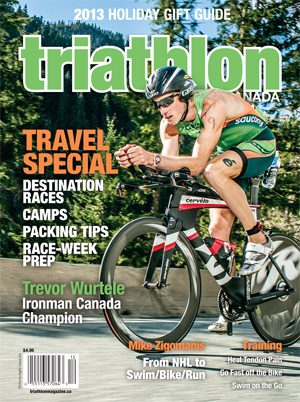 Trevor Wurtele, reigning Ironman Canada champion and subject of the current Triathlon Magazine Canada cover (above), made another one of his classic video race reports.

This one is about his last race, a sixth place finish at Ironman Arizona.

The current issue of Triathlon Magazine Canada features an interview with Trevor here is a small selection from that interview:

TMC: How was your overall experience at this new race location? How does the Ironman Canada course rank in terms of toughness?

Trevor Wurtele: I rode the climb up to Callaghan probably 10 times in training, plus I had ridden the entire course on 3 separate occasions in those final weeks.  I had also ran the run course a couple times. I knew patience was going to make a difference. If I had to compare this course to the old Ironman Canada course in Penticton, I’d say the bike course in Whistler is much harder. Primarily because of where the hills come at you. The run, vertical ascent wise, is probably quite similar to Penticton. But I’d say the Penticton run course is mentally harder.  10km in to that run and you can see all the way down Skaha lake to where you have to run to…and that’s only half way!!  Plus you’re exposed to the sun and wind all afternoon. That run can be brutal. Up in Whistler, though hilly, the run course is shaded most of the way. You get some dirt path to break it up, and you see a lot of spectators given that it’s a two loop course. It’s fun coming back through the village area for the second loop. All of that makes it a bit more enjoyable. Of course, being in the lead may have upped the enjoyment factor just a tad!

Pick up the current issue at to our local newsstand or subscribe.