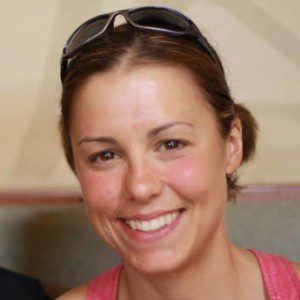 Angela Naeth hammered her way to the front on the bike in the steamy conditions at Ironman Texas today in a time of 8:55:19. The Canadian who lives in Las Vegas has trained long and hard in the heat and her win today secures her spot in Kona where that ability to perform  in sweltering conditions is going to serve her well.

Naeth had about six minutes to make up out of the swim which saw a blistering pack take off including Leanda Cave, Rachel Joyce and relative newcomer, American Katy Blakemore. Once on the bike, however, Naeth put the hammer down with the fastest bike split of 4:41:38, just about six minutes faster than Cave with whom she ran shoulder to shoulder looking calm and steady despite running a 3:09 marathon pace in the heat. Both Cave and Naeth put on incredible performances but Naeth found an extra gear and pulled ahead of Cave to put in three minutes on her for the win. Cave’s second place time was 8:58:12. Rachel Joyce was seven minutes back in 9:05:02.

On the men’s side Lionel Sanders grabbed fourth after an outstanding show on the bike and the start of the run. The heat seemed to have taken its toll on the end of the run for Sanders but he continues to prove what a force he is to reckon with. The first time winner, American Matt Hansen blew apart the field once off the bike with a 2:45 marathon passing all the front runners to a winning time of 8:07:03. In second place was Britain’s Joe Skipper in 8:16:26 who had lead the bike leg with an amazing 4:10 split. Only Sanders came close to Skipper’s time with a split of 4:11. The third fastest ride was almost 10 minutes behind with Ben Hoffman riding 4:20.Ronnie Schildknecht took third in 8:21:03 and Sanders was just three minutes back in 8:24:54.