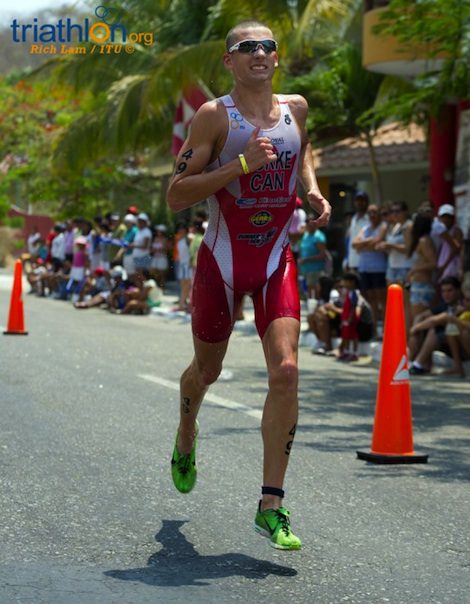 Canadian Andrew Yorke surged ahead of American Ben Kanute in the final few meters to win the PATCO Sprint Triathlon Pan American Championships on Saturday in 50:57 on the 750 m swim, 19.3 km bike and 5 km run course. Canadians were an impressive force in the top five in both the Sprint and Junior North American Championships.

In the women’s race, Amelie Kretz took silver while teammate Joanna Brown took fourth. American Sarah Haskins posted another early-season victory in a time of 57:03. She also won the March 1 Clermont ITU Sprint Triathlon Pan American Cup. Sara McLarty lead out of the water, entering the first transition ahead of Haskins and eventual 3rd place finisher Tamara Gormanz. McLarty and Haskins then teamed up to put distance between themselves and the rest of the field, heading out on to the run with a 50 second advantage. The gap closed slightly over the two-lap run, but Haskins kept her lead to finish  30 seconds ahead of Kretz.

“Right now I think it’s tougher because I’m still getting in a little bit of training between races, because it’s early in the season,” Haskins said of her back-to-back wins. “It’s great to be out here. This was my first time racing here [in Sarasota] and it’s an awesome course.”

The men’s race started similarly to last weekend’s contest in Clermont, with American Hunter Lussi leading the field, including Kanute, out of the water by 13 seconds. The leaders quickly formed a bike pack of 16 on the first of three loops, which turned to a lead group of eight by the end of lap two. At the start of the run, Kanute and Yorke quickly broke away, running most of the 5 km together before Yorke rushed ahead for the win.

“I knew Andrew (Yorke) was a great runner, and my run has gotten so much better this year than it was last year. All I wanted to do was stick with him […] but he just put on such a solid pace, he had a little more to give than I did,” said Kanute, who plans to race over the next two weekends at ITU World Cup events in Australia and New Zealand. “This is a good confidence builder going into those races.”

Before the Elite races, the Junior Elite athletes took to the course for the Junior North American Championships, a race which determines participants for the PATCO Championships in Dallas, Texas, on May 31, as well as the Youth Olympic Games qualifying event in Monterrey, Mexico, for athletes ages 16 to 17.

Three Canadians were in the top five in the junior men’s race. Xavier Grenier-Talavera won in 53:57 after leading the field out of the water early in the race. He was followed by Canadian Jeremy Briand just three seconds behind and compatriot Russell Pennock in fourth place with a time of 54:10.