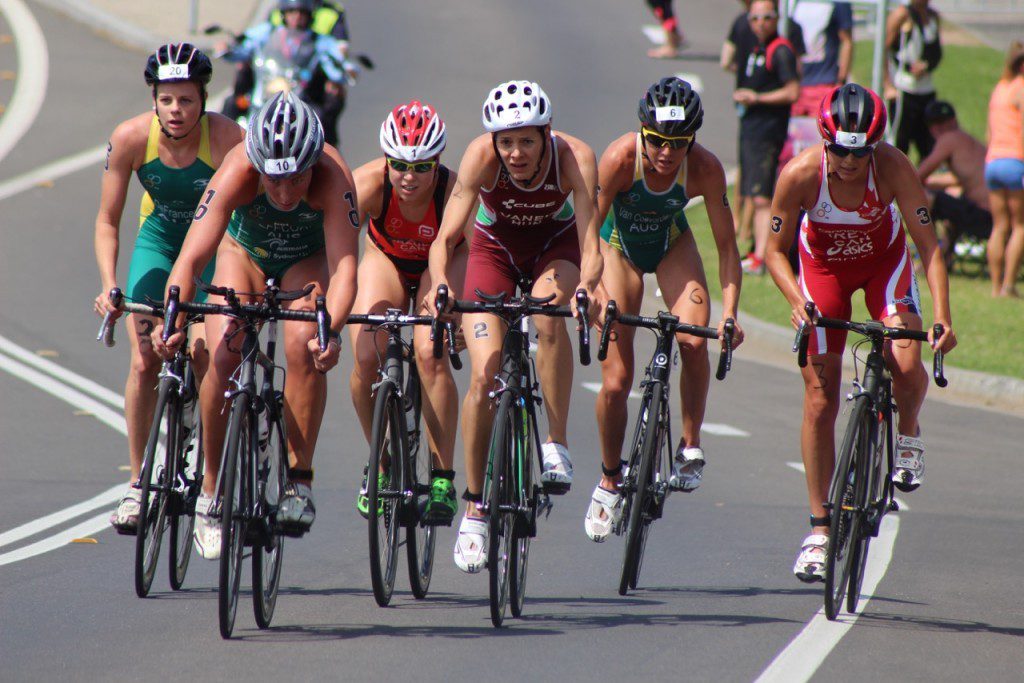 Fresh off her win at the OTU Sprint race, in Belmore Basin, Wollongong, Australia, Quebec’s Amelie Kretz is heading into this weekend’s ITU World Cup in Mooloolaba as one to watch. Like her Canadian teammates she’s been working hard training down under and she weighs in on what that’s been like.

TMC: Congratulations on an excellent race last weekend in Wollongong.  How did the race unfold for you?

Amelie Kretz: The race went well. We used it more as a preparation race for the biggest races coming up. I wasn’t rested going into it but I was really excited to be racing! My swim was average. I got out of the water with the front group, with one girl 20sec ahead. We started chasing her down right away and caught her within the first 4km. Sarah Anne (Brault) and I made sure we kept the pace nice and high during the whole bike and made sure everybody was doing their share of the work. I got off the bike and my legs still felt pretty fresh. I went out on the run hard and had a gap right away on the second place (Sarah Anne). I ran by myself at the front for the rest of the run and felt good. It was great to start the season with a win. A good confidence boost heading into bigger races.

TMC: You’ve been training in Australia for the past few months with a number of Canadian teammates. But you’ve also been joined by Gwen Jorgensen. How has that been? What’s the group dynamic like when  international teams with massive talent train together?

AK: I have been in Australia since Jan 2nd. I spent the first 3 weeks in Falls Creek for an altitude camp. Now I am based out of Wollongong, 65km south of Sydney. I am here with a couple of Canadians also on the national team, Tyler Mislawchuk, Sarah Anne Brault, Alexis Lepage and Ellen Pennock. We are training with the national team coach Jamie Turner who is also the coach of the current World champion Gwen Jorgensen and a couple of other international well accomplished athletes. The group, the Wollongong wizards is awesome. You always have someone to push you in the water, on the bike and on the run. The dynamic is really good and everybody is happy to contribute to the group.

TMC: How do you manage being away  from home for long stints of training and racing abroad?

AK: I am pretty lucky to have really supportive parents that comes visit me wherever I am in the world. They are flying to Mooloolaba to watch the race and then they will visit and come see my race in Auckland. So that always helps to be able to spend time with my family wherever I am. I consider myself lucky to be able to travel around the world to train and race and now with Skype or FaceTime it’s easy to stay connected to the people at home.

TMC: What have you enjoyed most about being in Falls Creek?

AK: Falls creek was great. We were swimming down the mountain 4 times a week in a 33m pool and we would swim open water at the top of the mountain twice a week. The biking was great, my favourite ride was from Mount beauty (village at the based of the mountain) to Falls Creek which was a 35km climb. The running up there was my favorite. As I was still building my running back from my injuries last year, it was good to have access to tones of trails. Up there, I was sharing a house with eight other wizards, so it was good introduction to the group and getting to know everybody.

TMC: What’s the biggest thing you’re doing differently this year in training that you foresee making a big difference this race season?

AK: The biggest thing I am doing differently this year is that I am not training indoors during the winter. Being here allows me to train outside and do more biking then I usually do during the winter. Also, the quality of the group here is an other level. I have great training partners at home but here there’s more athletes and I get push at every sessions and get to learn from the best in the world

TMC: Obviously one of your big goals this year will be to make the Olympic team but what are a few sub-goals you have to get there?