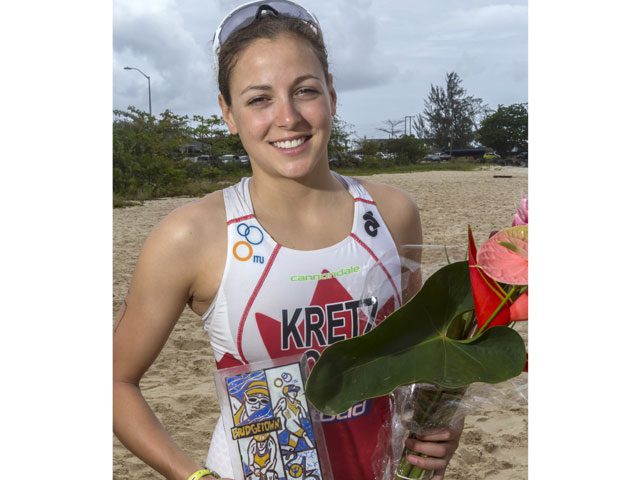 Blainville, Quebec’s Amelie Kretz raced her way to a solid sixth place at the New Plymouth ITU Triathlon World Cup on Sunday. Among some of the fastest women in the sport, she crossed the finish line of the sprint tri in 00:59:42 and earned herself one of her best career finishes.

“The race went pretty well. We used it as a preparation race for WTS Gold Coast next weekend. So the plan was to race tired and use it as a good race-specific workout,” she said.

“I had a good start and was well positioned at the front by the first buoy. I got out of the water near the front and had a good T1. The bike was pretty uneventful. I stayed at the front to cover some attacks and stay clear of the chaos in technical sections. I got off the bike and had the quickest T2 of the day which means I was already in the top three right out of transition.”

Kretz said the race was fast-paced but she hung tight behind the frontrunners, including world champ Gwen Jorgensen and New Zealand’s Andrea Hewitt.
“The pace was quick but despite having heavy legs I was pretty comfortable. Gwen passed us about a kilometre and a half into the run and surged but I couldn’t go with her. That’s also when Andrea made a gap on four of us. With about two to go Kristen Kasper (USA) surged and once again I didn’t have the legs to go. I ended up sixth across the line. I am happy with the race but there’s still lots of room for improvement. I gave everything I had on that day so I can’t be disappointed.”
Jorgensen claimed her 17th consecutive victory, taking the win in 00:58:51. Hewitt finished just 22 seconds back and Kasper seven seconds behind her, rounding out the women’s podium
Sarah-Anne Brault struggled to make up any ground and finished 21st in 01:00:51.

#newplymouthWC. Managed to flip-flop the negatives/positives from last time i raced. Looking to hit all positives next time.. #21st

The four Canadian men on the New Plymouth start line suffered a rough day. Xavier Grenier-Talavera was the first of the bunch to cross the finish line, finishing in 00:54:11 in 22nd place. Michael Lori was 27th in 00:55:44. Tyler Mislawchuk and Alexis Lepage pulled out of the race.

South Africa’s Richard Murray defended his world cup title in an exciting race that came down to the final seconds of the run. Joining him on the podium was Andreas Schilling (DEN) with the silver and Rostylav Pevtsov (AZE) with the bronze.