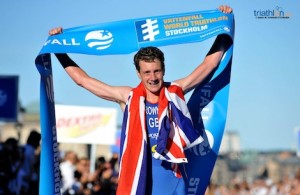 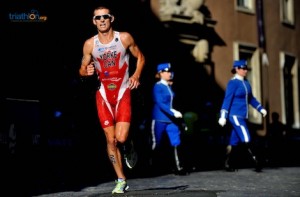 He’s already one of the greatest triathletes in ITU history, but Great Britain’s Alistair Brownlee added yet another notch to his incredible record in Stockholm on Sunday with his 15th career World Triathlon Series win.

In yet another classic display of all-round Brownlee brilliance, he was one of the first out of the water and alongside younger brother Jonathan Brownlee and Javier Gomez, did the bulk of the work on the first seven laps of the bike. But like in Kitzbuehel earlier this year, he wasn’t content to stay with that group and in the eighth lap kicked off a solo break. He edged out a 20-second lead from T2 and held onto that across the 10km run for his third WTS victory this year, ahead of Spain’s Gomez and younger brother Jonathan, in a time of 1 hour 43 minutes and 13 seconds.

“I just did all I could to win really, I knew my running wasn’t quite where I wanted it to be so I had to do a bit of something on the bike, but I got off the bike and thought ,’oh no, I’ve had it here’,” Brownlee said after the race.

“I just kept going and I actually felt quite good on the second and third laps but the last lap of the run I was just a man dead on legs.”

The result also set up an all-out battle for the 2013 World Triathlon Series title at next month’s London Grand Final. Alistair Brownlee’s win put him at the top of the WTS rankings for the first time in 2013. Jonathan Brownlee is now in second and Javier Gomez in third, but they are so close that it means that the 2013 ITU World Championship title will be decided in the Grand Final race.

“To be honest this year I never really thought I would be in a position to win a world title, it’s been a year of absolute disasters and a bit of a slow one after last year so I couldn’t be happier,” Alistair Brownlee said.

Earlier in the day in Stockholm, the chilly Baltic Sea seemed to only spur on Richard Varga as he set a speedy pace early in the first of two swim laps. He pulled the field of almost 60 men behind him, with both the Brownlees and Gomez sitting on his hip. The second lap only served to confirm they would be the leaders into the hilly transition, with Henri Schoeman and Alessandro Fabian also positioning themselves well to make the top pack.

A crew of 15 quickly ditched their wetsuits and blasted onto the 10-lap bike course together but with the Brownlees and Gomez going straight to the front and setting a hard act to follow across the Stockholm cobblestones, that fell to just 10 within the first lap.

But it was a powerful group of 10, including the Brownlee brothers, Gomez, Aurelien Raphael, Henri Schoeman, Vincent Luis, Joao Pereira, Alessandro Fabian, Alois Knabl and Varga, and they pulled out a 23-second lead on the first chase after just the first lap. In a scintillating second lap they managed to put on another 20 seconds. And after Pereira and Knabl dropped, the eight stayed focused and kept increasing that lead and after three laps, it had stretched to a minute.

Largely thanks to herculean efforts from Richard Murray on the front of the chase pack, that gap didn’t increase until after the sixth lap. But while that group was striving to keep the margin manageable, Alistair Brownlee had decided to go it alone at the front and on the eighth of 10 laps made a decisive break. In a thrilling last bike lap Brownlee didn’t let up and left T2 with a 20 second gap on the rest of the lead group.

From there Brownlee was unstoppable. Behind him, it was a thrilling battle between Jonathan Brownlee and Gomez as they played cat and mouse for the first half of the 10km run, but at the 6km mark Gomez made his move and pulled clear into second place. Behind them Raphael launched his best ever WTS performance with a solid run to finish in fourth, just ahead of fellow Frenchman Vincent Luis. South Africa’s Murray pulled out yet another impressive run leg to run through the field and finish sixth.