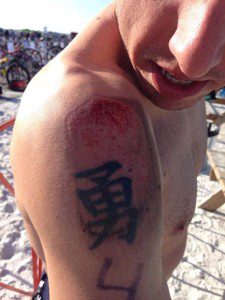 Alan Webb crashed in his triathlon debut at the Pan American Championships in Sarasota, Florida last weekend. The mile recorder ended with a fifth-placed finish (and well behind Canada’s Andrew Yorke) in the mixed relay. Webb, 31, retired from the track running last month and is now making a bid for US Olympic team in Rio in 2016.