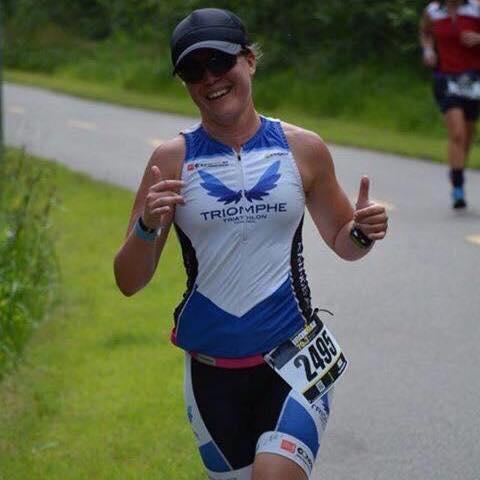 When Josie Pilon, a 32-year old physiotherapist from St Justine, QC first found triathlon, she never expected she would cross the finish line of an Ironman just two short years later. It hasn’t been an easy road for her. For 28 years, she has struggled with Type 1 Diabetes which affects her day-to-day life because of the constant attention it requires. Those with Type 1 Diabetes must closely monitor their insulin levels everyday. If not treated carefully, the disease can cause serious, life-threatening complications.

Before triathlon, Josie was mostly sedentary and uninterested in cardiovascular activity. In 2012, she discovered the sport after meeting remarkable diabetics who had accomplished feats like multiple Ironman finishes and climbing Mount Everest. She was in awe of their perseverance and inspired to train for her first triathlon.

Pilon joined her local tri club and recalls her very first workout. “It was a run workout and I struggled through the whole thing. I wondered if I had made a mistake by joining the club, but the coach and team members encouraged me to stay,” she says. Those people would later become some of her closest friends.

The feeling she got when she crossed the finish of her first triathlon, the 2013 Ironman 70.3 Mont-Tremblant, with friends and family cheering her on, was one she knows she’ll never forget. Since that first race, she hasn’t looked back. She says, “It gave me a sense of control in my life that living with diabetes had taken away.”

Pilon began to use her racing to raise money for Diabetes Quebec. After completing her second 70.3 race, she was 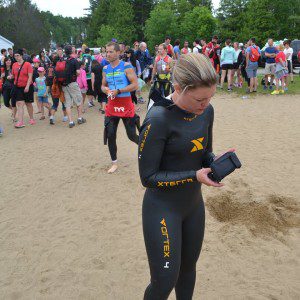 invited to join a newly-formed team made up of people with Type 1 Diabetes who aimed to train for and race an Ironman together in 2015. A team of 36 diabetics, “Riding on Insulin” chose Ironman Wisconsin as their target race. Pilon recalls wondering how she would double the distance she was currently capable of in just one year. An Ironman had always been her dream as a triathlete, but it seemed impossible at the time. With encouragement from the triathlon community around her, she agreed to the challenge and committed herself to getting ready for that goal all year. “I told myself, ‘impossible does not exist.'”

The day of Ironman Wisconsin is one of her fondest memories. Friends and family traveled from far away to come support her. Though nervous and anxious at the swim start (Pilon was fairly new to swimming), she was confident the day would be perfect. “After years of dreaming about it, I finally got to hear those words, ‘Josie Pilon, you are an Ironman’. I raised my insulin pump and felt an incredible sense of accomplishment like nothing before.”

“Even though Diabetes has been a challenge in my life, it hasn’t stopped me from achieving my dreams. It has required that I plan carefully, tackle one goal at a time, be willing to adapt to changing circumstances and most importantly, surround myself with support,” she says. That support comes from her family and particularly the incredible community she has found in triathlon. The friends she has met through the sport will join her on her next journey, Ironman Mont Tremblant later this summer. For Pilon, what once seemed impossible has now become a way of life.