As he took the lead at Ironman Muskoka around the 12 km point of the marathon, Jonathan McMillan was so excited both for himself and his friends and family who were watching that he ran his fastest kilometer of the day.

“I knew it was going to be so wicked for the people watching it took all the pain away,” he said in an interview earlier this week from his home in Orillia, Ont. Competing in his first Ironman, McMillan soon learned how fleeting that feeling can be in a full-distance event.

“The last seven kilometres just sucked,” he recalled with a laugh. “My body was just screaming ‘what are you doing to me.’”

What McMillan was doing to his body was pushing it to the overall title at one of the most challenging Ironman courses in the world. The 29-year-old might have been a rookie to long distance racing, but his impressive 9:19:28 performance on the challenging Muskoka course looked more like one of a seasoned veteran than a first-timer. Thanks to his overall and age group win in Huntsville he now gets to head off to the Ironman World Championship in Kailua-Kona, Hawaii next October. 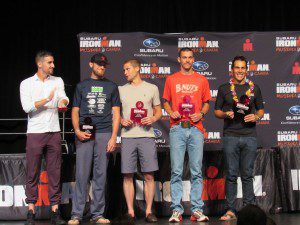 McMillan might not have hand any full-distance experience, but he is no stranger to high level racing. He graduated from McMaster University in 2011, where he trained with, among others, Andrew Yorke and Taylor Reid. Despite those heady training partners, his introduction to the sport came from a much more modest background.

“I had always been a really big kid,” he remembers. “Thanks to my Italian background, there was always food around. When I got up to 265 pounds I started running. Then one year I signed up for the Orillia Triathlon (part of the Subaru Triathlon Series). I was one of the last finishers. From there it started.”

Things came full circle at the finish line in Muskoka. One of the first people to greet him at the line was Janet Fraser, one of the organizers of the Subaru Series.

After graduating McMillan went to Australia for teacher’s college, then found himself more focussed on “real life” trying to get a job once he returned home to Orillia than training. He qualified for the Ironman 70.3 World Championship in Mont-Tremblant last year, but had a self-described “awful” race there. While he’d always wanted to do an Ironman, it wasn’t until the affordable option of an almost-hometown race came along before that became an option. Thanks to the tough environment for new teachers, McMillan has been working as a supply teacher for two different school boards and augmenting his income by working at a restaurant. Once Ironman Muskoka was announced he got the blessing from his long-time girlfriend, Monique Steenman, and started to gear up for the race.

He followed a 24-week training plan that worked up to just over 20 hours a week of training during weeks 21 and 22. Because he lives about an hour’s drive from Huntsville, he was able to do some of his long rides and runs on the course to prepare himself for the big day.

Despite the course recon, McMillan managed to surprise even himself with his time.

Once race day came, though, he had much more than a good day. Despite the complicating factor of Steenman having to attend her best friend’s wedding the day before the race (she drove up on race morning) McMillan’s family and friends were on hand in force to watch him both take the lead and then hold it to the line, ensuring he’ll have a chance to compete in Kona next year.

Since his big race McMillan has enjoyed lots of celebration. Monday night was spent with his hockey league buddies. Tonight will be a big family celebration.

Eventually, though, it’ll be time to look ahead to the big day in Kona. But there’s no hurry on that one. A 9:19 on that tough course in a first Ironman? That’s worth some celebration.