A couple weeks ago, my husband (and awesome coach) Clint, came home from our weekly open water session here in Victoria saying “You should have seen this para athlete at the lake this morning! He swam faster than Brent (McMahon)!” To be fair, Brent wasn’t wearing a wetsuit at the time- but still. Who is this kid?

Stefan Daniel was born with radial dysplasia, a congenital condition that runs through the arm in a longitudinal direction resulting in a radial deviation of the wrist and shortening of the forearm. Stefan’s right arm is more effected than his left.

In what can only be seen as a meteoric rise, Stefan won the Canadian junior national title- in the able bodied category- in addition to winning four Golds and a Silver in the PT4 category of the World Para Triathlon series this year.

I recently had the (mis)fortune of straining my left calf and breaking my right foot in the same week. This left me in a wheelchair for about four days, and I am still currently half way between chair and crutches. Having always been curious about para sport, I took this as an opportunity to learn more, from the exhaustion involved in getting through everyday life, to how to use a track chair and a handcycle. The more I learn the less I know when it comes to para athletes, their lives and their sport.

My first port of call was the home of Karen March, a former paralympic athlete on both the track and the handcycle. Karen graciously arranged for me to try some equipment and –oh man! It is way harder than it looks, especially the track chair. Did you know that you don’t grab and push the rails on that thing? Instead you have a rock hard “glove” that covers your knuckles and you hit and punch the rims, “like spinning a basketball,” Karen’s husband Peter explained. It was not at all what I expected. 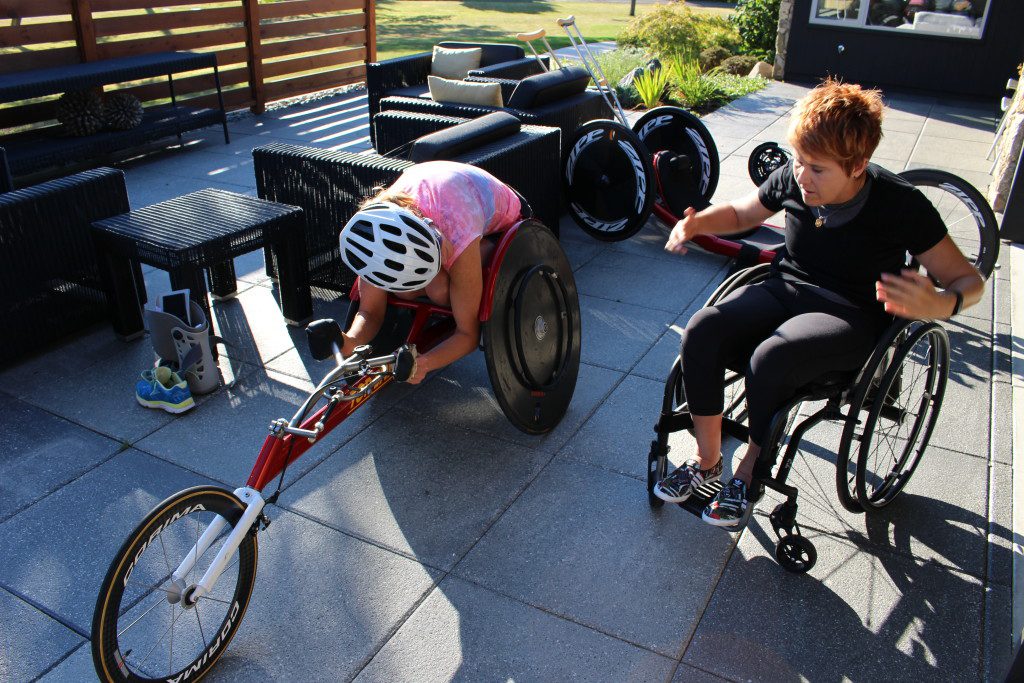 The handcycle came a bit more naturally, but I was a long way from the 20-25km/hr that Karen used to do during her time trials, as the best of the best in her class. And I am light years from the 40km/hr that the most able male handcyclists do.

One theme that runs consistently throughout the dialogue around para sport is the fight to be taken seriously. To be 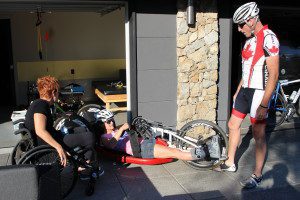 seen as athletes and not disabled. This was brought home clearly in a conversation with Stefan’s coach Carolyn Murray; “The athletes at the top of para sport, the one’s that excite the crowd to go and watch, have worked really hard to get there, just like any high performance athlete.” Since triathlon was announced as a Paralympic sport for Rio, many amateur athletes, who do amazing things at the amateur level, have come out of the woodwork hoping to qualify.

For Carolyn, herself an Olympian before she took up coaching, this has been a challenge. Not everyone can and should go to the Paralympics, just like not everyone can and should go the Olympic Games. Paralympic athletes represent the elite end of para sport, just like Olympians. “Stefan’s a prime example,” Carolyn says; “if he doesn’t have to work, it’s not motivating. The harder it is, the longer he’s going to stay in the sport and the more motivated he will be to go for the next Paralympic cycle.”

Our physical abilities lie on a spectrum, and where we see ourselves on that spectrum will have everything to do with how successful we are in the sporting arena. One might look at Stefan and think he is disabled, but tell that to the other junior boys here in Canada. As Karen says; “When I want to do something, I just figure, there’s a way to get it done.”

As for me, I plan to learn as much as I can about para sport over the next year. As para triathlon makes its debut at the games in Rio, it seems prudent to take a moment to reflect on how best to use our numerous abilities.