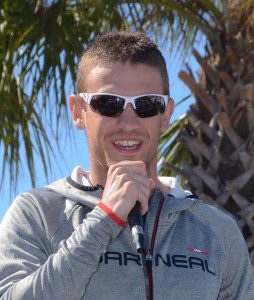 Ontario speedsters Lionel Sanders and Cody Beals put the pressure on Olympian and former 70.3 Ironman World champ Andy Potts in Galveston, Texas today. The pair gave him a bike and run clinic that saw Sanders take his lead for the win and Beals grab a close third place finish behind him. Only a second place finish was missing for Canadians, but Angela Naeth took care of that thanks to a dynamite bike-run combo which got her silver behind Denmark’s Helle Frederiksen.

The race began with Potts’s standard domination in the water as he lead a small pack with his 24:00 min swim in Offats Bayou. That pack included Italian David Giardini who would race the day’s fastest bike split of 1:59:14, heading out of T2 in the lead. Over five minutes behind him was a legal chase pack including Australia Greg Bennett, Potts, Sanders and Beals. After passing Giardini early on the run Sanders would run a 1:12 to take first in 3:45:39. Potts ran 1:14 and finished in 3:47:22 and Beals’s half marathon time of 1:15 took him to third overall in 3:48:21.

The women’s race was equally as exciting as Angela Naeth proved she’s fit and ready for Ironman Texas next month finishing second in 4:13:50. Although she had some swim specialists to contend with making her have to work extra hard on the bike, she came off the bike in fourth after overcoming a deficit from the swim of almost four minutes. The lead swimmers included Lauren Brandon, Helle Frederiksen and Brianna Baird. Naeth, Emma Kate Lidbury and Frederiksen all rode around 2:19 for the 90km course.