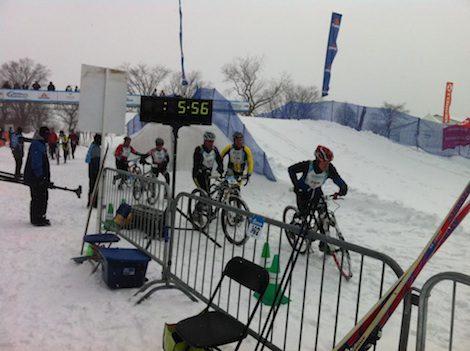 Even while it’s cold out, there are plenty of opportunities for triathletes to race over the next few months. Besides indoor triathlons, Canada is lucky to have a growing winter triathlon scene. These events usually include running, but add in sports like skiing and skating for the other legs. Even if you aren’t familiar with winter endurance sports, your fitness from year-long training should help you get the hang of it. Competing in a winter triathlon is a great opportunity to stay active and challenge yourself to try something new. Here are four upcoming winter triathlons that you can still register and train for.

This pentathlon keeps the bike and run leg of a triathlon and adds a ski, skate, and snowshoe leg for an exciting 28 km course. Athletes can enter as individuals or as a relay team — for those hesistant to take on all five sports in one race, it’s a great opportunity to race with members of your tri club. The event takes place on the weekend of February 27th and 28th in beautiful Quebec City.

Ottawa’s Winterlude includes a winter triathlon as part of the festivities. This year, Ottawa didn’t get the ice they were hoping for on the Rideau Canal so while the event would usually be a skate, ski, run course it’s a run + ski event this year. The run course will be 6 – 8 km and the ski course is yet to be determined. There’s still time to register for the race, taking place on January 30th.

Edmonton Winter Triathlon is a run, skate, ski event that takes place at the Silver Skate Festival inside Hawrelak Park. It’s offered as a solo or relay event, and for those racing in a team you can break it up however you choose with a maximum or five members. The course runs through the park with a run around the periphery, a skate on its pond and a ski through its forests. There’s a 10 km and 25 km option. The event takes place on February 21st.

Quebec’s winter triathlon scene is one of the best in Canada. Besides hosting the ITU S3 Winter Triathlon World Cup (hosted by Pentathlon des Neiges, who runs the Merrell Short Course Challenge as well as many other winter races), they have independent events like Triathlon des Neiges. Held on January 31st at Parc Regional des Greves, the event offers two distances of the run, ski, snoeshoe course. The park is in Sorel-Tracy, a town in southwestern Quebec.