Abu Dhabi, UAE –Frederik Van Lierde can count himself $50,000 richer as he won his second Abu Dhabi International Triathlon title. Van Lierde had a good swim but spent most of his morning mixing it up on the bike with the likes of Eneko Llanos, Fraser Cartmell, Dave Dellow, Paul Ambrose, Tyler Butterfield and Conrad Stoltz. Van Lierde eventually made a move and put some time into Llanos and the others. Coming out of T2 Van Lierde had 34 seconds on Llanos and 1:48 on Butterfield. After the first run lap Van Lierde had increased that gap on Llanos to 1:26 which continued to grow. He eventually finishing in 6:41:01. Eneko Llanos finished second and Tyler Butterfield held on for third. Chris McCormack dropped out early due to a broken finger he sustained in the swim. Canadian Nathan Killam finished in 13th. In the women’s race Caroline Steffen was first out on the bike first followed by Canadian Tenille Hoogland and Michelle Vesterby. Steffen held her lead for the entire bike leg with Hoogland, Melissa Hauschildt and Nikki Butterfield fighting for position right behind. Butterfield eventually had to pull out due to adductor cramping 40 km into the bike. Heading out on the run Steffen continued her lead but two time 70.3 World Champion Melissa Hauschildt was only about 55 sec behind followed by Vesterby and Hoogland. Hauschildt eventually caught Steffen and then put a sizable gap on her. Hauschildt went on to win the women’s race in 7:20:29. Steffen finished second and Vesterby third. Canadian Heather Wurtele came out on to the run course in 8th position but managed to run her way to a 4th place finish. BC’s Rachel McBride finished 7th and Tenille Hoogland 8th. 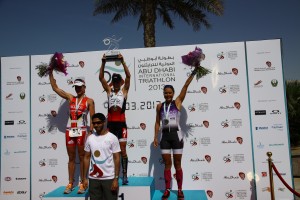