Since last year’s race, the 2018 Ironman World Championships in Kona has been hyped as one of the biggest showdowns in history. From Jan Frodeno’s 2018 vengeance tour to Lionel Sanders drive to become world champion, this year’s race is going to be entertaining.

Since 2014, the race on the Big Island of Hawaii has been dominated by the German’s – Sebastian Kienle, Jan Frodeno and Patrick Lange. However, there is a chance that we could see a men’s champion from somewhere outside of Germany for the first time since 2014. A lot of that chance sits with Canadian Lionel Sanders, who was second last year to the sixth different German to claim the Ironman World Championship title, Lange.

Last year it looked as though Sanders could pull off the win with Frodeno forced to walk in the marathon. That was until Lange pulled off his second-straight super marathon (in 2016 he broke Mark Allen’s marathon course record to finish third behind Frodeno and Kienle) to pass Sanders in the final kilometres of the marathon. Lange went on to set a new course record in taking the title.

Peter Reid, the Canadian who took the Ironman world title three times, always said that the hardest thing to do in the sport is to defend a Kona title. There’s all the media hype. The surge in sponsorship responsibilities. More importantly, though, is the motivation that coming second or third provides to those in the hunt for the world title. Sanders, renowned as one of the most intense and driven athletes in the sport, was already thinking of ways he could improve his run split hours after he finished last year’s race.

“I’m motivated,” he said at the press conference held right after the world championship. “I feel like there’s time on the table, over the marathon. I just have to keep working the nutrition, the electrolytes, working the hydration and, of course, probably better bike pacing would help.”

As Sanders put it during that interview, his “analytical mind wanted to get back to the chopping block tomorrow.”

So, while Lange was celebrating and being feted across Germany as the world champion, Sanders was back in Windsor in his pain cave, honing his skills to go after the title once again.

If you think Sanders was motivated after last year, he had nothing on Frodeno coming out of Kona. The two-time defending world champion was slowed to a walk for much of the marathon on the Big Island. As gutty as it was that he finished, his 70th place finish in 9:15 after a 4:01 marathon – well, it hurt. The rumours were that the next morning Frodeno decided that in 2018 he would take on Sanders at Ironman 70.3 Oceanside, Kienle at Ironman 70.3 Kraichgau (although it is his home-town race, Kienle had to skip Kraichgau to compete at the Challenge Championship) and Lange at the Ironman European Championship as he prepared himself for the world championship. When asked if that was truly the case, Frodeno corrected one aspect of that story. It wasn’t the next morning.

“I may or may not have put down my last beer and said to Felix (Rüdiger), my best buddy and manager, this is what I want to do,” Frodeno said as he prepared for the European Championship in Frankfurt. “He said ‘Thank God you’ve said it, because I’ve thought of nothing else the last three hours.’”

Frodeno has been frightening throughout 2018, “schooling” Sanders (his words, not mine, I assure you) in Oceanside, dominating Lange and a strong German field in Kraichgau, destroying Lange in the marathon in Frankfurt and then running one of the most impressive races in history at the 70.3 World Championship.

“I learned to channel my anger, which has worked in my favour,” Frodeno said in Frankfurt. “It was one of those things, dealing with my results, from a sporting perspective. I’ve turned it into a positive energy.”

It was all positive until a week after the 70.3 World Championship when news broke that Frodeno had a stress fracture. The injury caused him to withdraw from Kona.

With arguably the hands-down favourite for this year’s title out, who are the contenders?

If Sanders was motivated after his runner-up finish in Kona last year, the runner-up finish at Oceanside left him doubly determined to make the changes required to compete for the win on the Big Island. With Frodeno out and Sanders’ attention to detail and making marginal gains, this may be his best chance at the title.

Counting Lange out would be a huge mistake, too. The defending champ was injured for much of the first half of last year, so this year’s build is already well ahead of where he was a year ago. He also now knows exactly what he needs to do to take Frodeno on this October – run better after a fast bike.

Then there’s Kienle, who has become the sport’s main legitimizer for the past few years. Sanders became much more of a legitimate star once he beat Kienle on a regular basis, especially after the two ran together for 16 of the 21 km run at the Championship last year. Frodeno’s 2016 win over Kienle in Kona also saw the two running stride for stride for a portion of the marathon and the win elevated Frodeno’s status even more because it came in a tight race over a former champion.

As much as Kienle is one of the sport’s classiest acts, he’d be much happier taking the wins at those big events. The 2014 Kona champ proved he can win when he’s supposed to, with an impressive performance at Challenge Roth. While some might downplay the win because he didn’t face any of the big names in Roth, it’s important to note that Kienle rode much of the bike ride with Cameron Wurf, the Australian former bike pro who has been turning the triathlon cycling world upside down over the last few years. Last year, in Kona, Wurf destroyed the old bike course record, taking Sanders and Kienle along for the ride. Wurf was never a factor on the run last year, while Sanders and Kienle couldn’t run off the bike as well as they needed to in order to take the win, no doubt thanks to the punishing bike pace Wurf provided.

Kienle’s race in Roth this year provided exactly the kind of test he needed for Kona. Rather than break down after a super-hard bike behind the Aussie speedster, Kienle put together an excellent marathon.

That might just do the trick this year. Wurf adds a wild-card factor to the Kona picture for 2018. He’s been working on his running, following a unique training program that has seen him complete a number of full-distance races this year. A week before he finished fifth in Roth he was third at Ironman France. Wurf will once again look to dominate on the bike and hope that he can gain enough time on the rest of the field to hold on for the win. That’s not likely to happen with so many potential low-2:40 (or even 2:39) marathon runners in the field, but what if Sanders and Kienle can hold their marathon running together that much better this year? What if they choose to follow the Wurf express towards a big win?

Add in the much-anticipated arrival of Javier Gomez to the mix, and the bottom line is we’re in for a very exciting Ironman World Championship men’s race. The last time a Kona rookie (on the men’s side) won the world title was Luc Van Lierde in 1996. Since Van Lierde’s win, almost every men’s champion in Kona has finished in the top three the year before. The only ones that haven’t were previous champions.

Are there other men who could be a factor in Kona later this year? Absolutely. American Tim O’Donnell has finished as high as third in Kona. Another American, Matt Hanson, delivered a scary fast marathon in Texas this year. Last year’s third-place finisher David McNamee has quietly been gearing up for another big day on the Big Island.

In the end, though, its hard to imagine that tradition will change very much. Other than the question mark that Gomez provides, the men most likely to contend for the win are the men who have been contending for the win the last few years. And that list includes a bunch of Germans and one very determined Canadian. 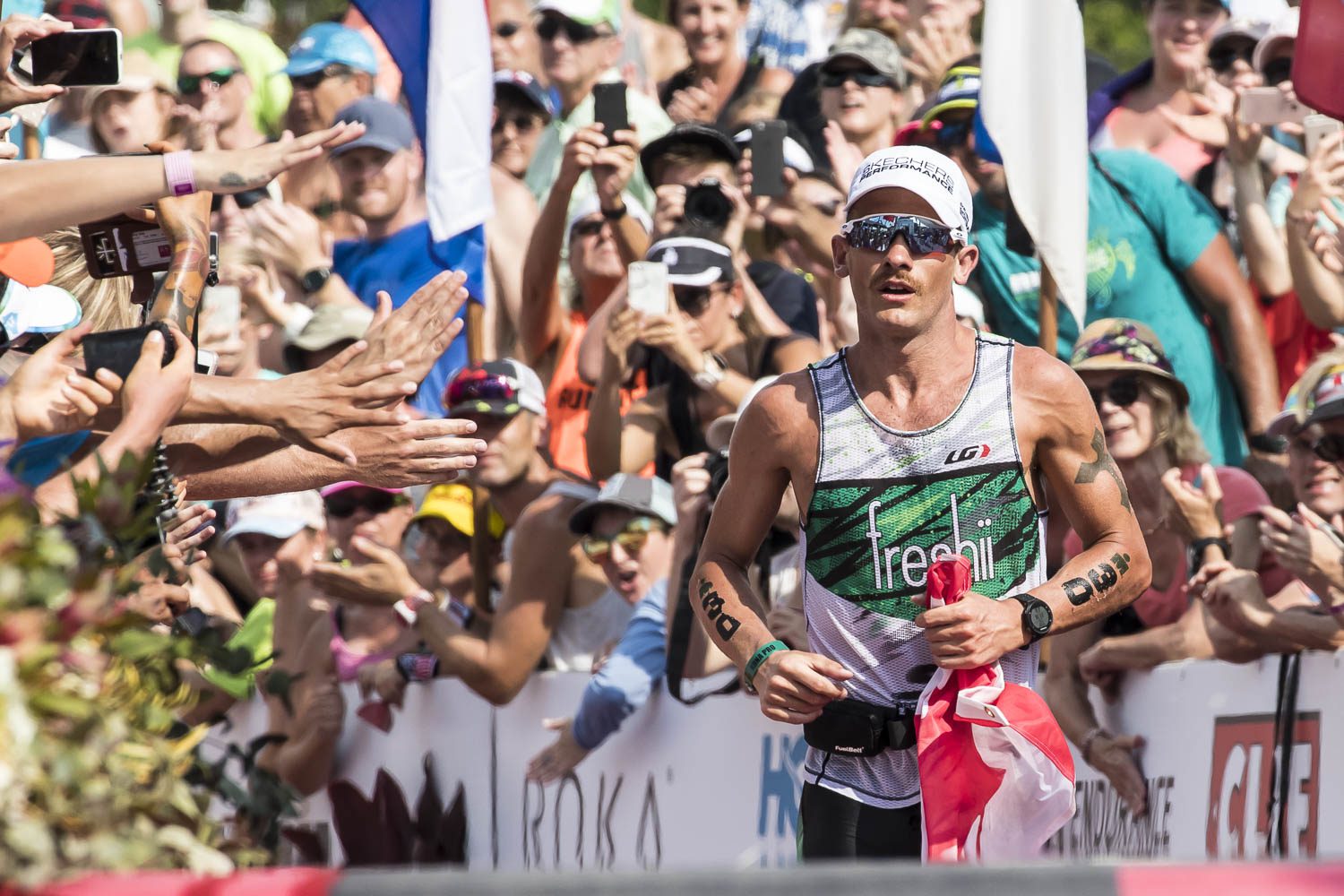