There’s speedometer fast: lots of km/h when you’re zooming down a mountain. But there’s another fast. You’ve felt it when you’re just ticking over the pedals and the bike feels lively and sprightly under your pedals. The new Cervélo S5 is a bike that maximizes that feeling.

With the revamp of the S5 for 2019, Cervélo focused is not just on building a bike that is fast in testing. The company wanted to re-examine what makes a bike fast when a rider is out there pedalling in real-life situations.

“We learned a ton from the development of the C Series about how a bike’s characteristics are determined by a nexus of fit, stability, comfort, and performance,” said Phil Spearman, senior product manager at Cervélo, at the launch for the S5 at the Rocacorba Cycling hotel in Banyoles. He added that matching those qualities to the intended rider would determine the success of a bike.

The new Cervelo S5 on the grounds of Rocacorda Cycling hotel.

Our test bikes came with a full Dura-Ace build.

A very clean front end on the S5.

A view above of the stem and bar combo on the S5.

Still plenty of room for a 28mm tire.

The seatstays and downtube hug the rear wheel to minimize turbulence in this area of the bike.

The only visible cable you'll see on the S5 is the brake hose sneaking out of the fork as it meets the caliper.

The S5 with the Catalan hills in the background.

The R, C and S series bikes are all intended for different riders. The company’s goal with the new S5 was to build a bike for professionals and serious racers looking for a weapon that would give them an edge in any race. What designers wanted to improve on the previous generation’s S5 was the handling and comfort while also increasing stiffness and reducing drag. After my first few rides on Cervélo’s latest update, the company has definitely hit its mark.

What’s New on the Cervélo S5

The biggest change to the Cervélo S5 is in the cockpit. The integrated bar and stem, inspired by the 3T tri bar used on Cervélo’s P5 TT bike, is certainly a polarizing look given how much a departure it is from a traditional setup. But the AB08 bar and CS028 stem serve more than as a controversial pedestal on which to place your hands. The engineers at Cervélo had a method to their madness. That empty space between the shifters serves to keep the airflow unimpeded and attached to and flowing along the top tube and then through the rider’s legs, creating less turbulence and less drag on both rider and bike according to the Cervélo’s testing.

In addition, this setup serves to house the shifting cables and brake hoses. Completely concealed cables and housing, for both mechanical and electronic shifting, was part of the mandate on this new generation S5. The shape of the cockpit allows the cables to be routed through the bars without kinking too much or adding an inordinate amount of extra friction to the system. The same strategy works for passing the Di2 cable through to the front and rear derailleurs.  The S5 will come with fit kits as well which will allow fitters and home mechanics to adjust the height of their cockpit by 30mm without having to rebleed.

In previous editions, the cables were mostly hidden, entering at the down tube. Now they are completely routed through the frame and stem, which was important to Cervélo both for the improved aerodynamics and the bike’s esthetics.

When it comes to geometry, the bottom bracket on the latest iteration of the S5 has been lowered by 2 mm to 70 mm (on a size 54). The change makes the bike feel more predictable and confident when you carve through turns. The trail values (distance from where the front wheel touches the ground to where the steering axis would meet the ground) are now consistent across the size range. The 57-mm trail value, matched with a size-specific head-tube angle, means all sizes of S5 handle the same way. The stack and reach of each size of bike is the same as the previous generation of the S5.

As for the frame design, the biggest changes can be seen on the down tube, which now features a cut-out that follows the shape of the front tire. This feature keeps the air flowing against the down tube longer, creating less turbulence at the front end of the bike. The effect of this and of the other changes at the front end, such as the new stem and bar combo, is considerably less drag: in the wind tunnel, with a rider, the new S5 saved 42 g of drag over the previous model, the equivalent of saving 5.5 watts at 40 km/h. 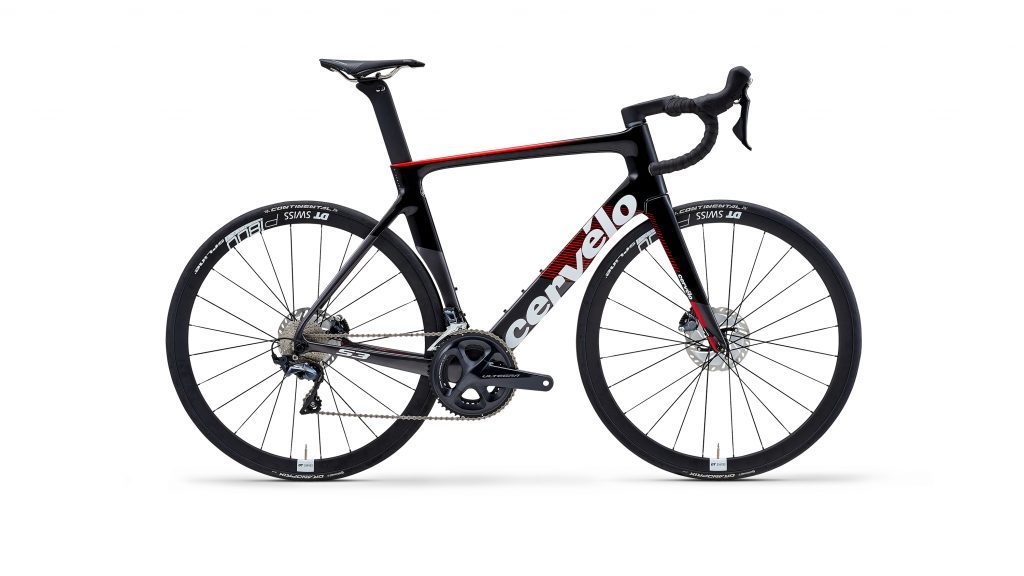 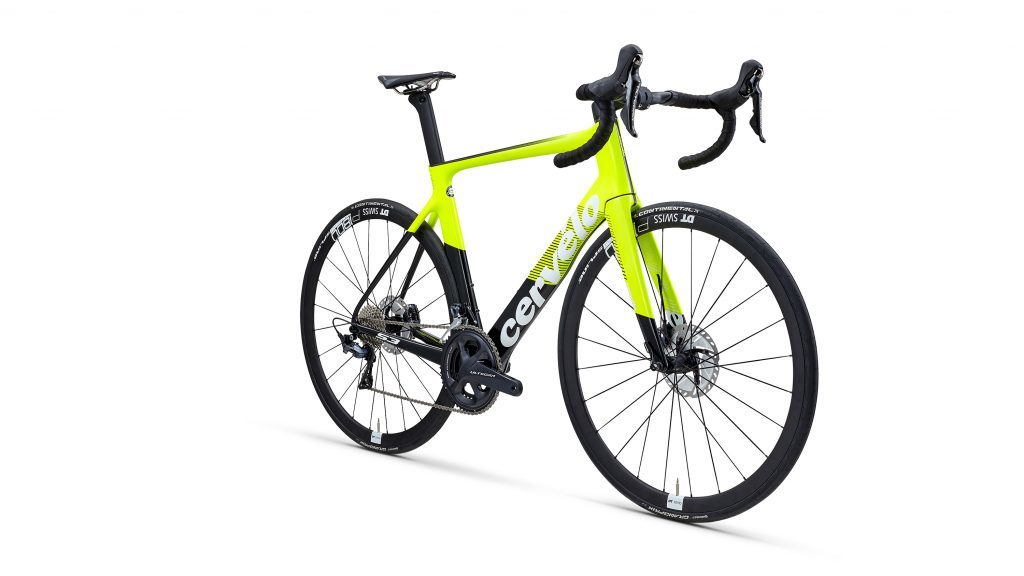 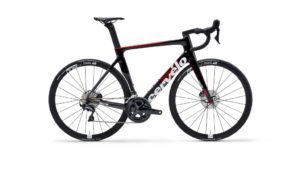 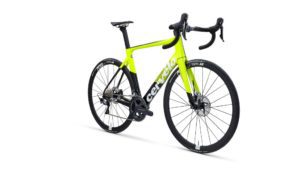 The new S5 is also a much stiffer bike. Changes to the carbon layup have increased the stiffness at the head tube by 14 per cent and at the bottom bracket by a whopping 25 per cent.

Cervélo hasn’t forgotten the S3, which it affectionately describes as the “everyman’s aero bike.” It takes many of the design cues of the S5 but uses a more traditional looking stem. The team at Cervélo was still able to hide the braking and shifting cables completely in both the mechanical and electronic variations. Riders looking for a more budget-friendly option will still see drastically improved aerodynamics and a lighter frameset that still manages to boost pedalling performance thanks to increased stiffness at the bottom bracket and head tube.

First Ride on the Cervélo S5

Known for being the training grounds of many World Tour cycling pros, the roads of Catalunya provide a magnificent backdrop for any ride. For the launch of the S5 Cervelo took us to the rolling terrain surrounding Banyoles and Lake of Banyoles, the site of the rowing competition for the 1992 Olympics. The city is used by many pro cyclists as their European base.

What makes the region a destination for training is the variety of terrain. There are plenty of mountains to climb, while picturesque flat roads snake along the coast. There is also rolling terrain that makes for some fantastic fast and flowing rides perfect for testing out this latest generation of the aero bike.

It’s hard to not to think of your first days of riding a bike when you’re aboard the S5. You get this feeling of effortless speed and freedom that reminds you why bikes are fun. Of course, a great deal of engineering and research goes into making those pedal strokes feel effortless, but when it comes down to it, it’s the feeling—and those Strava PBs.

What made the S5 such a joy to ride is that it inspired confidence to ride faster and push the limits of my descending and sprinting abilities. One descent in particular into Banyoles contained five or six consecutive sweeping turns. Normally I’m more of the cautious sort on unknown descents, but the S5’s geometry tweaks made me feel comfortable enough to cut out to the edge of the lane and sweep back into the apex of the turn. The bike seems to beg you to push the limits of your descending capabilities.

On one flat stretch of road, I turned to a fellow journalist on the trip and laughed about how easy it was to ride at 45 km/h on this thing. I hadn’t sprouted green-jersey winning quads all of the sudden, but I was on a bike that represented the absolute cutting edge in carbon layup and aerodynamics, thanks to the hidden cables and the new cockpit of the S5.

When the road points up, the S5 handles itself surprisingly well. Despite being heavier by 140g  (size 56) to the comparable R model, it never felt sluggish. That’s probably mostly down to the improved stiffness at the bottom bracket. The bike responded immediately to each pedal stroke. The frame was lively and fun when I stood up out of the saddle to get over a particularly steep section. We didn’t have any alpine climbs on our route, but we did have some nice 2.5 to 3 km hills that gave us the chance to see how the bike performed when it was a little out of its element.

This probably wouldn’t be your first choice if you lived, say, in the high Alps, but it did a perfectly adequate job at handling varied terrain where aerodynamics wouldn’t be the No. 1 priority.

It was hard to not feel more than a little disappointed turning the bike into the service course at the Rocacorba Cycling hotel on our final day, and saying goodbye to the smooth, cycling-friendly roads around Banyoles. But this won’t be my last ride on the S5. I’ll be doing a more in-depth review, putting the bike through its paces over some of the rough roads around Triathlon Magazine Canada’s office. Those will be a true test of the claims that an aero bike can also be a comfortable bike.