Twelve hours, 25 minutes and 47 seconds. Or 70 seconds. One is a long race day. The other is just over a minute. Those two times were what decided the day for Sharon Mackinnon. The first was her total time at the 2022 Ironman World Championship. The second was the gap between her and fellow Canadian Sharon McDowell-Larsen as they raced for the 60 to 64 age group championship title in Kona. In the last 12 km of the race Mackinnon overcame a two-minute deficit (a stop at a busy port-a-potty where she had to wait in line meant that she lost her lead), running her way to the win. Throughout that oh-so-close run she was keeping track of her time and pace with the new Apple Watch Ultra. Five months earlier she’d tried to use her Apple Watch Series 7 for Ironman Lanzarote, only to have it run out of battery before the end of the bike. In Kona there were no such issues. The Ultra breezed through the entire race day, and she finished the 3.8 km swim, 180 km bike and 42.2 km run in the hot, windy and challenging Kona conditions with lots of battery life to spare.

Two years ago, I wrote about Mackinnon (who, if you haven’t figured it out already, is my wife) and how the Apple Watch had become an integral part of her daily routine that often includes two and sometimes even three workouts. She wasn’t supposed to try to do the Lanzarote race with the Apple Watch – I had left her with another one to use for the race – but it’s such an integral part of her day now that she never thought to take it off and use something else.

So, two days before the Ironman World Championship, I asked her if she’d like to wear the Apple Watch Ultra for the race. I had been wearing one for a few weeks and was confident that she’d have no issues getting through the day without any issues.

It is a tribute to the ease of use of the new watch (and the strength of the Apple ecosystem) that Mackinnon had no problems figuring out and using the Ultra, and, as far as we know, she became the first world champion to wear Apple’s latest super-watch.

Related: Apple Watch Ultra is ready for your Ironman racing and training needs

Think about that. Until the Ultra, even Gustav Iden, who won the race in 7:40:26, might not have been able to get through the Ironman World Championship wearing an Apple Watch. Now every single finisher could likely get it done. That tells you just how much of a game changer the new Ultra is in the smartwatch space. For as long as I have been reviewing the Apple Watch, I have been quick to say that as a smartwatch and health monitoring tool, it is pretty much untouchable. As a workout tool, though, while it could certainly keep track of your activities reasonably well, it simply didn’t have the endurance or other training features that would satisfy most serious triathletes. If you were a serious triathlete who needed lots of GPS time, Apple didn’t have a watch for you. There were lots of great options out there from companies like Garmin, Wahoo and Suunto. 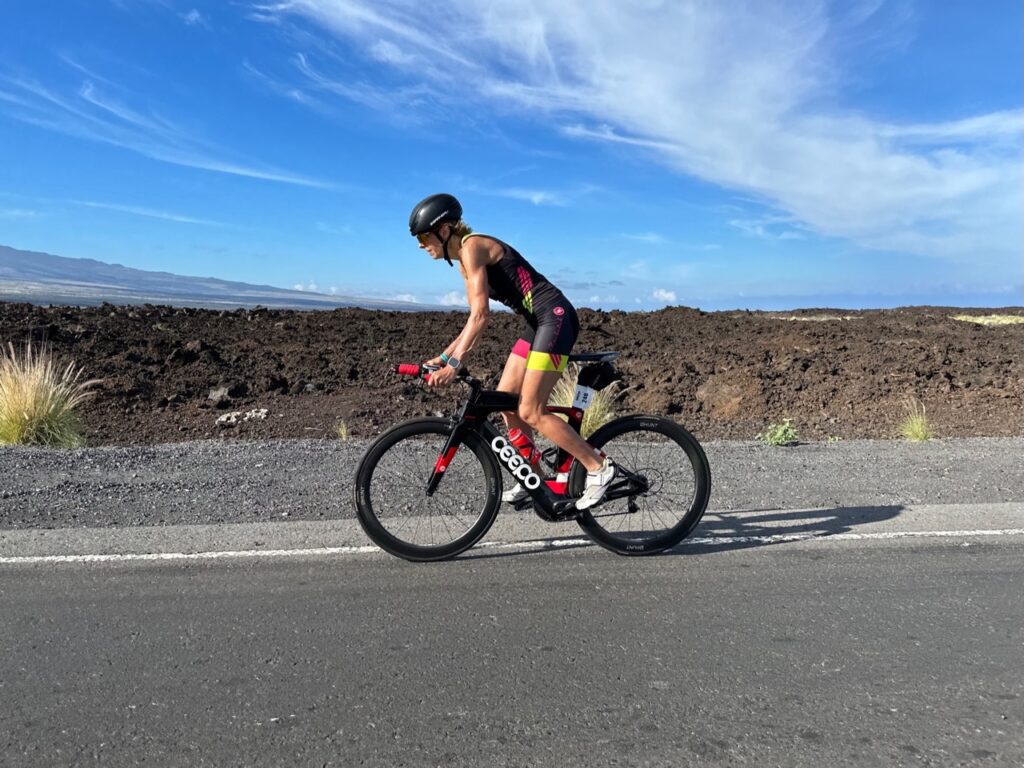 The Ultra changes all that.

A few hours after I got off the plane from Kona, I’m on the phone with Jay Blahnik, Apple’s Vice President of Fitness Technologies. He’s fully aware of what Sharon had achieved just a few days before, “12 hours, 25 minutes and 47 seconds is a time that means a lot to the Mackinnon family,” he says right off the bat. He’s checked out all the tracking data, too – he knows exactly how close the race was. He knows, too, that the new Ultra is opening a new world for the company. But for Blahnik, the Apple Watch Ultra provides much more opportunity that simply finishing a long race.

“We are thrilled that so many people in the endurance world — people who love Apple — but simply haven’t been able to wear an Apple Watch because it wouldn’t have previously been able to accommodate their specific needs —  can now enjoy an endurance event or an adventure with Apple Watch Ultra,” he said. “The great thing about Ultra is that the watch that can help you win a world championship is the same watch that can help you get to a meeting on time, listen to music, pay for the things you want to buy with Apple Pay or even take an ECG. I think what makes it so special is that while Ultra is the most capable and rugged Apple Watch ever,  it’s still quintessentially Apple Watch at its core. It does all the things that you would expect it to do, even when you’re not having an adventure, going to the depths of the sea or competing in a long course triathlon.”

Many of the changes that we’ve seen in the workout app on the Apple Watch were inspired by the knowledge that the Ultra was on the way, a great example of how things at Apple work. In the same way that there’s an iPhone Pro, or a Macbook Pro, people now can wear a watch that offers a bigger screen, considerably longer battery life and an “action” button that opens the door to so much training functionality. (At its simplest, you have a lap button and the ability for precise starts and stops, but that’s just the beginning of all the capabilities.)

What does all that mean? Well, the Apple Watch Series 8 launched at the same time as the Ultra can do so much of what the Ultra can. But there will be lots of people who gravitate to the new watch who won’t have any interest in trying to finish an Ironman.

“There is a very specific user that needs some of the capabilities we’ve built in Ultra,” Blahnik continued. “We think lots of folks will graduate from their Series or SE to Ultra, while many will be brand new to the party because they’ve always needed more battery life than Series or SE would provide. They may not even be elite—they may just enjoy really long hikes and want a watch that can get them through. Whenever we think of the user that might be the primary use case for Ultra, we also think thoughtfully about how to design those features so that they can be available to as many people as possible across all Apple Watches. One of the strengths of the Apple ecosystem is continuity across devices.”

Which is why Mackinnon was able to put the Ultra on and, a couple of days later, use it to win in Kona.

The new Apple Watch Ultra features an aerospace titanium case that sets off the initial impressions of the new watch – it’s tough, looks great, but also remains quite light. The titanium even extends up and above the front crystal to protect from front impacts.

That flat, sapphire crystal on the 49 mm case that shows a big, bright display that can show up to six metrics at once. The biggest addition for triathletes, though, is the new “Action” button that makes the Apple Watch Ultra an invaluable training tool. The game changing button allows serious triathletes to set precise starts and stops, laps and much more. In keeping with the outdoor/ adventure theme, the buttons on the Ultra are designed to be used while wearing gloves – the Digital Crown is 30 per cent bigger than on other Apple Watches, too.

There are a variety of bands available for the Ultra for different activities including Alpine, Ocean and Endurance. The bright yellow Ocean band is our favourite – not only does it make a statement, but it’s extremely comfortable and dries quickly.

The Apple Watch Ultra features the biggest battery seen in one of Apple’s wrist devices, offering a whopping 36 hours of battery life that can be extended to 60 hours on low power mode, a feature that should be available on the watch by the time you read this. As we noted earlier, you’ll have no issues getting through an Ironman, and you can go for days between charges if you need to.
Once the new low power mode becomes available, you’ll get that 60 hours of battery life without losing much functionality – it turns off the always-on display, reduces cellular connectivity and limits some background features. Workouts still retain full GPS and HR readings. Low power mode can also be turned on just for workouts.

The Ultra offers dramatically improved GPS performance by using a dual frequencies (L1 and L5) to provide accurate GPS. There’s also a redesigned compass app and backtrack feature that will allow you to retrace your steps should you find yourself in trouble. There’s even a built-in siren that can be heard up to 180 m away.

That new action button can be set to allow you to immediately start a workout, and you can use it to accurately get lap times. While the Ultra will automatically detect when you’ve moved from swimming to cycling to running (and even the transition) during a multisport workout, you can use the action button to get precise times as you move through each stage of your race, too.
The Ultra is so ready for adventure activities that it is even designed for water sports – this fall Apple will release a new dive app for certified scuba divers. It is twice as water resistant as previous Apple Watches, so triathletes will have no qualms about using it for all their training.

The new Apple Watches utilize improved accelerometer and gyroscopes to detect extreme impacts and sudden changes in speed. So now in addition to the fall detection capabilities of the Apple Watch while you’re walking, running or cycling, your watch can reach out to emergency services or contacts if you’re in a crash, too.

Part of the Apple ecosystem

The launch of the Apple Watch Ultra and Apple Watch Series 8 was part of a busy Apple event that included news about new iPhones (14 and 14 Pro), along with an update to the AirPods Pro earbuds. We had the chance to pair the Ultra with the iPhone 14 pro and the new Airpods, and were impressed with all the new features. Many are raving about the new “dynamic island” that replaces the old notch and displays animations for system actions like playing music or timers. For us what separates the iPhone 14 pro is the spectacular camera – we took all the photos for this feature with the phone. Using the Pro Raw capabilities of the phone allows you to take high resolution photos of up to 48 megapixels. (For non-camera buffs, trust us, it’s a lot.)

The new AirPods offer impressive noise cancellation, but most triathletes will be drawn to the Adaptive Transparancy capabilities, which allow you to listen to music or a podcase while working out and still hear the environment around you, but will reduce really loud noises like a jackhammer or a siren.