We reported that Kristian Blummenfelt would be riding a new prototype Cadex bike in St. George, which obviously worked well as the Norwegian blasted his way to the Ironman World Championship title on it. This weekend, as he looks to go under seven hours for a full-distance triathlon, all of the men pacing Blummenfelt during the bike ride will also be riding the new Cadex frame.

Even though Cadex is still keeping a lot of the details about the new ride under wraps, we managed to catch up with Jeff Schneider, Head of Product & Marketing for Cadex/ Giant, for a deeper dive into the tech behind the new bike. Here’s some of what we learned:

And, because the Norwegian Olympic gold medalist likes to ride in a very forward and aggressive position, fitting him on Giant’s Trinity triathlon and time trial frame was a challenge. With Blummenfelt looking to compete in the Sub7/ Sub8 Project, Cadex looked to design a new bike that might help, both in terms of speed and position. You’ll still see Blummenfelt on a Giant Propel frame when he’s competing in draft-legal races. Because he’s sponsored by Giant, Blummenfelt’s training partner and two-time 70.3 world champ, Gustav Iden, can’t ride the new frame. (That might change for Kona, though.)

Cervelo’s P5X signalled a huge change in the triathlon bike industry’s approach – instead of just focusing on a fast bike, the goal was to improve the aerodynamics of the bike, the rider on the bike, and all the nutrition and hydration needed along the way. Cadex followed that approach with this new frame, too – “we put as much as we could that goes on the bike into the bike,” Schneider said. Everything from an internal 900 ml hydration bladder, a Bento box capable of holding 12 gels and an easily accessible tool box are built into the frame.

So, is the new Cadex bike faster in the wind tunnel than Giant’s speedy Trinity frame? According to Schneider, the bikes are very comparable, but Blummenfelt tests faster on the new bike because of the ability to dial in his position a bit better.

The goal with the new frame was to ensure that the rider could stay in an aero position for the entirety of their effort. The “complete system” approach helped on that front, as does the adjustability of the front end – the handlebar is built in two pieces to provide more fitting options.

The aerodynamicist involved in the Cadex project comes from a Formula 1 racing background, and helped with the design that helps push some of the air through the bike rather than around it. That’s why Cadex went with the wide front fork, similar to that seen on the Hope HB.T track bike used by the British team at last year’s Olympics in Tokyo. There’s also a fairing on the bar that houses all the electronics for the components. 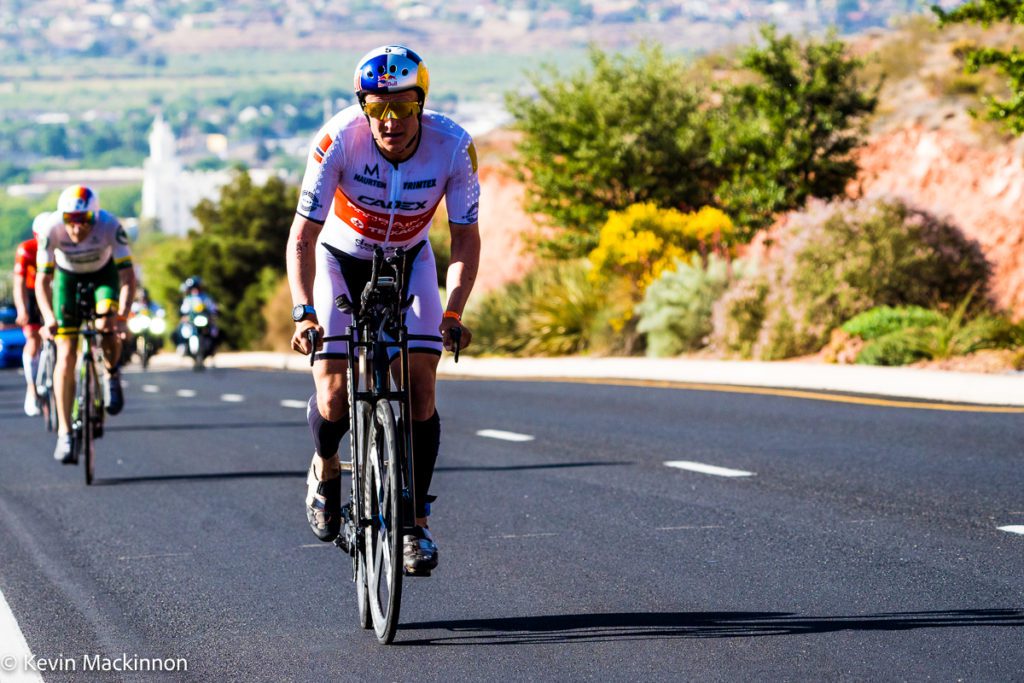 The new bike has disc brakes, while the Giant Trinity does not. That means the wheels Blummenfelt is using – the four-spoke Cadex and rear disc – are also specially designed for the Norwegian. Cadex has also built a four-spoke rear wheel for Blummenfelt to use in Kona – it has a deeper profile than the front four-spoke wheel.

Will the rest of us get to ride one?

Yes. What started off as an exercise to see what would make Kristian Blummenfelt faster will actually become a production bike. The time frame for that is still to be determined, but eventually we’ll have more details. In terms of weight, Schneider says that the bike isn’t the lightest of the “super-bikes” on the market, but it isn’t the heaviest, either. The ride is said to be similar to what we’ve seen in Giant frames over the years – lots of lateral stiffness for performance, with a compliant ride for comfort.

How fast will Blummenfelt ride on Sunday?

It would appear that Cadex is looking to use this weekend’s Sub7/ Sub8 Project as both a testing ground and launch opportunity for the new bike. While the folks at Cadex would be thrilled to see Blummenfelt blast to the day’s fastest bike split, following with that “system” approach, achieving the sub-seven hour performance is the main goal. If Blummenfelt can hit his goal of riding a 3:45 bike split expending as little energy as possible, then run a 2:25 marathon (or faster), everyone will be very happy. (And we’ll likely see a Sub7.)