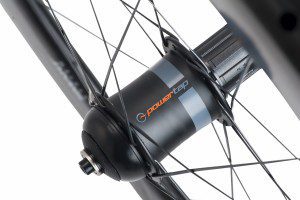 PowerTap hubs have helped define the entire industry. The hubs can be built with just about any rims and make for easy transfer between bikes, but it does limit options if you race and train on different wheels. With three levels of hubs, there’s a wide range of price options and the G3 Hub provides, perhaps, the most value on the market.

Equipped with eight strain gauges, the unit is remarkably precise, measuring within 1.5 per cent accuracy. A single CR2032 watch battery, lasting up to 300 hours of riding, powers the ant+transmitter. Although reliability was once a concern for PowerTap, the wireless design is bang on. The PowerTap installation is quick and easy and fits any frameset using a standard wheel axle. 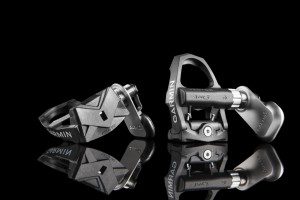 The biggest perk of the Vector pedals is transferability from one bike to another. But, the process is more complex than mounting standard pedals. Establishing proper calibration is required before every ride. The Look-compatible pedals measure the force applied through sensors installed in the pedal spindle and pod which contains an accelerometer (for cadence). This is combined with the distance the crank travels to calculate power in watts. Vector measures total power output but also output from each leg individually. Compatible with any ant+ head unit as well as the Garmin Edge series and the Forerunner 910XT.

To maintain accuracy, you must regularly update Garmin firmware. The pods contain the batteries (one CR2032 per pod) and are sensitive so must be positioned not to hit the ground. Garmin’s Vector S value option pedals measure power on only the left side for $1,000. 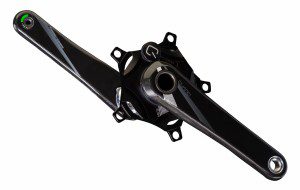 The top tier model from Quarq, the Elsa incorporates all the features that the established power players offer. The electronics are housed in the spider, measuring the total power produced by the left and right leg together. Quarq’s proprietary Power Balance algorithm is able to provide an estimated split for each leg, displayed as a percentage. Built-in temperature compensation means that temperature swings are no longer a problem for Quarq, ensuring the Elsa’s readings are accurate to within 1.5 per cent. With conveniences like ant+ ID, led to indicate a functioning unit and user replaceable battery with claimed 300 hrs of battery life, the Elsa is one of the more user friendly unit in the market. Available in two versions, the R for five-bolt crank arms and the RS for Shimano style four-bolt crank arm, the Elsa is compatible with virtually any modern 10- or 11-speed drive train.

One of the most feature-rich units on the market, the second-generation Pioneer unit independently measures left/right power, rather than an inferred split. Pioneer’s power meter is ant+ enabled, and will work with many of the popular head units available. When combined with Pioneer’s own sgx-ca500 head unit, however, the Pioneer power meter will also display force information throughout your pedal stroke, similar to the Spin Scan function on a CompuTrainer, telling you where you are efficiently applying power and where it’s lacking. At present, the unit is only available on Shimano’s Dura-Ace and Ultegra cranks, which are, fortunately, some of the best shifting cranks and chainrings on the market. 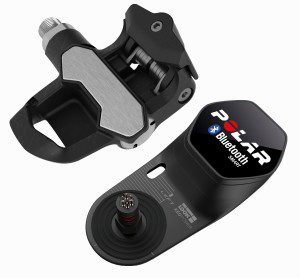 Among their many benefits, the Look Keo Power pedals offer the chance to improve pedalling technique from left to right when used in conjunction with the Polar CS600 or CS600X computers. The pedals measure current and average cadence. They’re super easy to switch between bikes, allowing you to ride the road, the trails or the trainer with equal precision. Another bonus is how quickly the computer finds the power meter and automatically calibrates whenever
they’re turned on.

The pedals display splits in real time and measure the force you exert at all directions via eight strain gauges. The one limitation of the pedals is Polar’s proprietary transmission protocol, meaning Keo Power is limited to Polar computers. 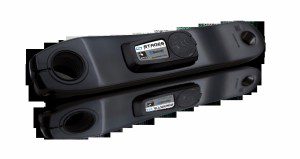 The major perk of the Stages power meter is its relative affordability thanks to the single-sided (left) measurement. The metal left-crank arm for Shimano, sram or fsa simply bolts on your existing compatible crank. It measures your left leg power and doubles it to determine total power. Calibration simply requires holding the crank-arm vertically up or down vertical and letting it sit for a second. It’s designed to get 200 hours of battery life per CR2032 battery. ant+ signal readable by head units such as Garmin’s Edge series, and a Bluetooth 4.0 signal for smartphones.

Stages is consistently accurate. The ease of setup and calibration makes it excellent for travelling.