Once I was able to pry the CFR Disc Di2 from our photo editor, who shot the bike for the March Buyer’s Guide issue of the magazine, I was in a hurry to spend some time on the flagship edition of the Canyon Speedmax lineup. It didn’t take long before I could see why you’ll see triathlon stars like Lionel Sanders, Jan Frodeno, Patrick Lange, Sarah Crowley, Laura Philipp, Daniela Bleymehl and Imogen Simmonds riding the bike – Canyon has pulled out all the stops with the CFR Disc Di2 to ensure you get a very aero and very aggressive ride. Which makes sense – if you’re looking to spend over 13 grand on a bike, you’re probably looking for something that is going to gain you a few valuable seconds, and “aggressive” probably fits the bill.

What separates the CFR Disc from the less expensive CF SLX models is the carbon used in the frame. The top-of-the-line CFR features Toray M40X carbon fibres. That shaves off some weight (1,480 g for the CFR vs 1,560 g for the CF CLX), but also adds a nice mix of comfort and responsiveness. At 9.14 kg (just over 20 lbs), the Speedmax CFR Disc isn’t exactly a lightweight, but it feels like a much lighter bike when you start to climb or power in and out of corners. The added lateral stiffness makes the bike truly responsive and even nicer for climbs, but doesn’t affect the comfort of the ride, for the most part. (I’ll qualify that in a minute.) Aerodynamics are enhanced thanks to the deep-profile fork that even covers the brake caliper and, needless to say, cable routing is all internal. According to Canyon both the CFR and the CF SLX bikes test nine to 12 watts faster than the previous Speedmax bikes. That’s some heady stuff, considering Frodeno and Lange rode the previous version to course records in Kona. 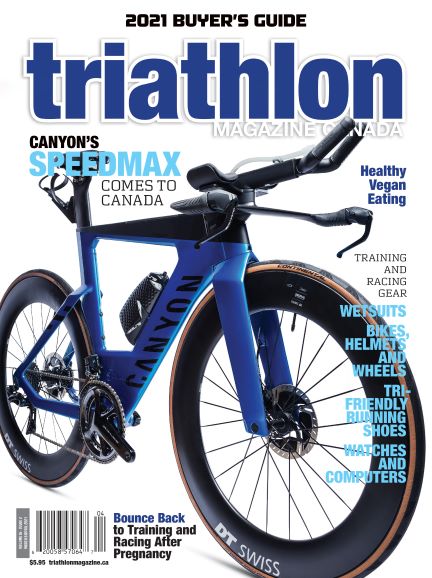 Everything about the Speedmax CFR Disc is designed to help you go fast. Like all high-end triathlon bikes these days, Canyon has ensured that there’s lots of adjustability built into the bike to ensure that you can dial in a comfortable position. As we all know, there’s no point being super-aero on a bike if you can’t maintain that position throughout your ride. The Speedmax CFR, though, really allows you to push the limits on the setup. When it comes to adjustability for the cockpit, the CFR Disc features a monospacer system that offers a whopping 110 mm of height adjustability. (That mono-extension is attached to a really sharp-looking basebar that includes ergonomically optimised grips.)  Moving the bars in and out to find the right extension is a breeze and you get an impressive 132 mm of length adjustment. It’s also easy to adjust the width of the pads. The setup does lend itself to the narrow-elbow position that you see riders like Jan Frodeno use to set world-bests and Kona records. I had to set up a slightly wider elbow position to be able to maintain a comfortable position on the bars – once I had that dialed in I was actually most comfortable riding in the aero position, which is, I guess, exactly what you want in a triathlon racing bike.

The other aspect of the “aggressive” nature of this bike is it is very responsive. That makes for great handling into and out of tight corners, but for those not used to a bike that reacts as quickly, it might feel a bit twitchy. There’s a reason that athletes like Jan Frodeno like the Speedmax – they want to be able to push the limits on all aspects of the course.

Related: Everything you need to know about buying a Canyon bike in Canada

Our cover-model bike, which retails for $13,399 and can be ordered on Canyon’s website, features Shimano’s top-of-the-line Dura-Ace Di2 groupset, which includes a dual-side power meter. The wheelset is DT Swiss’s tubeless-ready ARC 1100 Dicut, which has been used for some of the fastest bike splits we’ve seen in Kona over the years. There’s not much to say about any of the components the bike comes specced with other than they are excellent. The Dura-Ace Di2 gruppo is rock solid and provides outstanding reliability and durability. The power meter is really easy to work with, too – it is very easy to set up and provides all the data you’ll want. Rather than use the available computer mount, which sells for $39.95, I just connected the power meter to Wahoo’s Rival watch, which kept the front end nice and sleek while still allowing me to access all the information I needed with just a glance at my wrist.

I’ve long been a fan of the ARC 1100 Dicut wheels, and that didn’t change after spending more time on them for this review. The wheels are stiffer than Zipp’s 808 or 858 wheelsets, which you’ll definitely notice on rougher roads. That stiffness helps with the aggressive, reactive ride I mentioned earlier. It is a bit of a tradeoff, though. You might want to go for a more forgiving set of wheels while training, leaving the ARC 1100s for race days when you’re ready to really go for it, but I was quite happy to spend all my review time with the DT Swiss wheelset. 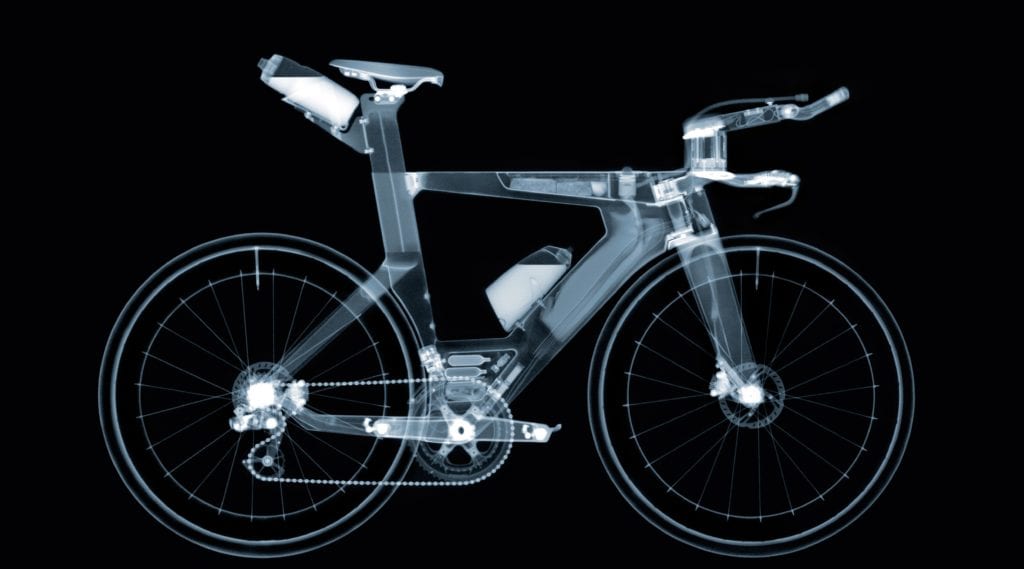 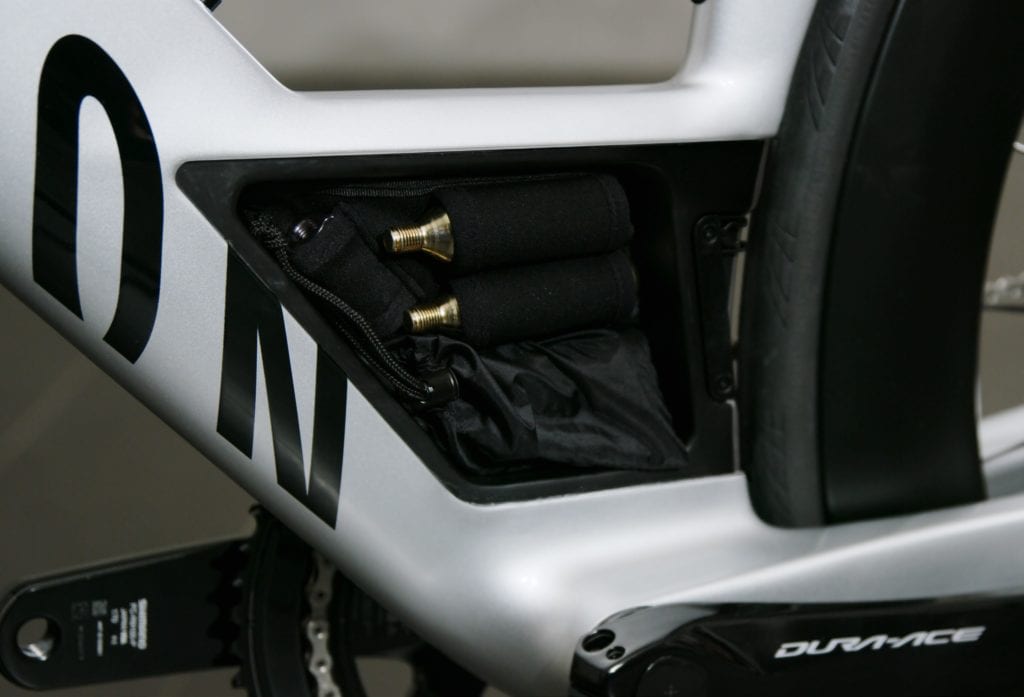 It’s not hard to see how the world’s top athletes can use a bike like this to power through the bike leg of any non-drafting event. All the energy you put into pushing down on the pedals seems to drive you forward. None of which helps, though, if you can’t maintain an aero position. In addition to the extremely adjustable front end, the CFR Disc features an internal hydration system with a straw that integrates into the wireless cockpit and clips with a magnet to the aero extension. I do wish that magnet was a bit stronger, as I found the straw would shift off the extension quite easily. There’s also an internal bento box on the top tube that’s easy to access that provides excellent storage for bars and gels, and a really well-designed aero tool kit just about the bottom bracket that’s easy to access and allows you to pack a tube and quick fill without sacrificing any aerodynamics at all. 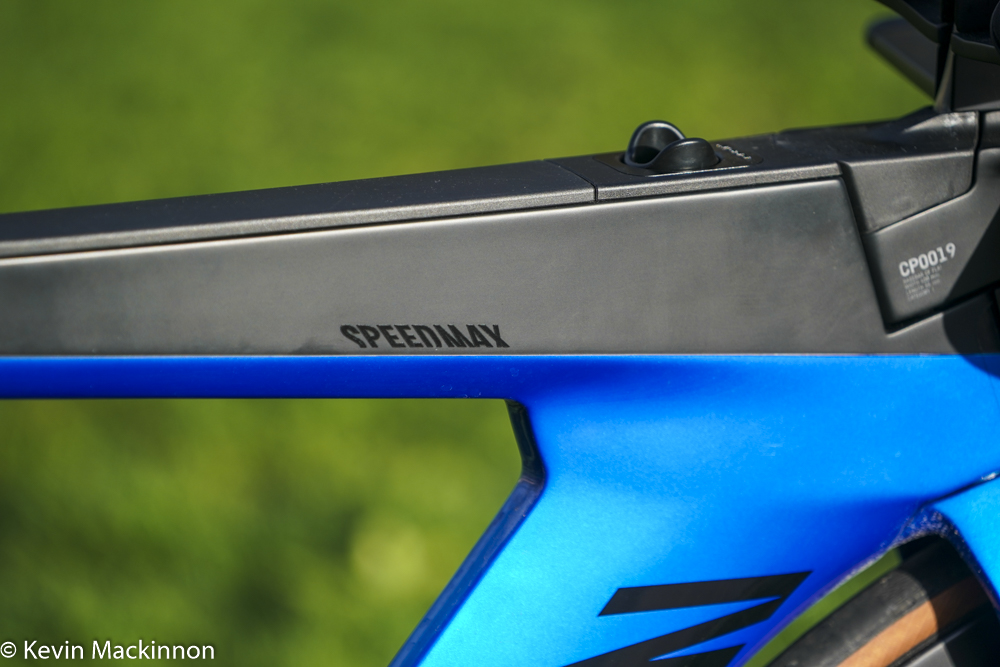 The Canyon Speedmax CFR Disc Di2 is a bike that pulls out all the stops in the search for the ultimate bike split. While it would be nice if the Speedmax was a bit lighter, aerodynamics, which is truly the deciding factor when it comes to fast tri bikes, is certainly at a premium here. It’s hard to imagine how you could blame anything other than your fitness on a disappointing bike split if you’re riding this bike, which is exactly what anyone looking to race at the top of their game wants.

So what might hold you back from getting one? Canyon’s online sales process typically makes their bikes a bit more affordable than the competition (most comparable high-end models from other companies will sell for at least $1,000 more) but, at $13,499, this is still a very expensive bike. That online process also takes your local bike store out of the equation, too, and many of us have long relationships with a store that influence our bike purchases.

Saving some money on a bike that is arguably one of the fastest in the world sure does sound good, though, and Canyon certainly has got the online process dialed in. Many Canadian’s have been anxiously awaiting the chance to buy Canyon bikes here, which finally happened this spring. Canyon’s biggest issue now appears to be keeping bikes in stock as demand has been quite high.

Those in the hunt for a top-of-the-line bike should definitely have a look at the Speedmax CFR Disc Di2, but be prepared – you won’t be able to blame a poor bike split on your bike.