A few years back, I started getting competitive in cycling. Because I was never really a numbers guy, I stuck to watching my cadence and heart rate as a way to monitor my efforts and training. When I later added the swim and run, I developed an interest in splits and training stress scores. But in the numbers-obsessed sport of triathlon, all the rage is around power. It is the one metric that everyone cares about and pretty much the first question a triathlete will ask you is: “What is your FTP (functional threshold power)?”

So, earlier this summer when a pair of Garmin Vector 3 Pedals showed up on my desk at the Triathlon Magazine Canada office, my curiosity was sparked and the estimated power setting on Strava wasn’t cutting it anymore.

Setting up these pedals on my bike was a breeze – it was easier than changing a flat tire. Just grab a wrench, place the pedals into the crank arm and screw them on, same as any non-power measuring pedals. Then, all you have to do is pair the pedals to your Garmin. The Vector 3 will pair with Garmin’s Edge and ANT+ compatible computers. They are also compatible with a select number of Garmin Forerunner and Fenix watches – ideal for multisport athletes.

To pair, simply go into your ride settings and search for equipment. You will get some prompts to correctly match the Garmin Vector 3 pedals to your Edge computer. This all takes under five minutes, so if you’re like me and leave bike maintenance to the last minute, this is a quick set up before your early morning group ride.

The easy setup and installation also make the Garmin Vector 3 pedals ideal for travel and transfer, something that was greatly appreciated when I packed my bike four hours before my flight.

You will want to make sure you put on the Garmin provided cleats though. They may look identical to the Look – Keo cleats, but there are subtle differences. By using the Garmin cleats, you will ensure the utmost accuracy in the metrics of the Garmin Vector 3 pedals record.

The Garmin Vector 3 pedals also have a much cleaner look compared to its predecessor the Vector 2. The previous model had a chunky pedal pod which made the installation phase time-consuming and were fragile to boot. Without the pods, the Vector 3 look and work like any standard pedal you would see on the road, all while transmitting your power metrics.

During the initial phase of my testing, I decided to do an FTP test on the roads north of Toronto. I did this because I wanted to set a baseline for subsequent training sessions, races and tests, and I wanted to get acquainted with the data recorded by the Garmin Vector 3 pedals.

Once I had my numbers, I spent the next three months training with the Vector 3 pedals, learning their ins and outs and how to use power to optimize my training. Equipped with some pretty impressive features, there is a lot to dig into with the Garmin Vector 3.

Along with the expected power and cadence readings you would expect, the Garmin Vector 3 pedals offer a wide variety of measurements. For example, the Vector 3 pedals are able to measure your L/R leg balance. After a few rides, I opened my files in Garmin Connect and noticed a trend of relying on my right leg. With that in mind, I approached my subsequent training sessions with the intent of improving my leg balance. With real-time and post analysis feedback, I saw my pedal stroke balance improve, and my leg balance improved. And that isn’t all the Garmin Vector 3 pedals measure, they also record your seated and standing time during a ride and even provide feedback on your cleat position.

All these cycling parameters can be viewed and recorded on your Garmin Edge head unit thanks to ANT+ and Bluetooth – enabled connectivity. With the easy transmission of data, stats from your ride are easily saved and sent to your Edge cycling computer and Garmin Connect account. I found that viewing the cycling dynamics recorded during my sessions were most beneficial during a post-ride analysis. However, the cycling dynamics like leg power distribution and balance were useful during a training session when I was working on my pedal technique.

To test the accuracy of the Vector 3 pedals, we did a few rides running multiple power meters at the same time, comparing the Garmin Vector 3 to Shimano’s Dura-Ace R9100-P, a crank based power meter, and the CycleOps Hammer direct-drive trainer, and analyzed the results afterwards. 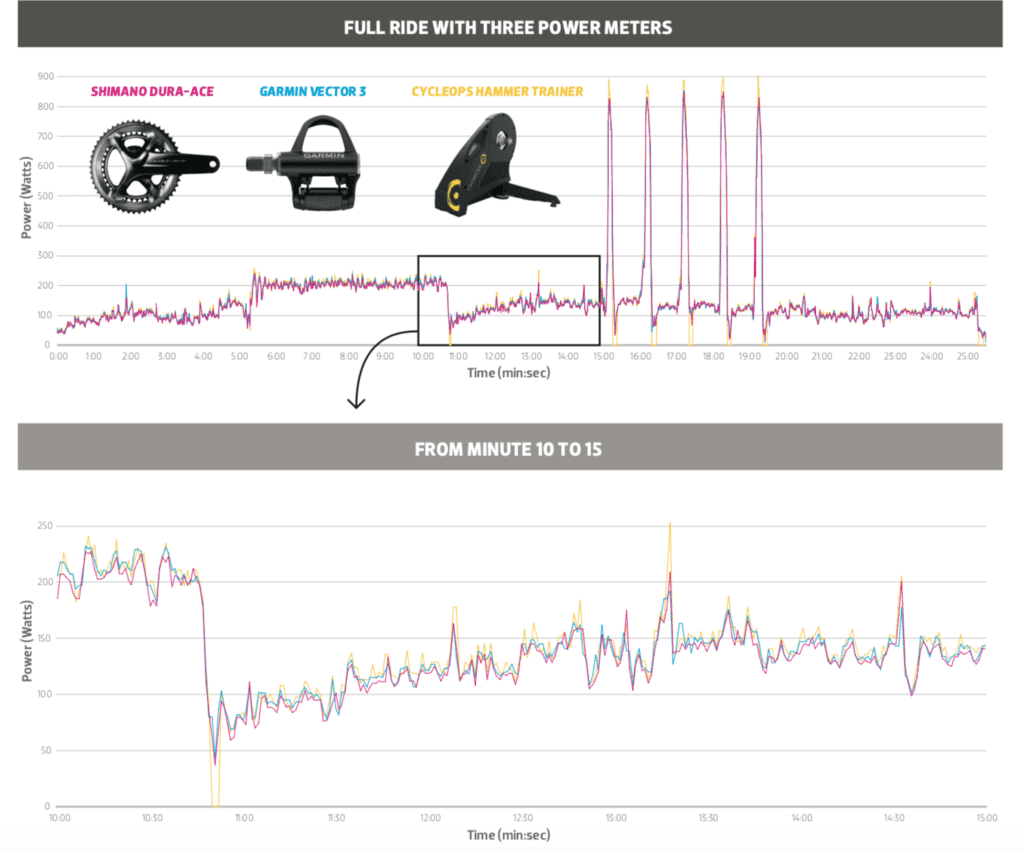 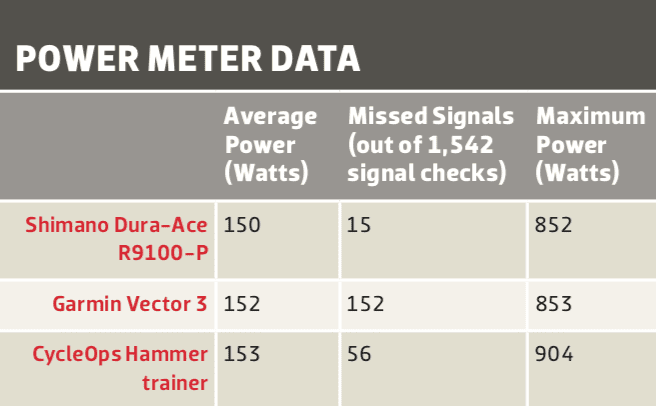 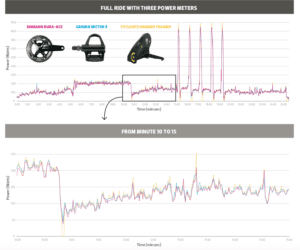 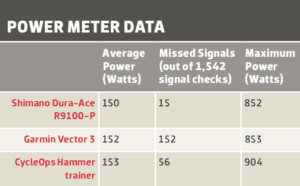 Garmin claims 120 hours of battery life on the Garmin Vector 3 pedals, which is roughly in line with our experience, especially after we updated the firmware. As with many hi-tech devices, companies are always coming out with new updates to the software they run their equipment on to optimize performance and remedy any issues. So, while the new software installation prompts may seem annoying or feel like a hassle, its worth it. The Vector 3 makes this easy with updates done wirelessly via Bluetooth.

New to the Garmin Vector line is the single-sided pedal option – the Garmin Vector 3S. It essentially provides the same readings as the 3, but only from one leg. You won’t get readings like leg balance or pedal positioning. But it will save your credit card from taking a hit. And if you later decide you want to upgrade to the dual-sided modal, all you have to do is buy the other half.

Garmin’s line up of Vector power meter pedals have always delivered a wealth of data and features, along with good data accuracy. The Vector 3, their latest update, continues that tradition in a more robust and user-friendly form factor.