Indoor cycling is having a moment and, with it, structured training and power data have become much more mainstream. As more cyclists seek to bring the benefits of training with power outdoors, power meters are having a moment as well.

When it comes to measuring power, pedal-based power meters are emerging as some of the most universally compatible, affordable (relatively speaking) and easy to install options. Within the last few years, one brand, Favero, has managed to outshine some bigger companies in the blossoming pedal-based power meter market.

Related: Why should triathletes use a power meter?

I tested the Favero’s dual-sided Assioma Duo power meter pedals and I have (almost) only good things to say about them.

The Duo pedals each have a pod on the pedal spindle which houses the power meter internals. The pods don’t affect the Q-factor, which is a standard 54mm, though some riders with particularly wide feet have reported having to shift their cleats over slightly to avoid hitting the pod.

The circular housing pod has little embedded LED lights that blink pleasantly when you wake it up, and I personally think they look kind of futuristic. Others have told me they prefer a classic-looking pedal, without the bulky addition. To each their own. 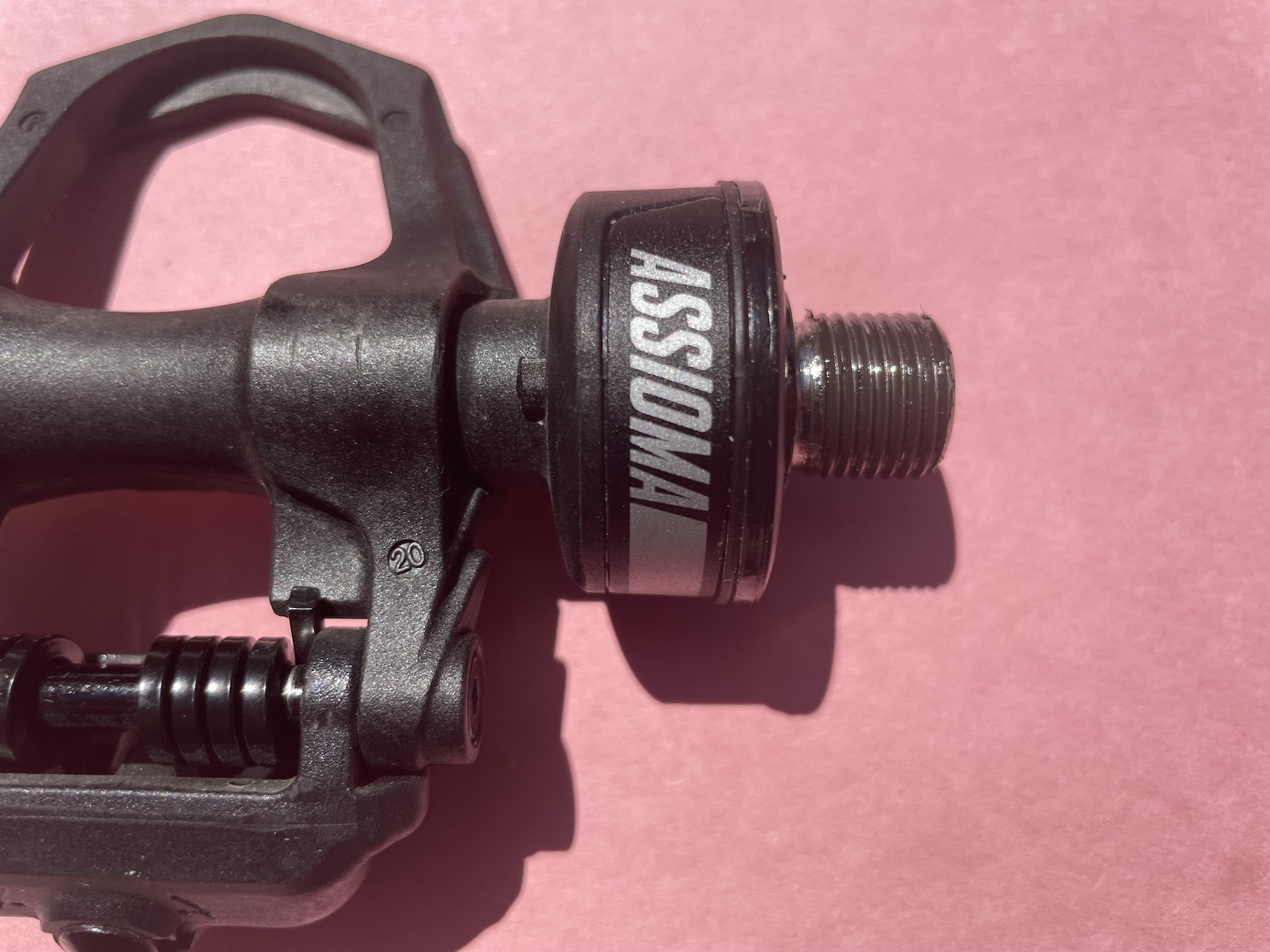 Because the electronics are housed in the pods, any damaged pedal bodies can easily and affordably be replaced.

Charging the pedals is very simple—a long USB cord magnetically attaches to each pedal pod with a satisfying click. You can check the battery status on your head unit. Favero says the batteries have about 50 hours of life, which tracked pretty accurately by my calculations. I charged them when I got a low battery signal, around 40 hours of riding, which Favero says is sent eight hours before the battery is completely drained.

The pedals install like any others and even come with an 8mm Allen key. The Assioma app is required to input your crank length and to find any firmware updates. The Assioma Duos communicate via Bluetooth and ANT+ with bike computers and smartphones. 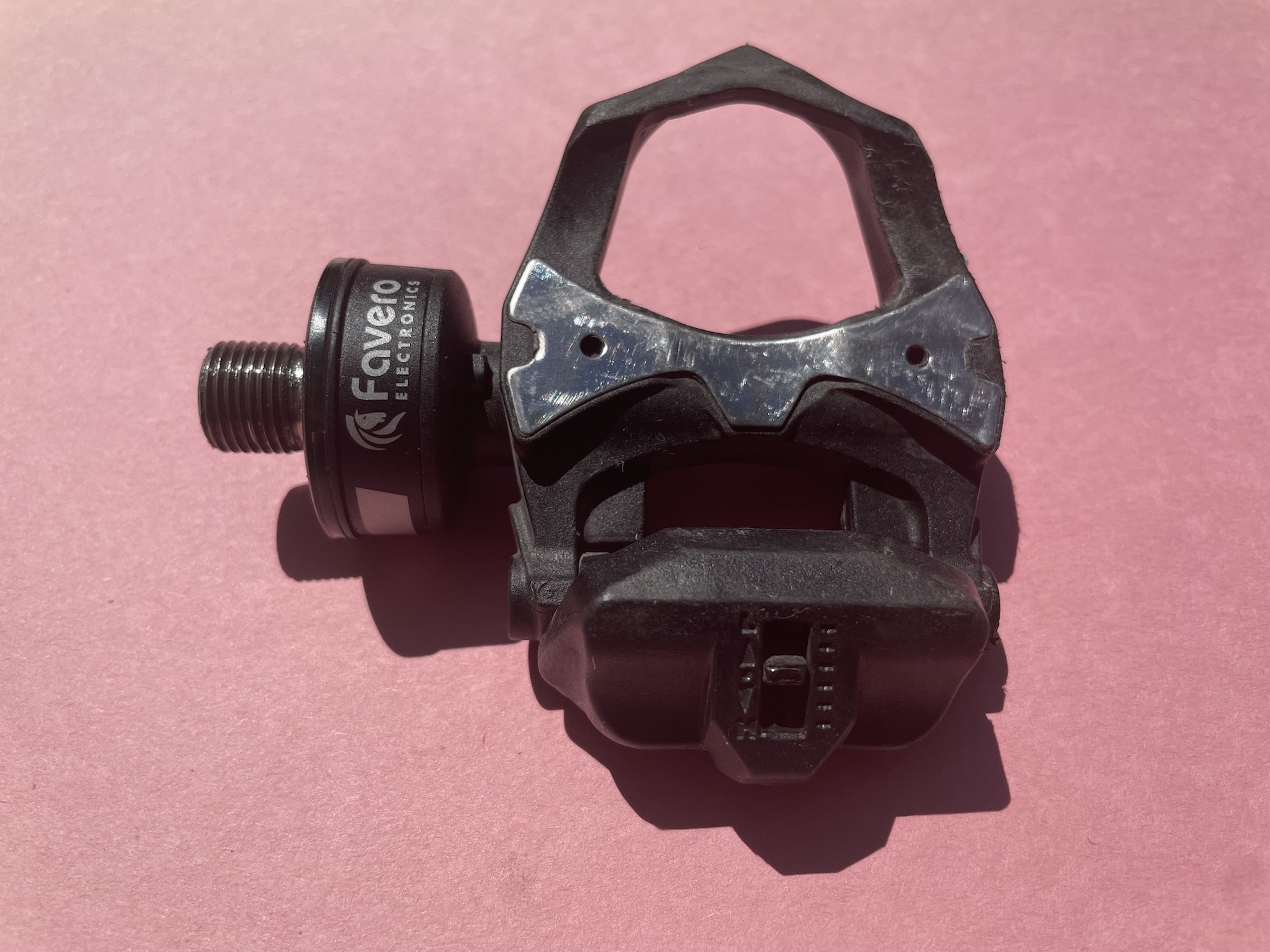 The number one (and pretty much only) issue I had with these pedals was the cleats. The Assiomas only use Look-style cleats, so I had to switch over from SPD-SLs—not the end of the world but it did mean a few rides of micro-adjustments to get the fit just right. Someone with a very specific fit looking to make the same switch should consider bringing the cleats to a professional bike fitter.

Beyond being not-SPD-SL (I’m being a bit picky here, I know), the cleats that came with the pedals were also much more slippery than I expected. The first time I unclipped I put my foot on the ground and it promptly slid across the road to the sidewalk, half-knocking me off my bike at an embarrassingly busy intersection. I switched over to branded Look Keo cleats which had a much better grip.

The most important measure of a good power meter is whether it reads power accurately, consistently and reliably over time. Testing the pedals I didn’t experience any dropouts, my power numbers didn’t erratically fluctuate and the pedals’ power readings were consistent and in line with a Tacx Neo 2T trainer when comparing power output data. Favro says the Assiomas are accurate to +/- 1 per cent. I didn’t encounter anything that made me question that figure during my testing. 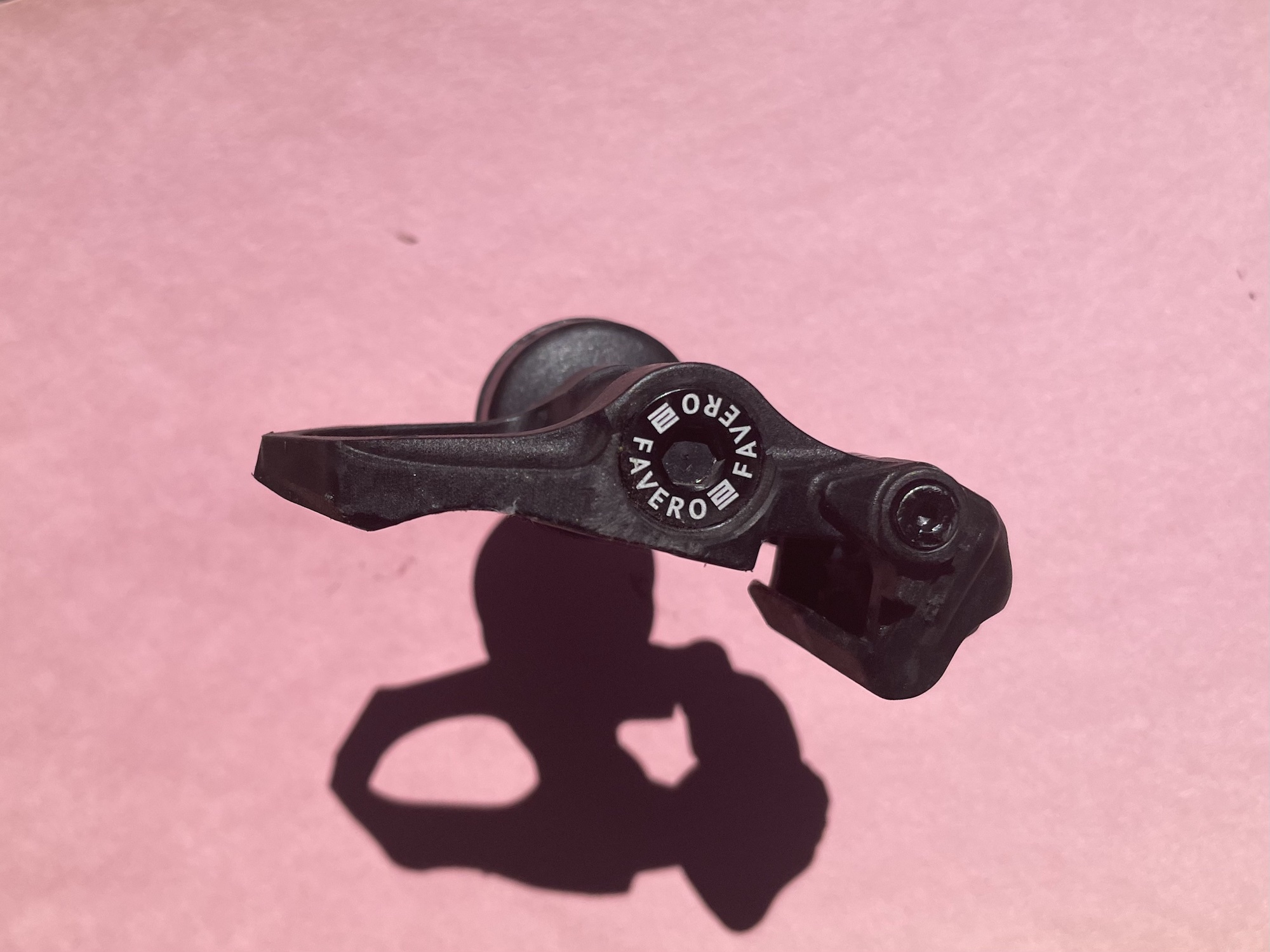 There is a natural comparison to be made between the Assioma and recently released Garmin Rally power meter pedals. The 305g Assioma Duos are about $840 while the Rally RS200s are 320g and $1,430. Garmin’s power meter pedals have a much longer battery life (up to 120 hours) but they use disposable batteries.

Both pedals have similar Cycling Dynamics features, which are fun to look at but ultimately won’t have massive training implications for most users. The Rally RS has a 12.2 mm stack height and Favero’s Assioma pedal has a claimed stack height of 10.5 mm. It sounds small, but I did feel as though I noticed the difference switching from the Assiomas to the Rallys and back again. 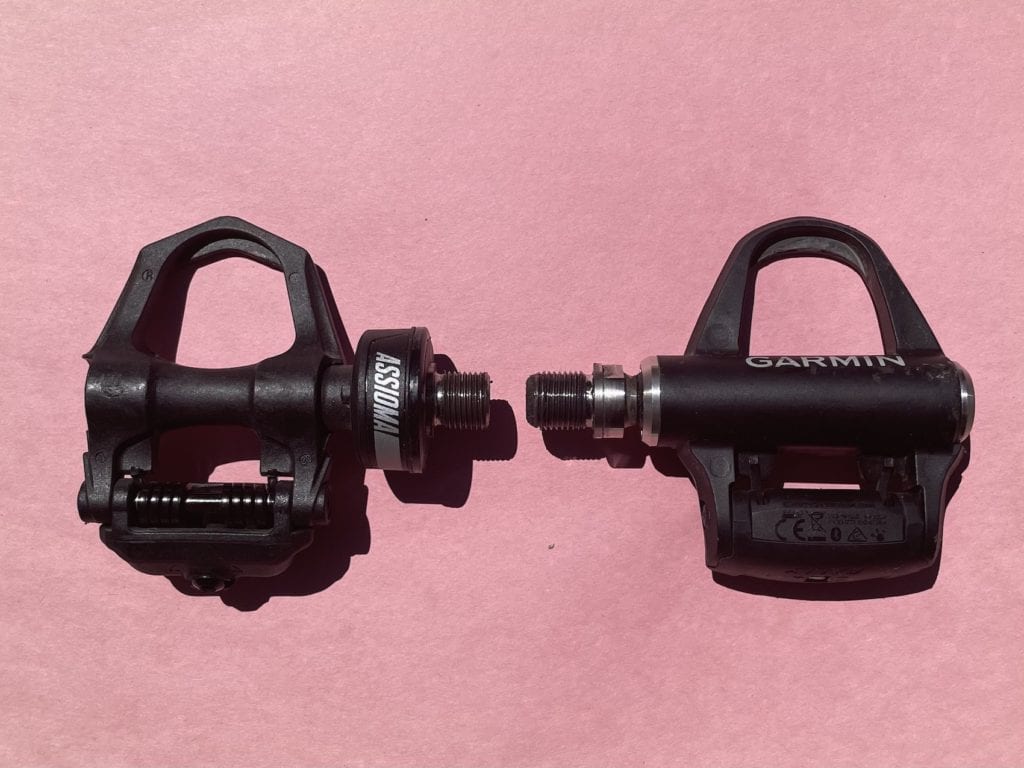 In overly simplified terms, if you’re picky about using your SPD-SL cleats, or want to switch between road and off-road power meters go with the Garmin pedals. If you don’t mind Look-style cleats and are looking to spend less, the Assiomas are probably the way to go.

The Favero Assioma Uno, which measures power only from one pedal, is significantly cheaper (about $540) than the double-sided Duo. The $300 difference in cost between the single-sided power meter and dual-sided is significant, but for some, the cost is worth it. The decision mostly comes down to how concerned you are with the accuracy of your data. Because the Uno is only reading power data from one leg, it doubles the number to give you your power output, which assumes you’re putting out the same power from both legs. 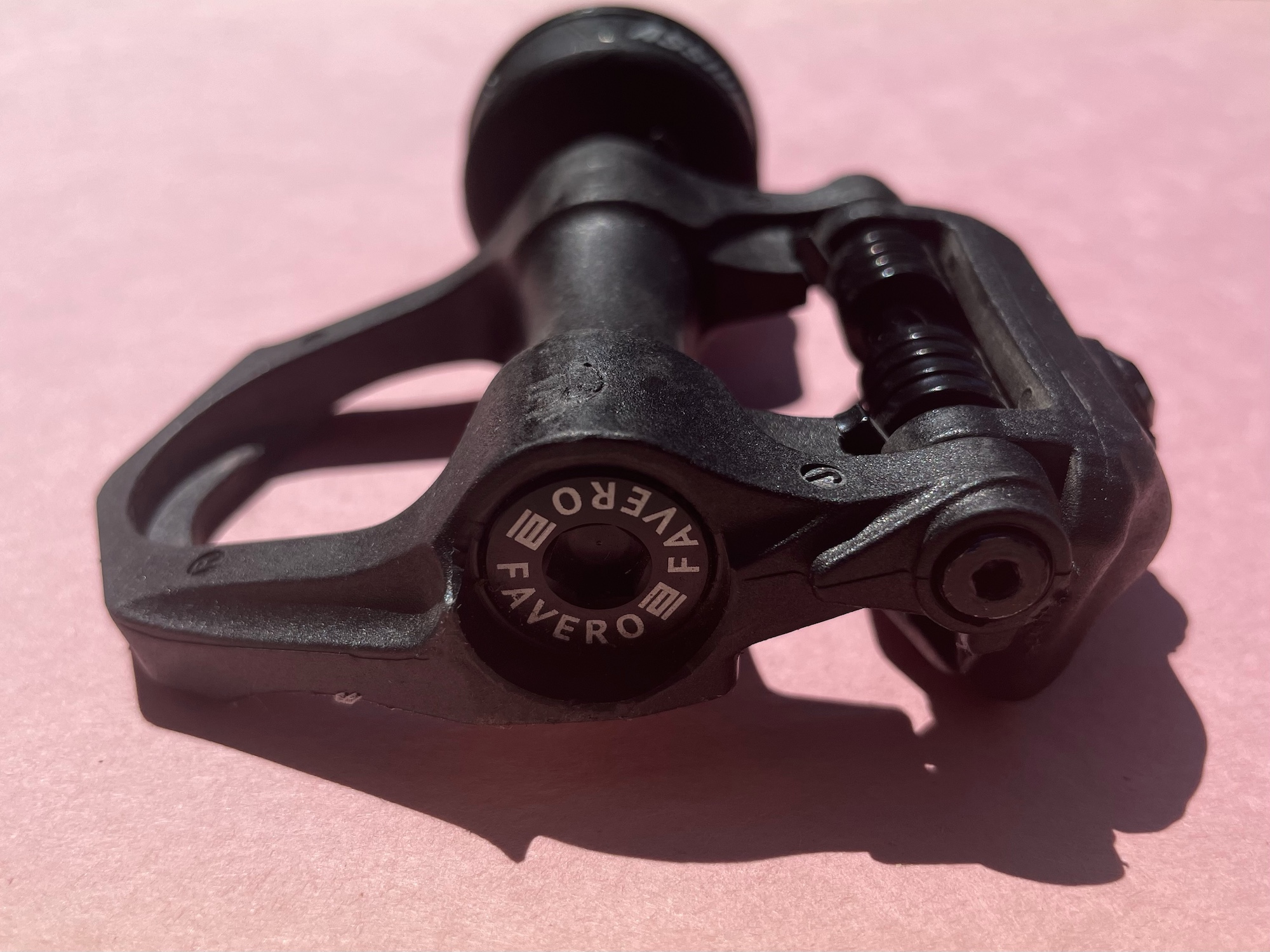 Nobody’s legs are completely even, so with a single-sided power meter you’ll always have a higher margin of error in your power numbers because the non-measured leg will either be very slightly stronger or very slightly weaker (and that margin of difference can vary even throughout a ride).

That being said, for those who are looking to simply get consistent readings that they can use to train outdoors and track progress over time, the Uno is a viable option. Favero also offers an Uno upgrade kit (about $520) for Uno owners looking to level-up to Dual-sided power. 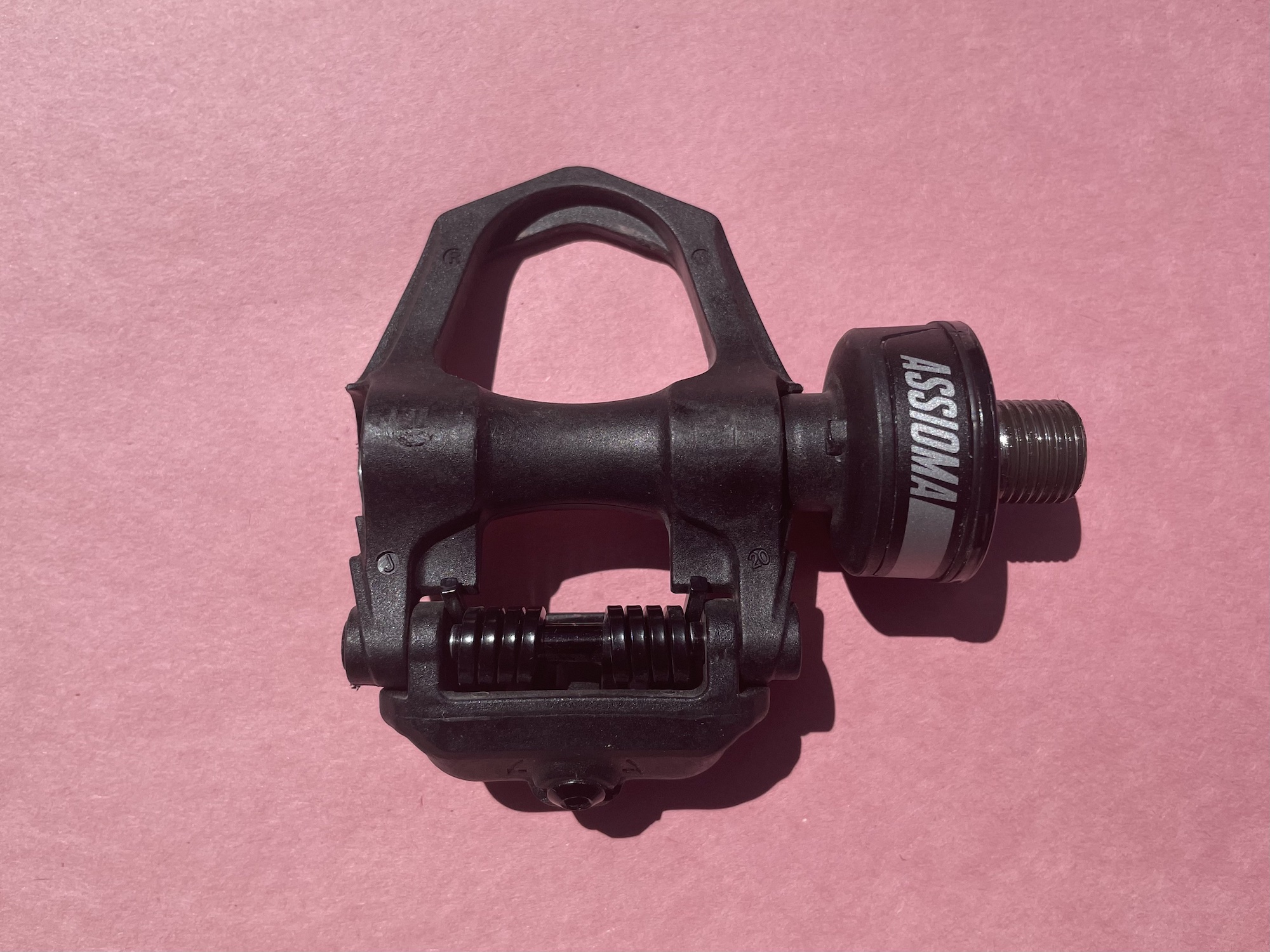 In February someone leaked a photo of what appeared to be new Assioma SPD-SL compatible spindles on the Trainer Road forum. If the rumours are true, and Favero is actually working on an SPD-SL pedal, I would feel comfortable recommending them to pretty much every cyclist I know. Picky cleat hangups aside, I would already recommend the Assioma Duos to most cyclists looking for a power meter—they’re a solid product that does exactly what it’s designed to do: measure power accurately.

The Favero Assioma Duo power meter pedals are available at Cycling.Favero.com or at your local Favero dealer