Mike Reilly has announced Ironman races for 30 years and his trademark, “You are an Ironman!” is as iconic as the race itself. The anticipation of hearing those words has inspired many athletes and they, in turn, inspire Reilly. In his first book, he shares their stories, details of his dream job, and the mutual love for the sport that brings them together.

Reilly ran his first triathlon in 1980 and his first announcer gig came the year after at a 10K run. Too injured to participate, he was unexpectedly asked to read off names at the finish line. It was totally improvised, but things went well and more announcing jobs came his way for marathons and triathlons.

Reilly enjoyed calling the new sport of triathlon because there was more complexity.

“It was exhilarating and unpredictable, and I considered it part of my job to convey all of that to spectators who were still learning about triathlon,” he writes. “The more they understood, the more exciting it would be for them to watch how a race unfolded.”

At his first Ironman event, Reilly was assisting the announcer in Hawaii when he witnessed the incredible Dick Hoyt competing in the Ironman with his quadriplegic son, Rick.

“Being down at the finish line when they came across in 1989 was one of the most profoundly moving experiences of my life,” says Reilly. The book provides answers to common questions including the one he gets asked most often: “How can you keep doing this without growing complacent?” Reilly has called over 400,000 athletes across Ironman finish lines and hundreds of thousands more in other events. He’s been inducted in the Ironman Hall of Fame, the USA Triathlon Hall of Fame and the Running USA Hall of Champions. And he says he couldn’t get complacent if he did this for another 200 years. 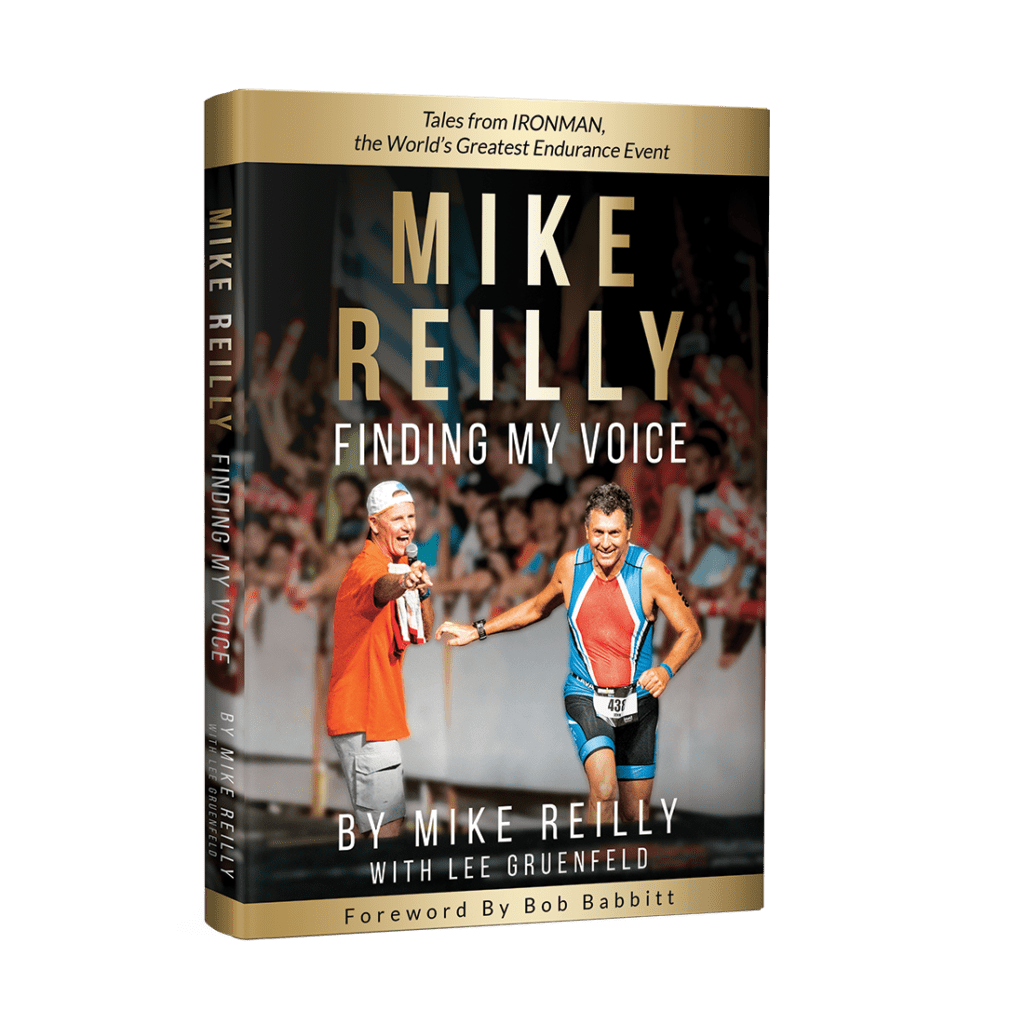 While announcing races around the world for so long, Reilly has seen many technological changes in the logistics and recalls times when things did not go according to plan. These back stories are enlightening, amusing and illustrate the full range of responsibilities that come with the job.

There’s much more to it than showing up on race day. “As with every announcer, my race starts about seven to 10 days before the actual event,” he writes. “One of the most important things I do is read every athlete’s name and their personal stories.” Not just once, but five or six times, so he remembers the details when they finish. “If there aren’t too many other athletes coming through at the same time,” he explains, “I can take a few seconds to fill the spectators in, which makes for a richer experience for everybody.”

Reilly highlights some of those athlete stories and it would be surprising if readers aren’t reaching for tissues at some point. Before they even get to the gruelling races, these amazing people conquer incredible odds, suffer terrible losses, and refuse to let illness and setbacks detour their Ironman goals. It is clear that Reilly deeply respects all of them. “Ironman isn’t just something you do; it’s something you become,” he writes.

“There is not a doubt in my mind that being an Ironman race announcer is what I was born for,” he writes. “It’s the perfect fit for my skills and temperament and, aside from being with my family, I’m never happier than when I’m on the mic shepherding athletes through their race and welcoming them home when their day is done.”

He doesn’t like to take breaks and miss declaring any racers, but sometimes it does happen. On occasion, Reilly has heard of the deep disappointment of those who were missed and has found ways to make it up to them.

“Letters, email and phone calls with athletes all over the world have driven home for me that Ironman is not just a race,” he writes, “And announcing it is not just a job.”

You can purchase the book at https://mikereilly.net/findingmyvoice/