We all know that there are many triathlon bikes that aren’t legal for UCI racing. Now we’re starting to see the same thing happen for running shoes. Norway’s Gustav Iden was racing in a shoe specially designed for him by his new sponsor On. Iden shattered the Ironman World Championship course record (7:40:26) and also set a new marathon record (2:36:15) at his debut appearance on the Big Island. (In just his second full-distance race, no less.)

“In the last 10 km I felt like I had an advantage going back towards town,” he told On for a story the company posted on its website. “Not only with the shoes [Gustav wore a racing shoe evolved from the Cloudboom Echo], but that’s what I was envisioning the whole time, going the last bit back to town. The shoes were a motivation for me because when you really put the power on, you get the sense of speed straight away.”

Tim Hemming first broke this story for Triathlete, pointing out that the prototype shoes Iden wore in Kona appeared to have a midsole thicker than the 40-mm limit World Athletics applies. On has not made the details of the Iden’s shoe available, but the shoes did appear to have a deeper midsole than the World Athletics limits.

We reported on the new World Athletics rules when they were announced in 2020.

Further, with immediate effect there will be an indefinite moratorium on any shoe (whether with or without spikes) that does not meet the following requirements:

When the rules were first announced, World Triathlon announced that its technical committee was looking into following the World Athletics guidelines, but has since been advised by World Athletics to hold off on the implementation of those rules.

“The implementation of the rule that World Athletics has in place, and to which our rules refer to, is still under review by their working group,” World Triathlon told Hemming when he enquired about the rules. They supplied the same quote to us when we enquired. “Since the implementation of this rule (the approval process, especially) is still under review and not defined to be implemented in other sports, World Athletics has recommended us not to adopt the rule until the process has been clearly defined. Therefore, currently we don’t check or approve shoes.”

Ironman typically follows many World Triathlon rules – On made sure to check with the organization that Iden’s shoes would be legal for the event. 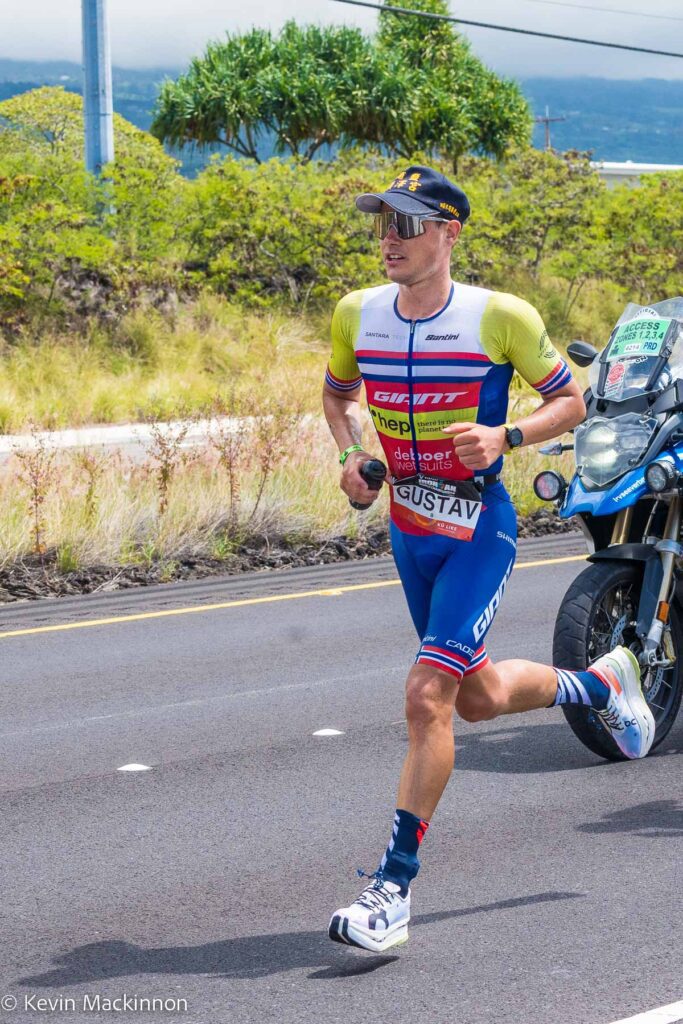 Iden told On that his race plan was, in part, based on the performance of his new shoes:

“When I ran with the shoe, I noticed that it was extremely fast in the downhill sections,” he said. “So when I saw there was most likely going to be a tailwind and a slight downhill from the Energy Lab and back, the plan was built around that.”

On wasn’t the only company that took advantage of the fact that the World Athletics rules aren’t utilized for triathlon events. The international running body requires that shoes be available for four months before the race:

From 30 April 2020, any shoe must have been available for purchase by any athlete on the open retail market (online or in store) for a period of four months before it can be used in competition.

If a shoe is not openly available to all then it will be deemed a prototype and use of it in competition will not be permitted. Subject to compliance with the rules, any shoe that is available to all, but is customised for aesthetic reasons, or for medical reasons to suit the characteristics of a particular athlete’s foot, will be allowed.

A number of Hoka athletes ran in a prototype shoe – the Rocket X2 – which won’t be available until March, 2023.