Is the new Wahoo Kickr Rollr trainer a smart trainer? Kinda. Is the Rollr, in fact, a set of rollers? Sorta. Is Wahoo’s new trainer compelling? Yes. Definitely.

What is the Wahoo Kickr Rollr?

The Wahoo Kickr Rollr is a half-roller trainer, somewhat like the Feedback Sports Omnium. The Rollr has some “brains” to it making it a semi-smart trainer. Those brains reside near the two back rollers. There’s a 4.8-kg flywheel and magnetic resistance unit. The maximum resistance is 1,500 W, which may not seem that impressive since both the Wahoo Kickr and the Tacx Neo 2T do 2,200 W. But, if you need more than 1,500 W, well, nice work, eh. Them’s some WorldTour problems ya got there.

The Rollr can broadcast ANT+ and Bluetooth signals. On its own, the data it can pass to your head unit or gizmo running Zwift includes speed and cadence, but not power. Instead, it’s BYOP: bring your own power. The unit is designed to get paired with your on-bike power meter. Any power meter will do, whether it’s pedal-, crank- or hub-based. The launch of the Rollr coincides with the official release of Wahoo’s new Powrlink Zero power pedals. There’s even a bundle with a single-sided Powrlink Zero and Rollr. (See below for Canadian pricing information.)

Unlike the Omnium, which requires you to remove your bike’s front wheel to mount the fork, the Rollr lets you keep your front wheel on. It gets clamped in the triangular stand at the front. You can pretty much take your bike in from an outdoor ride and put it on the Rollr. You would, of course, first make sure there’s no crud clinging to your tires.

Setting up the Wahoo Kickr Rollr

I found setup really easy, even easier than a few fluid trainers I’ve tangled with. The roller unit with the flywheel has a bar that extends forward. You mate this bar with the one that extends back from the front triangular stand. Then, you place your bike’s front wheel in the stand and adjust the roller unit so the bike’s rear wheel sits in place properly. You connect the two bars together via a lever and two bolts. Finally, close the jaws at the top of the front stand around your front tire and wheel. The Rollr can accommodate 700c tires as wide as 53 mm. On my bike, I currently have a 28c Continental Grand Prix 5000 tire on a Zipp 303. The jaws seem to be pressing more on the tire than the rim. It’s a solid connection. I wouldn’t be too fazed if the jaws pressed more on the rim, however, as they have a rubber coating on them.

According to Wahoo, the Rollr weighs 22.6 kg, almost 2.5 kg lighter than the regular Kickr. The Rollr, however, is bulkier and doesn’t store away as easily. Space is at a premium for me and my family, so I’m not totally sure where I would stash the Rollr at the end of trainer season. The standard Kickr is definitely easier to put away.

Still, once the Rollr is set up, its footprint isn’t that much greater than that of a direct-drive unit. Since the rear wheel stays on when you use the Rollr, you have to factor in about 10 to 15 cm more out the back. The base of the triangular front stand is 80 cm, so you need about 20 cm of space on either side of your handlebars. In short, I got the Rollr into the same tight spot I’ve always used.

There’s something really nice about having a free back end—you know what I mean. As I pedalled, the back wheel could drift a little back and forth within the rollers. It doesn’t quite feel like you are on the road, but it’s much better than the locked-in feeling of a direct-drive trainer. I’m still working on my sprints on the Rollr. You can definitely be more sloppy on a direct-drive as its mass will hold you as you go fully cross-eyed with a big effort. On the Rollr, you have to be smooth and your core has to be engaged as you chase after big watts.

Since the back wheel can drift a bit and you can lever the frame from the saddle, I found it a bit disconcerting at first to see some flexing at the front. I’m not worried though. The unit is designed to work for a 250-lb. rider putting out power in a hard sprint.

The resistance unit does emit a whine when it’s working. It’s noticeable, but not too loud.

Wahoo recommends using its app to connect your power meter with the Rollr. If you don’t, the Rollr will simply use the nearest power meter. For Zwift, Systm or another training app, Wahoo also recommends that you not only set the Rollr as the controllable trainer, but as the power and cadence sources as well. At first, I didn’t do this.

For my first ride on Zwift, my Quarq power meter took care of power and cadence directly, while the Rollr managed resistance on the climbs. Things would get a little weird at about grades of 8 per cent. I’d settle into a low cadence grid, which would continue for a while, and then the resistance would seem to ease up and I’d find myself spinning more even though the grade hadn’t changed. When I ran things the way Wahoo recommends, this behaviour didn’t present itself until the grade got to about 11 per cent. I asked Wahoo about what I was experiencing. The response I got was simply that it was Zwift that was controlling the resistance. 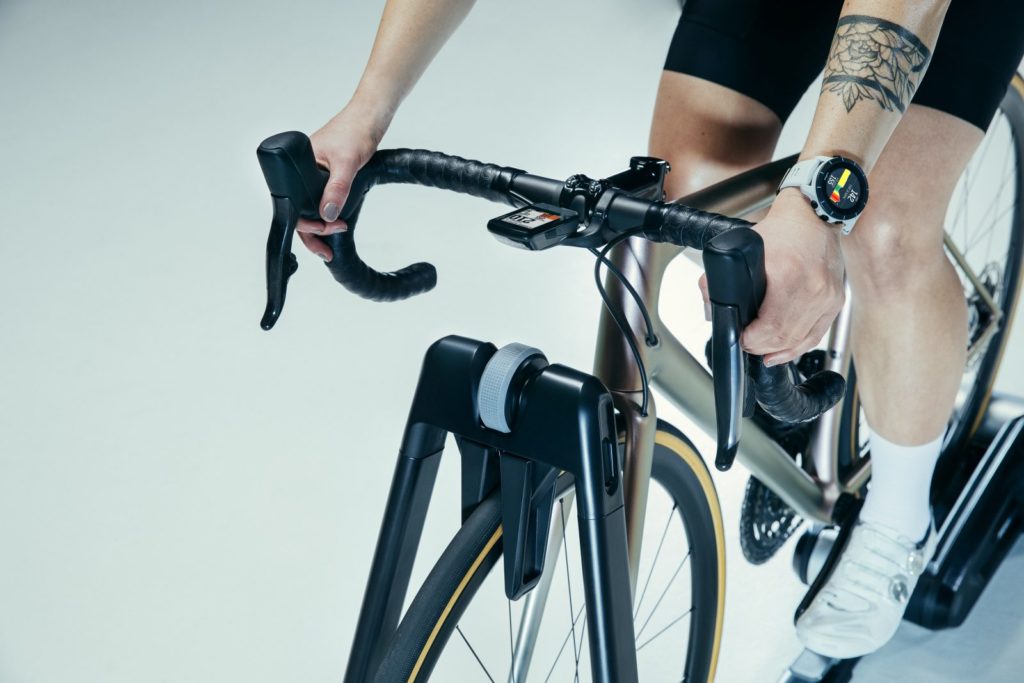 The next steps in testing the Wahoo Kickr Rollr

What I really like about the Rollr, which is also a feature of regular rollers, is that I can just plop my bike on it and start pedalling. I don’t have to change a thing. (If I had a tire with a significant tread pattern, I would switch to smoother one.) I don’t have to remove the rear wheel and transfer its cassette to the trainer as I would with a direct-drive. With a wheel-on fluid or magnetic-resistance trainer, I’d have to do a skewer swap and put on a trainer tire so my road tire wouldn’t get chewed.

Wahoo says the rollers on the Rollr would only contribute a little bit to the wear of the rear tire. The rollers are smooth, unlike roads. Also, unlike a wheel-on trainer, there’s no added force applied to the tread.

As March is just around the corner, I’m hoping it comes in not like a lion but a lamb so I can start getting outside soon. Once enough snow and slush have disappeared from the streets, I’ll take out a nice bike. I’m hoping to pop my rig off the Rollr and head out when the conditions are right. But if the weather turns, well, I’ll return to the trainer, easily.

Canadian pricing of the Wahoo Kickr Rollr and related products 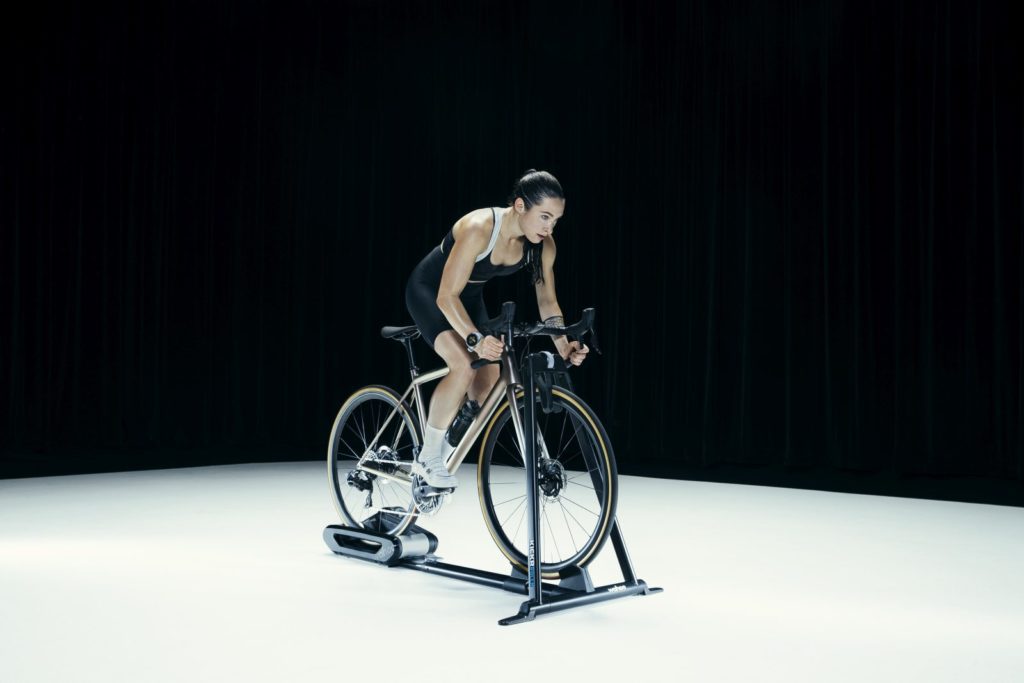