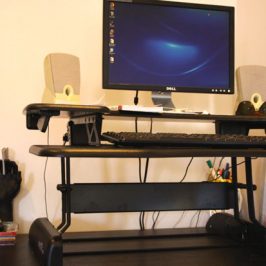 I’ve been using a standing desk for about two months. There are a few different reactions friends have when they learn I have one in my office, though one response stands out as the most popular.

“How do you stand all day? Don’t you get tired?” I would love to answer that I’m simply better at standing than most, but when deciding to try a standing desk I was happy to learn some of the options available aren’t designed to be used all day. So, I don’t stand up all day. I still sit more than half of the time I spend at my desk.

I’ve been using the Varidesk, one of a few options that swap between standing to sitting position. The desk folds down onto itself and rests atop your regular desk. The whole contraption is pretty heavy and, when folded up, sits sturdily on the existing desk and could be mistaken for simply a part of a regular office desk.

A quick look around the company’s website shows the desks come in varying sizes and terrace options. The box is long gone and I can’t seem to actually find a name on the desk, but I think the version I’m standing at is the 30-inch Pro Plus, a mid-range option with two platforms: one for the monitor and one slightly lower for your keyboard and mouse. It’s plenty big enough for a single monitor and a set of desk speakers, though you’d be hard-pressed to fit two monitors on this desk. There are options available up to 48 inches wide.

But when Varidesk spreads it’s wings, the entire platform stands up, speakers, monitor, keyboard and coffee mug. When I first stood the desk up, I was unnerved over if it would tip. The platform, when outstretched, isn’t particularly sturdy and I wouldn’t trust it to hold heavy objects, though I’ve grown confident it will hold up to most desk tasks. I can write and type just fine. I lean lightly on it and there’s a distinctive (oddly tactile) bounce to my monitor while typing quickly. I feel it’s sturdy enough that in the event of a minor earthquake – say below 5.0 on the Richter scale (which I am basing my assumptions on almost no understanding of) – it would hold up.

I’ve, without thinking about it, begun to follow a loose schedule for my standing and sitting. Generally, I’ll sit at the desk for most the morning, until about 11 a.m. when I stand up for an hour before lunch. Eating at a standing desk simply feels wrong, as though the desk doesn’t want me there, so the days I eat at my desk I do so sitting down. I stand up again after lunch, often for the better part of the afternoon. Sometimes I will take a break mid-afternoon, or close out the day sitting.

At first I stood as much as I could, but found myself tired after work and wishing I wore shoes with more cushioning (contrary to what you may suspect, we don’t onlywear running shoes here at CR). I think I’ve found a nice compromise, standing for around one-third of the day. I would consider myself a convert: I don’t think I would want to go back to not standing at least for awhile at work each day.

These are completely anecdotal observations, but my legs and back feel better, I don’t get as dreary later in the afternoon and sometimes I find simply standing up for a bit helps me refocus. Getting on my feet during the day combats that terrible weak-kneed feeling of standing up from a chair after being in it for too long (of course, that’s literally what I’m doing).

But it’s not all sunshine in the world of standing desks. If you want a desk which alters from standing to sitting, you still need a chair, though while you’re standing suddenly there’s an extra chair. Whenever I stand up I need to roll my chair out of the way to some unused part of the office, out of the way. This is akin to trying to discreetly sneak out of a movie: it’s impossible to not feel as though you aren’t, at least slightly, disturbing someone.

As a whole, the Varidesk has been a great. Though I can’t speak definitively to other options, I imagine there are other great standing-sitting hybrid desks available as well. I would, and do, suggest giving it a try.