The day has come. If you head to the Canyon website right now you’ll see the message: “We’re here in Canada!” That means Canadian customers can now get a Canyon shipped right to their door – welcome news for triathletes who have been keen to check out the that have been ripping up the international race scene for the last few years.

The last five men’s Ironman World Championship titles have been won on the Canyon Speedmax (the bike ridden by three-time Kona champ Jan Frodeno and two-time winner Patrick Lange), and even Canada’s Lionel Sanders started riding the bike late in 2019.

Canyon is a German company that began founder Roman Arnold’s garage. He renamed the company in 2002, and ever since they’ve sold their bikes online.

The original Speedmax hit the market in 2015, just in time for Frodeno to use it to take his first Kona title. Last November Canyon announced the latest version of the Speedmax line up that, like so many triathlon bikes these days, now comes with disc brakes. What’s possibly more impressive about the new Speedmax lineup, though, is exactly what’s made the bike so popular over in Europe – you get a lot of bike for the money. Even the “lower end” models offer aerodynamic numbers similar to the original Speedmax models – yes, the ones that Frodeno and Lange used for those Kona wins.

To give us a good feel for what Canadian triathletes can expect later this year, Canyon sent us a couple of bikes to review. After all the years of shipping online bikes, it wasn’t a surprise that putting together the bikes was a breeze, with our biggest complication coming from the fact that our test rider was determined that the handlebars be “slammed” as low as possible, necessitating a bit of adjustment on the front end. 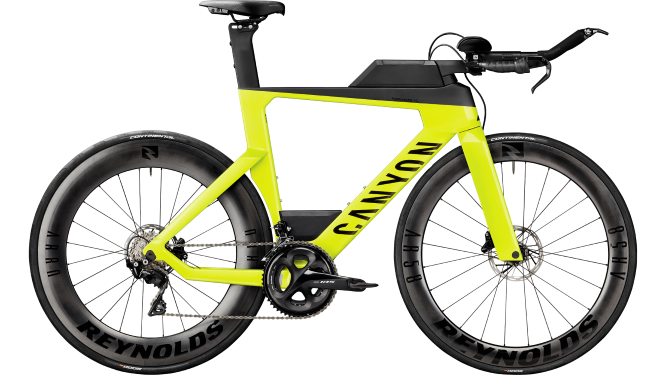 We were hooked as soon as we saw the “flash yellow” and black paint job on the “lowest” level of the Speedmax line up, and only got more impressed the more time we spent on the it. When it comes to triathlon bikes, aerodynamics is everything. Not just for the bike, but more importantly, for your position on the bike and your ability to carry the fuel, hydration and tools you need both in training and racing. The new Speedmax CF 7 Disc clicks all of those boxes.

The aero carbon frame tests, according to Canyon, within a few watts of the old CF SLX that won all those Kona titles, and features huge eight mm chainstays that enhance aerodynamics as well. Cables are routed internally for a clean look, and you get an aero-optimized, deep-profile fork, too. The bike is also designed with a frame integrated toolkit on the top tube that’s easy to access. At 9.35 kg the CF 7 Disc is only 210 g heavier than the flagship CFR Disc Di2 (see below).

In terms of position, there’s lots of adjustability to ensure you can dial in both a comfortable and aero fit – the aluminum Canyon stem and flat, carbon fibre basebar are matched with Profile Design J-Bend extensions.

All that combines for an impressively-performing bike that would serve any level of triathlete well in any race. The bike is surprisingly responsive, with a little bit of a “road” feel in terms of cornering and acceleration. That doesn’t seem to affect the comfort level when it’s time to put the hammer down on the aero bars, though – in fact, the bike is most comfortable ridden in that position. The Canyon engineers have done a great job with the geometry of the frame to ensure that you’ll be happy to spend most of your time exactly where you should on the Speedmax – on your aero bars.

Riding a tri bike in Canada in December and January doesn’t exactly lend itself to race-like tests, but the rides we were able to get on the CF 7 Disc were more than enough to convince us that this will likely be a popular choice for Canadian triathletes once the bike becomes available. It offers a solid mix of components, frame and wheels, making it a race-ready machine for those looking for an aero tri-bike. 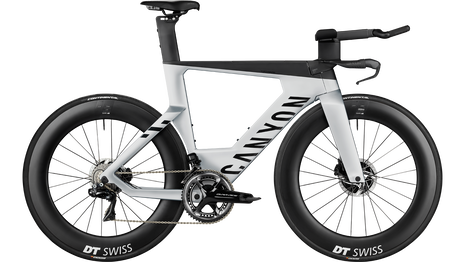 We did this series of reviews the right way. After spending some time on the CF 7 Disc, we were finally able to pry the CFR Disc Di2 from our photo editor, who shot the bike for this issue’s cover, and spend some time on the flagship edition of the Speedmax line up. Had we tried to do the reviews in reverse, it’s hard to say if the CF 7 would ever have got a ride.

Don’t get us wrong – the CF 7 is a fantastic bike. It’s just that the CFR Disc Di2 maximises every aspect of the Speedmax line up.

It starts with the carbon used in the frame which features Toray M40X carbon fibres. While the bike doesn’t come in a whole lot lighter (9.14 kg), it feels like a much lighter bike when you start to climb or power in and out of corners. The added lateral stiffness makes the bike truly responsive and even nicer for climbs, but doesn’t affect the comfort of the ride. Even during our winter efforts on the bike we were impressed by just how smooth the ride is, especially on the aero bars. Aerodynamics are enhanced thanks to the deep-profile fork that even covers the brake caliper. Needless to say cable routing is all internal.

When it comes to adjustability for the cockpit, the CFR Disc features a monospacer system that offers a whopping 110 mm of height adjustability. (That mono-extension is attached to a really sharp-looking basebar that includes ergonomically optimised grips.)  Moving the bars in and out to find the right extension is a breeze and you get an impressive 132 mm of length adjustment. It’s also easy to adjust the width of the pads. The set up does lend itself to the narrow-elbow position that you see riders like Jan Frodeno use to set world-bests and Kona records. If you favour a slightly wider elbow position you’ll have to work a bit to dial that in.

Components feature Shimano’s top of the line Dura-Ace Di2 groupset, which includes a dual-side power meter. The wheelset is DT Swiss’s tubeless-ready ARC 1100 Dicut, which have proven themselves to be amongst the fastest used in Kona over the years.

It’s not hard to see how the world’s top athletes can use a bike like this to power through the bike leg of any non-drafting event. All the energy you put into pushing down on the pedals seems to drive your forward. None of which helps, though, if you can’t maintain an aero position. In addition to the extremely adjustable front end, the CFR Disc features an internal hydration system with a straw that integrates into the wireless cockpit and clips with a magnet to the aero extension. (Possibly our only beef with the CFR is that the magnet could definitely be stronger.) There’s also an internal bento box on the top tube that’s easy to access that provides excellent storage for bars and gels, and an aero tool kit just about the bottom bracket.

The end result is a bike that pulls out all the stops in the search for the ultimate bike split.