There’s nothing quite like finding just the right shoe. That’s not always an easy task – but fear not, we’ve got you covered. Here’s a look at some of the speedy options you might want to check out for this season’s training and racing: 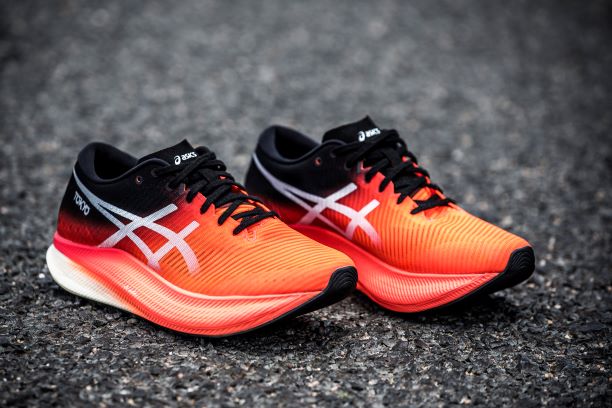 In 2021, Asics introduced two new products to the market of carbon-plated shoes: the Metaspeed Sky and the Metaspeed Edge. (The company has released updates to both these shoes – the Metaspeed Sky+ and Edge+, but they aren’t available in Canada quite yet.) Even though there is an updated version of the shoe, if you can track down the 2021 model, you’ll find these to be extremely fast shoes. The team at Asics determined that most runners can be divided into two categories: stride-style (runners who lengthen their stride to get faster) or cadence-style (runners who increase their cadence to pick up speed). The Metaspeed shoes are designed for these two types of runners, with the Sky covering stride and the Edge taking care of cadence.

While the two shoes have different specs, either will change your racing game dramatically. They’re designed to carry you to PBs, and that’s exactly what they’ll do, as they are incredibly quick while still providing a sense of stability, which is something that some carbon-plated shoes lack. The price tag may come as a bit of a shock, as the Metaspeed Sky and Edge land on the more expensive end of the spectrum, but if you’re in the market for a fast and reliable race-day shoe, then these are well worth the investment. Don’t believe us now? You will after the Metaspeed help to propel you to the finish line of your next race (and all the ones after that). 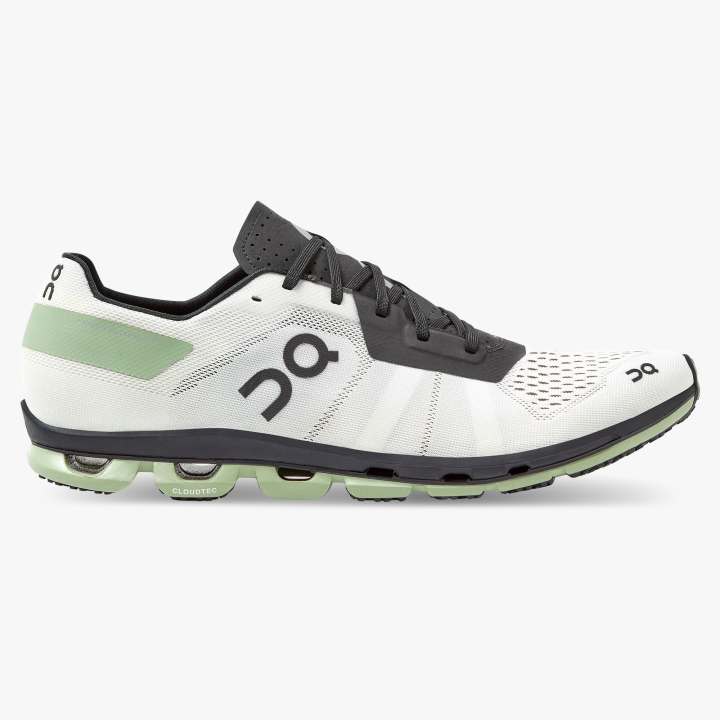 The Swiss running brand On has only been around for a little over a decade, but it has quickly risen to become one of the best shoe companies on the market. If you’ve yet to give On a chance, now is the time, with the Cloudflash. According to the team at On, the Cloudflash is the company’s fastest shoe to date. This lightweight shoe has been worked and reworked by the engineering team at On over the past few years, and with the help of the company’s lineup of elite athletes, they have developed an incredibly quick and extremely comfortable ride.

Many companies use words like “plush” or “comfy” way too freely for products that don’t back these descriptions up. When it comes to On — a company that has the word “cloud” in the name of each of its running shoes — claims of comfort are 100 per cent valid. With some shoes, you may have to sacrifice comfort for speed, but that’s certainly not the case with the Cloudflash. We’ll say it again: if you haven’t used an On running shoe yet, it’s time to change that. The Cloudflash will help carry you to new speeds, all while maintaining a plush and comfy (and no, we’re not just saying that) ride. The New Balance FuelCell RC Elite v2 is yet another addition to the company’s lineup of carbon-plated shoes. These shoes are lightweight and fast, designed to fire you through the racecourse and across the finish line. The Elite v2, like its predecessors, features New Balance’s FuelCell foam, which contributes to a comfortable ride while also propelling you forward with every step. On the bottom of the shoe, you’ll find a reliable and delightfully loud outsole (outsole colour options include hot pink and orange, along with a more muted blue and black combo if you’d rather something less flashy).

This outsole serves two purposes: durability and traction. You don’t want a shoe that will wear out too quickly, and that’s not something you’ll need to worry about with the Elite v2. As for traction, the outsole will help to keep you on your feet no matter the terrain. With these features — along with the shoe’s carbon plate, lightweight mesh upper and speedy design (the Elite v2 comes in pink, pale blue and purple) — you’ll find yourself crushing any and every race you enter. 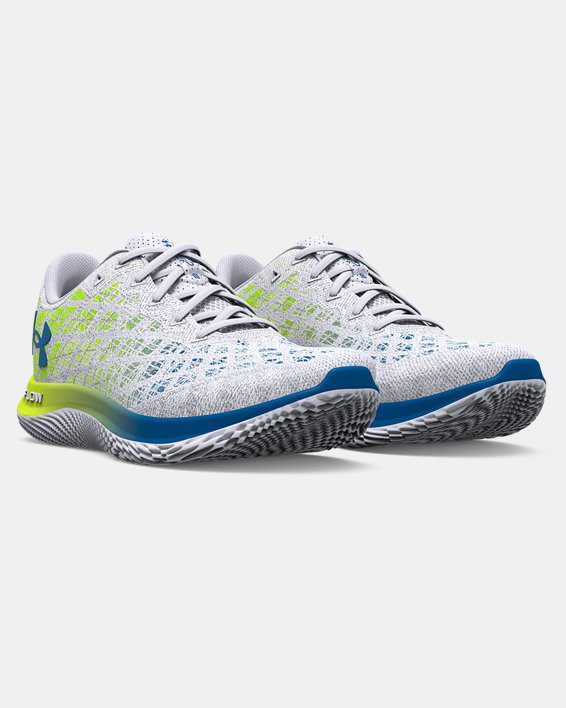 In the past few years, Under Armour has gone from a company that makes running shoes to a company that produces shoes for runners — and yes, there is a difference. Plenty of companies sell products titled “running shoes,” but that doesn’t necessarily mean they’re good for running. It’s the companies that design shoes specifically for runners that make a mark in the sport, and that’s what Under Armour has been doing in recent years, like with the UA Flow Velociti Wind. The Velociti Wind is a lightweight, comfy and sleek running shoe that will help any runner reach new speeds. Equipped with Under Armour’s Flow midsole cushioning, the shoe is a dream to run in, and your feet will be as comfortable after 10 kilometres as they were when you started your run.

Another great feature included in the Velociti Wind is Under Armour’s Bluetooth technology that connects the shoe to the UA MapMyRun app (which can be uploaded to your phone and some watches). This shoe-to-app pairing allows for real-time coaching from MapMyRun, which will track and analyze your movements and notify you if you need to make any adjustments at any point during the run. The Velociti Wind is more than just a shoe — it’s tech you wear, it’s a coach on your feet and, if you get a pair for yourself, it’ll likely be the reason for your next PB. 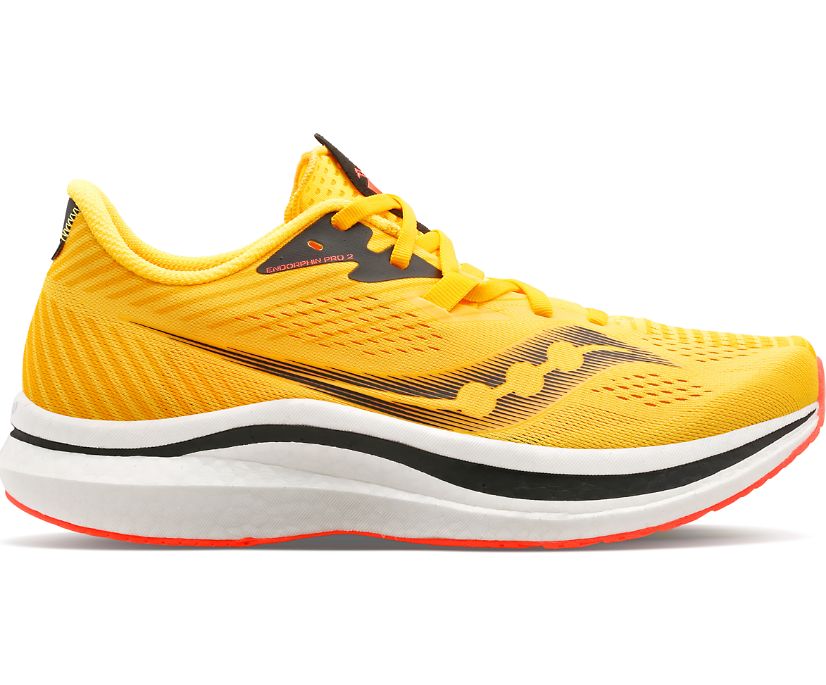 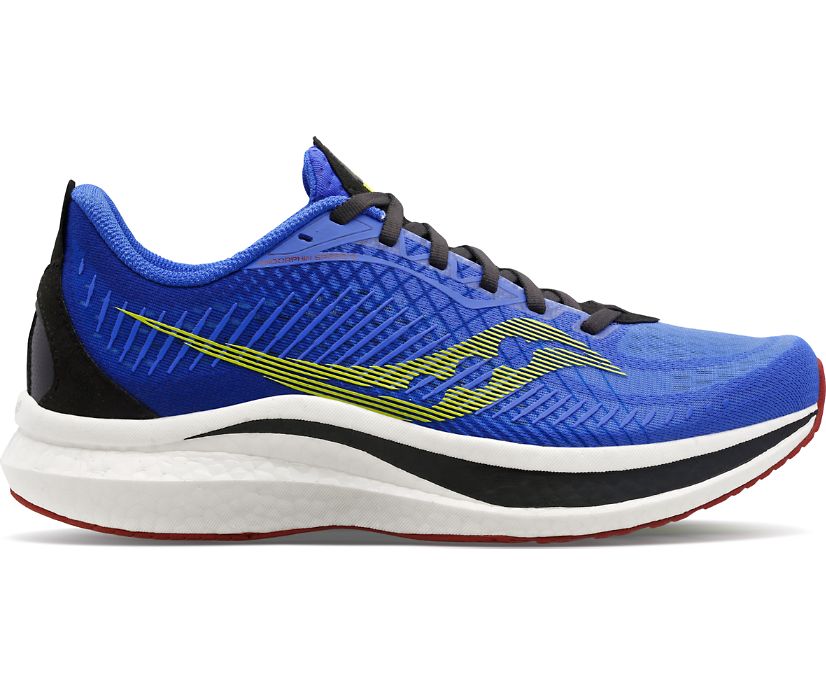 In 2020, Saucony introduced a new lineup of shoes to its collection with the Endorphin series. Last year, the company went for an encore, releasing second iterations to each of the shoes in the series, one of which is the Endorphin Speed 2. The Speed 2 is an excellent shoe for any occasion that involves, well, speed (as its name suggests), whether that’s a tempo run, a track session or a race. It features Saucony’s lightweight PWRRUN PB cushioning, in which a full-length nylon plate is embedded. Although not carbon (which is more expensive), this plate delivers tremendous bounce with every step, which is why the Speed 2 is such a quick shoe.

If price isn’t too much of a concern, the Endorphin Pro 2 is a great option to consider. The Pro 2 is the slightly faster sibling of the Speed 2. Why? It’s mainly due to the plates in the two shoes. While the Speed 2 features a nylon plate, the Pro 2 is carbon-plated, hence the bigger price tag and faster results. However, no matter which of the two Endorphin shoes you decide to go with, you’ll see a boost in your times, both in training and on race day. 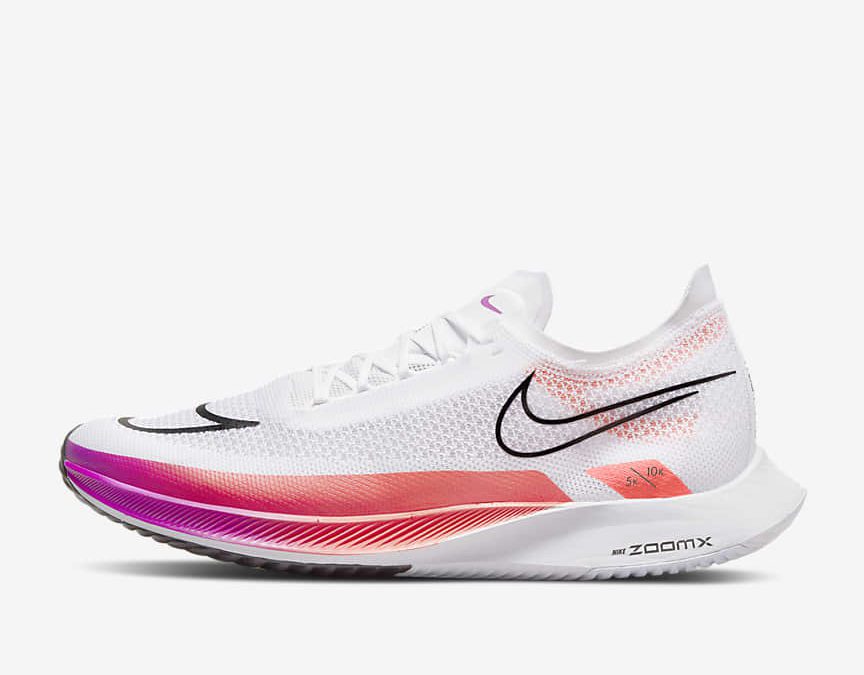 Nike recently released a new racing shoe called the ZoomX Streakfly. This is Nike’s lightest racing shoe yet, and it’s the company’s response to its own lineup of other footwear designed for the marathon, like the Vaporfly and Alphafly. These two shoes will of course help any runner cruise to quick results in races shorter than 42.2K, but the team at Nike decided it was time to design a ZoomX shoe for runners who prefer shorter events like the mile, 5K and 10K.

As the shoe’s name suggests, it features Nike’s ZoomX foam, which is incredibly lightweight while still being able to produce great energy return with every stride. Unlike the company’s marathon-specific shoes, the Streakfly does not have a carbon plate. Instead, it is equipped with a Pebax plate, which Nike engineers determined was a better fit for a shoe designed for shorter, faster racing. The Vaporfly and Alphafly are responsible for many world records and PBs in the marathon and half (not to mention full- and half-distance triathlons), so it shouldn’t come as a surprise when athletes begin smashing records with the Streakfly. You might not beat a world record with this shoe, but you can still use it to chase down your own best times. 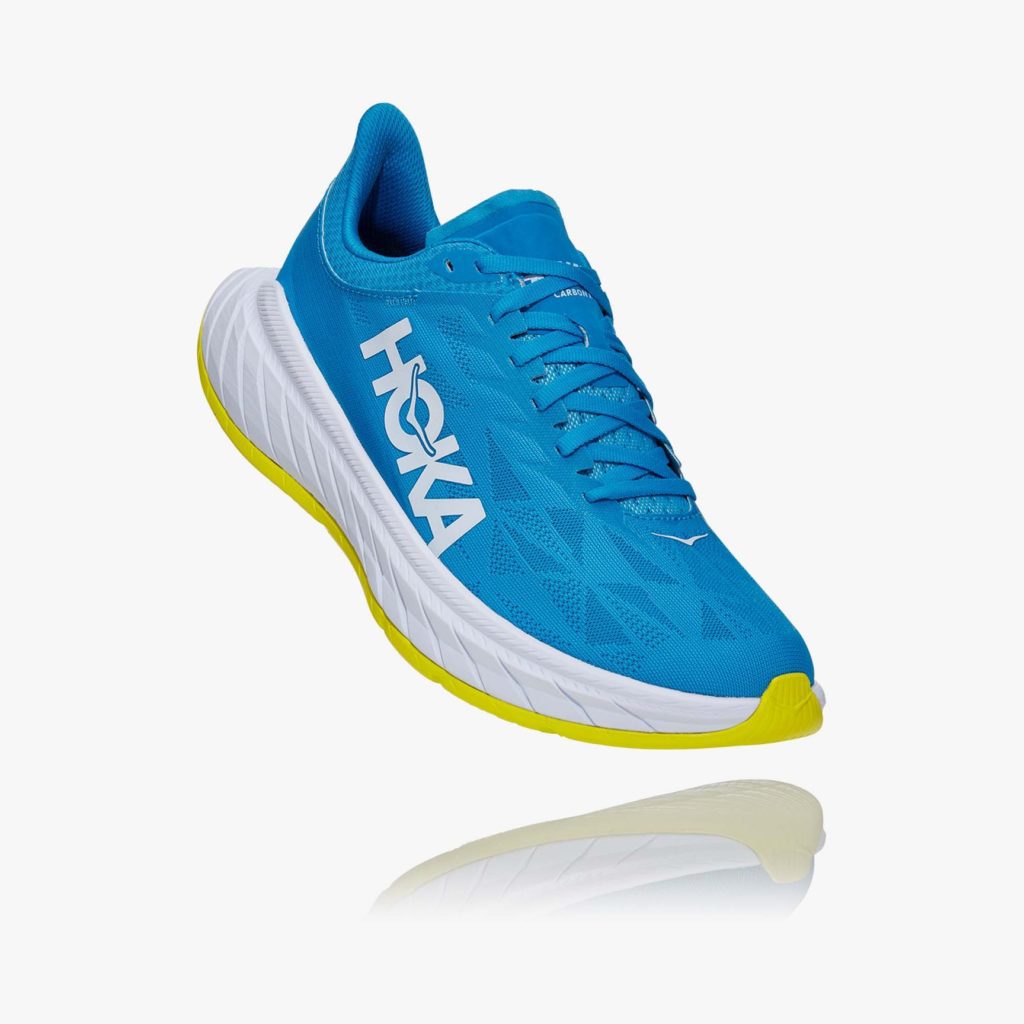 Last year, Hoka introduced the Carbon X 2 to the world in exciting fashion at a 100 km race in Arizona. This event was aptly titled Project Carbon X 2, and it featured Hoka’s top ultrarunners as they all chased the men’s and women’s 100 km world records. While no one managed to break these records on the day, Jim Walmsley of the U.S. came agonizingly close, clocking an astonishing 6:09:26 result and finishing just 12 seconds off the world record. His time worked out to an average pace of 3:41 per kilometre, and while a lot of that is due to his incredible abilities as a runner, the Hoka carbon X 2 is also partially responsible for his near-record run.

The Carbon X 2 is designed for speed, and it can deliver that over all distances, whether you’re running a 100 km race like Walmsley did in Arizona, a 10K or anything else. The shoe’s carbon plate and ProFly midsole (Hoka’s lightweight cushioning) make the shoe incredibly responsive, and paired together, they will power you forward from start to finish. You might not reach Walmsley levels of speed, but the Carbon X 2 will certainly help you smash your own records and barriers, no matter the distance you’re running. 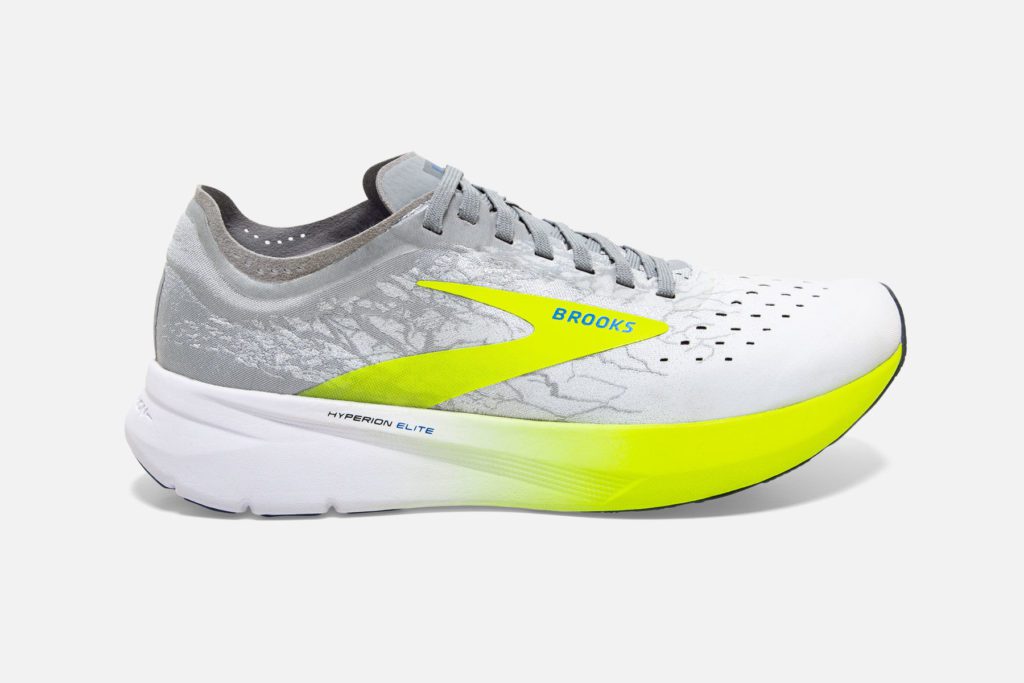 The Hyperion Elite 2 is the fastest shoe Brooks has ever designed. The shoe is extremely light, and it is designed to help runners maintain their natural motion path. This feature will have you running more efficiently, and efficient running means less tiring running. If your stride is as efficient as possible, you won’t lose any energy due to poor form, which means that you’ll be fresher later in a workout or race and that you will have more energy for a late surge as you approach the finish. This shoe is made to be fast, and it was designed with half and full marathons in mind. However, just like any fast shoe, just because it’s ideal for marathon runners doesn’t mean it can’t help you in shorter races, too.

The Hyperion Elite 2’s midsole features Brooks’s DNA Flash cushioning, a material that is both lightweight and durable. Embedded in the midsole is a carbon plate, which helps with the shoe’s motion path maintenance and delivers added propulsion. This shoe’s energy-saving and speed-inducing qualities make for an incredibly fast, yet smooth, ride, and they will be a big reason why you PB at your next race.