Last fall we reported that Australian pro cyclist Adam Hansen would be turning his sites from cycling’s top echelon of racing to the world of triathlon. As he focusses more on multisport training, he’s been designing his own triathlon bike – a sleek-looking machine that will feature special wheels and derailleurs.

“I’m going to do everything in-house,” Hansen tells Cyclingnews. “For me, if I just design it and give it to another manufacturer to produce, then I would never say that I made the bike. I really want to do it all by myself. I’ll 3D print the plugs for the mould, then I’ll make the mould from the 3D-printed piece. Then from there, I’ll make the bike from the moulds. I’ve got all the equipment.”

The bike is going to be extremely thin – just 28 mm wide, Hansen reports, and will also feature innovative derailleurs that will be inside the frame. The front chainring will float so that there will always be a straight chain line. Hansen will build the bikes in the Czech Republic, which is where he’s based.

If he can get it all put together in time, Hansen would like to ride the radical bike in Kona later this year, where he’s hoping to compete as a pro. In 2019 he competed at Ironman Florida, where he finished eighth in the 35 to 39 category in 9:05:54.

The 39-year-old Australian has long been known for his flair for design. You can find a link to his Carbon Shoes U95 on the hanseeno.com website – the “lightest shoes in the Pro Peloton by more than 50%” that weigh in, you guessed it, at 95 g. 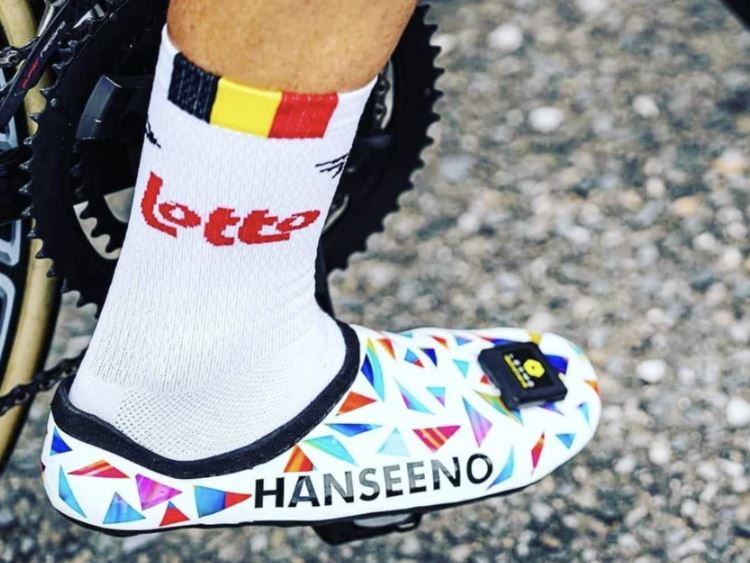 The custom-made shoes will set you back a whopping $3,500 euros, but you do get a 145 g training version, the ultralight 95 g version and a carbon fibre case. Once the mold is done, extra pairs cost 550 Euros.