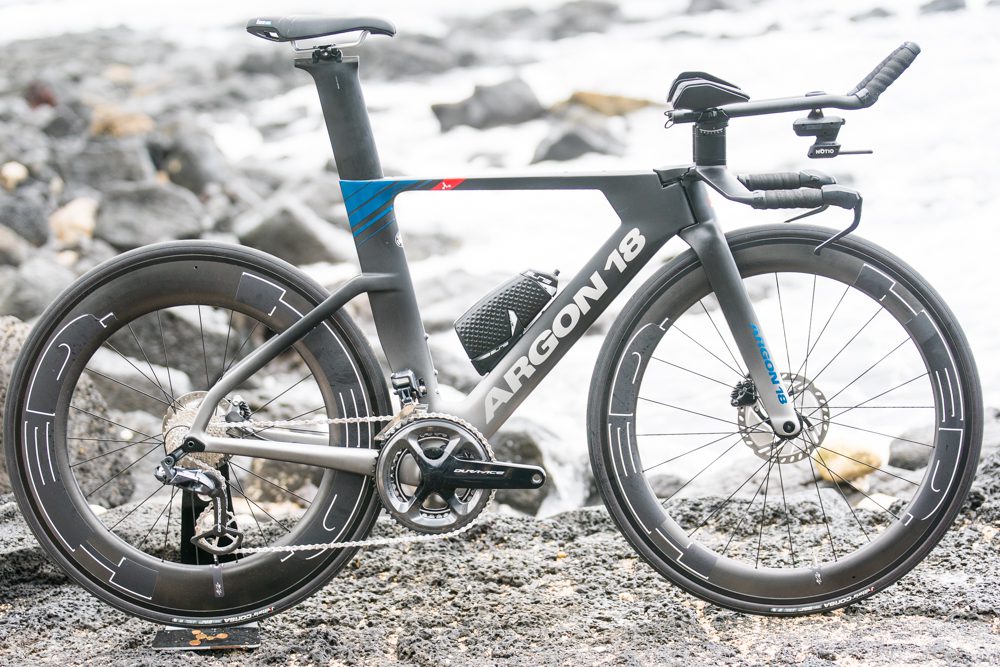 During the media madness that was the lead up to the Ironman World Championship, Argon 18 introduced a new bike – the E-118 Tri+. Lighter than the previous edition and armed with disc brakes, the new E-118 Tri+ was used by Heather Jackson in Kona to ride her way to another top-five finish in Kona.

The bike was designed with both triathletes and elite cyclists in mind. It was used by the Astana Pro cycling team to take the Team Time Trial at this year’s Vuelta, and by pro triathlete Eric Lagerstrom on the very technical course at the Ironman 70.3 World Championship in Nice.

Like Cervelo’s P5, this is a UCI-legal bike that will be attractive to both cyclists and triathletes looking for a fast, aero bike that performs and rides well.

“The fit we were able to get because of the lower front profile was perfect for me,” she said at the launch. “I’ve already had quite a few athletes ask me about it, who are smaller in stature like me.”

The performance of the bike is also enhanced thanks to the addition of disc brakes, which provide more powerful and consistent braking. The Argon 18 engineers managed to make the frame lighter despite the use of the disc brakes.

Jackson feels the weight reduction is another important improvement with the new bike.

“I try to find the hilly courses for sure,” she said. “It’s rare to find a lightweight tri bike that climbs like this one. I usually plan to really attack the climbs, and this is definitely the bike for those attacks.”

Another new bike announced in Kona was the E-117 Tri Disc, an entry level, UCI legal, tri bike that also features disc brakes. The bike features a non-integrated cock pit and will be available in two builds – an Ultegra/105 component mix and an Ultegra Di2 version.