Could over 100 million people be wrong? By the second quarter of 2021 that was the number of Apple watch users around the world, and that number has continued to grow ever since. The Apple Watch dominates the smartwatch market with over 30 per cent marketshare, but we all know that triathletes aren’t like everyone else. There aren’t that many people on the planet who spend as much time working out as we do, or who pride themselves on competing at multisport events. So, is there a place for the Apple Watch for a triathlete?

The answer is … mostly yes, but it’s complicated as the Apple Watch Series 7 might not be enough for some multisport enthusiasts. Last year we wrote about how fitness and health came together in impressive style with the Apple Watch Series 6. All that got better with the launch of the Apple Watch Series 7 last fall, which only added to the list of impressive training, health, fitness and safety features that have made the watch a viable option for triathletes looking to keep track of their training. Add to that the incredible smartwatch features that can help you become addicted to an Apple Watch in a hurry, and you have all that you’d ever need in a watch. Hence the 100 million plus users.

Launched last fall, the latest iteration of the Apple Watch starts at $529. It features a 20 per cent larger screen, much faster charging, added durability and improved cycling applications. The extra screen size is put mainly to use for larger onscreen buttons, vastly improving the user experience when you’re utilizing training apps. There’s also a full keyboard available with the messages app, which is surprisingly easy to use.

When you’re using an Apple Watch, you must pretty much resign yourself to the fact that you are charging it up every day. The Series 7 charges 33 per cent faster than the Series 6 did, and can get to 80 per cent charge in just 45 minutes. That means you can give it a quick charge at some point during the day, then wear it through the night to take advantage of the health data that can be gleaned from your sleep time. (We’ll talk more about the health data momentarily.)

The added durability comes from a 50 per cent thicker crystal, which helps the Series 7 become the first Apple Watch to earn an IPX6 certification, meaning its dust tight and water-resistant to 50 m.

What triathletes will most appreciate about the new Series 7 is the improved cycling features that now add fall-detection while biking, along with an ability to detect when you’ve started a ride. If you forget to start the watch as you head out for your workout, a few minutes in the watch will ask you if you’re out for a ride and whether you want to track it. (The same thing happens when you are out for a run or walk, or other activities.) While you’re out on a bike ride or run you can track all kinds of data including heart rate, elevation gained, calories burned, average speed and where you travelled (GPS coordinates). You can sync your workouts to other platforms easily, too. You can’t, however, sync the watch to a power meter, so you’ll still need a bike computer to get that data. 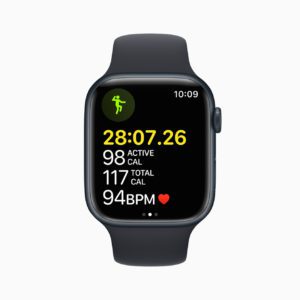 Where the Apple Watch truly shines is with its health and general fitness tracking. The watch keeps track of movement, exercise and how often you stand in a day. The idea is that by the end of each day you’ll have reached your exercise and movement goals, and stood up for a few minutes every hour. If you’re getting behind the watch will nudge you to stand or embark on some activity, and will even send you a message when you’ve had a more active morning than usual. It is a great tool to help ensure that you’re not using your triathlon training as an excuse to ignore the other components of a healthy lifestyle. 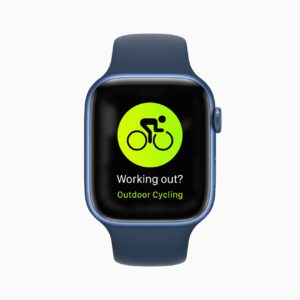 The watch constantly tracks your heart rate, providing accurate data on your heart rate variance and resting heart rate. At night it will track how many hours you slept and also track your breathing rate while you’re sleeping, too. There are other slick health related features that include ECG testing and blood oxygen level tracking, too.

There are lots of watches on the market that can provide similar fitness and health tracking applications, but none that can shine as well as a smartwatch. You can add a smartwatch plan and utilize the watch as a phone and messaging device when you’re phone isn’t around. That means you can head out for a run or bike without your phone and still be able to reach out for help if you need a ride home because of a flat or run into other problems. You can download music, podcasts or books to the watch and pair it with Bluetooth earbuds to be able to listen while you’re working out.

If you use other Apple devices, you’ll quickly take for granted how everything works seamlessly together. Pair the Apple Watch Series 7 with the impressive iPhone 13 and you’ll suddenly have a way to line up a remote photo from your watch – you can see what you’re about to shoot on the watches screen. (The iPhone 13’s camera is nothing short of incredible … but we digress.) Where you’ll really notice the seamless handovers from device to device is if you’re using some Bluetooth earbuds like the Airpod Pro or Beats Fit Pro. You can jump from your phone to your watch to your iPad or MacBook with ease. 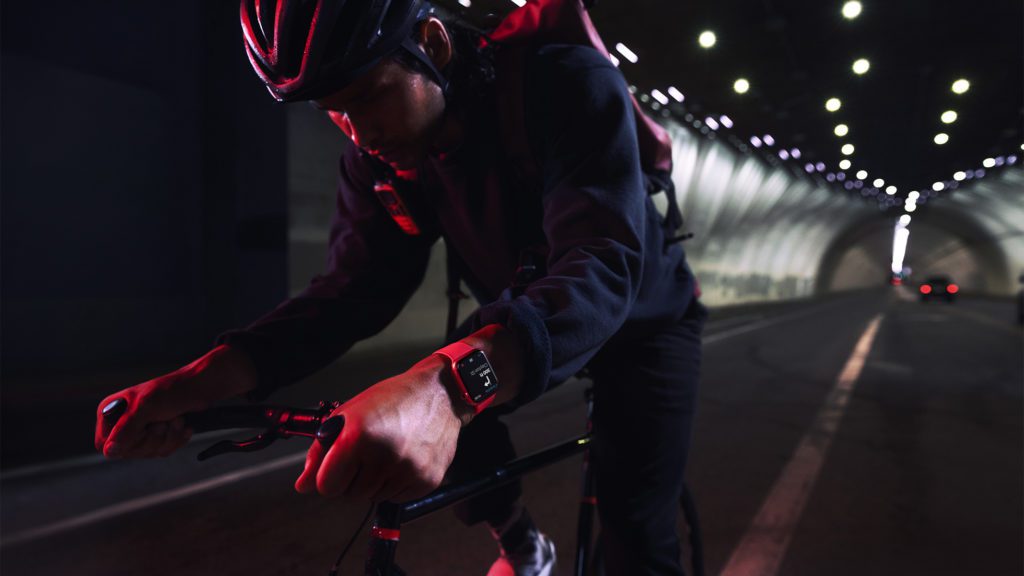 This is where the Apple Watch falls short compared to some of the other watches that a triathlete might be drawn towards like Garmin’s new Fenix 7 or Wahoo’s Elemnt Rival. You will need to charge your Apple Watch every day, pretty much, whereas with those other watches you can go for days at a time without needing to charge them. That’s the down side of an always-on screen, especially one that is as bright as that on the Apple Watch Series 7.

Remember that “it’s complicated” comment from earlier? For the most part, you can make an Apple Watch a more than reasonable fitness and health tracker, no matter how serious an athlete you are. If you measure power while cycling, you’ll need a bike computer, but most of us already have one of those, anyway. You can track swim and run workouts with ease on the Apple Watch, and get all the other benefits the watch provides. If you’re an avid full-distance competitor, though, you’re probably going to want something with a bit more battery power for those super-long brick workout days, and, of course, when you’re racing. Everyone else? Well, it’s not hard to see how the Apple Watch Series 7 might just be the watch you’re looking for.