This weekend, Canadians earned podiums at the Cagliari world cup in Italy and at Ironman 70.3 events in Victoria and Raleigh as well as at The Championship in Samorin, Slovakia. Here’s our round-up of the top Canadian races on the pro scene:

Joanna Brown has been having an incredible season so far with now two world cup podiums to her name.

“It feels amazing to be back on the podium,” said Brown. “I came here with a mission of getting on the podium, and I think being able to back up my performance from New Plymouth is a really good indication that training is going well and that I’m headed in the right direction.”

Wow. What a hard, hot, and hilly race. Couldn't be happier to come away with bronze and to share the podium with @kirstenkasper. Huge thanks to the city of Cagliari, volunteers, and race organizers who put on a great event. To my training partners, coach, sponsors, family, friends, and federation, thank you for making this possible.

Brown was joined by training partner, USA’s Kirsten Kasper in second on the podium. Switzerland’s Jolanda Annen won the race.

On the men’s side, Tyler Mislawchuk earned the highest Canadian result in 11th and Charles Pacquet placed 17th in his first world cup race ever.

Jen Annett and Taylor Reid each landed on the podium at Ironman 70.3 Victoria among deep fields on both sides. Reid, the defending champion spoke to Triathlon Canada after his race:

“It is always nice to podium on home soil. I really like Victoria and getting a chance to race in you own country is so nice. I always want to go for the win, but a podium is very satisfying and the crowds were awesome out there.” 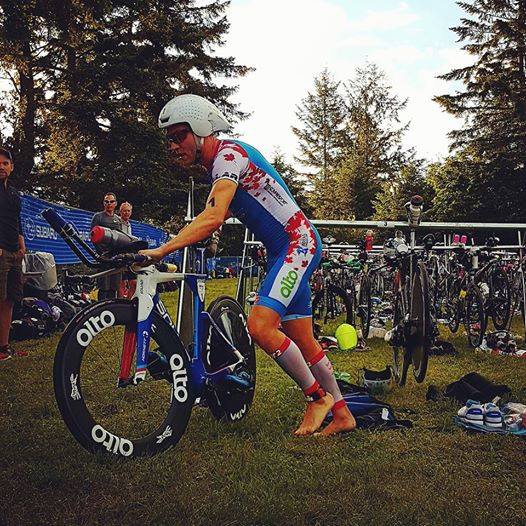 “I had a good swim and am always happy with a sub-25 minute 70.3 swim. This is happening more and more thanks to my zone 3 equipment. That put me in 5th place. I was able to put myself in second place by the end of the bike. I had about four minutes to make up on first place at the start of the run and I new I had to give it all out there. I was able to get within two minutes but just ran out of road to catch him. I am happy with all three today, but I will be looking for just that little bit more from myself at Mt. Tremblant 70.3.”

“I would have to say the difference for me today was my strong bike-run combination. I played it very smart and did not feel over taxed until the last kilometre.”

Stephanie Roy earned the win after showing she’s in fine form this season with a podium earlier in the year. Roy clocked the fastest run of the day which helped her move up through a stacked field of women after a solid bike split put her in contention for a good placing in the race.

Jackson Laundry, another young Canadian having a fantastic season so far, earned third while Antoine Jolicoeur Desroches placed in the top 10 as well, taking ninth.