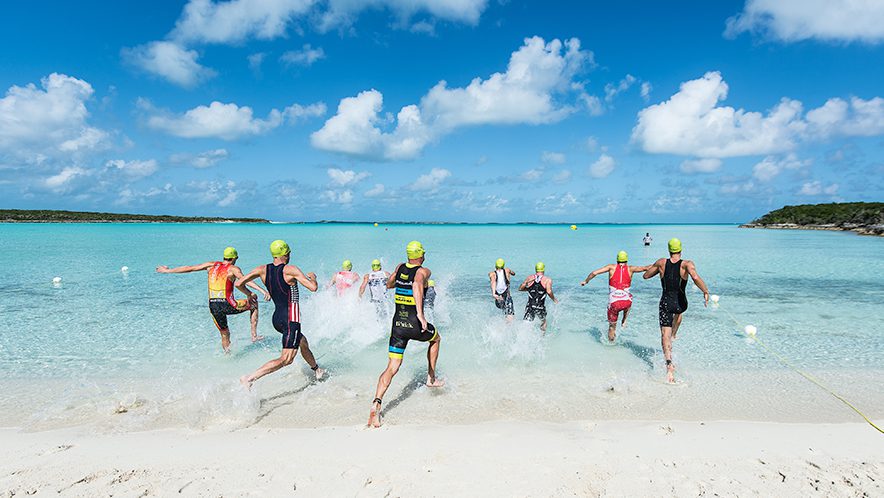 One of the most exciting triathlons of 2015 took place on a secluded island in the Bahamas in late fall. The Island House Invitational Triathlon is the first of its kind, inviting a small number of the world’s top long distance and short course athletes to take on each other and clock in a a unique triathlon racing format. Last year’s 20 invited triathletes competed over three days in an individual time trial, enduro race and non-drafting, sprint race to find the overall best male and female triathletes. Total racing distance over the course of the weekend was a half distance (70.3). Winners were awarded a share of the generous $500,000 prize purse.

Gwen Jorgensen and Javier Gomez took the titles at last year’s inaugural race, but this year’s 38 other male and female athletes are just as hungry for the win. Island House Invitational Triathlon takes place over the weekend of October 28 to 30 this year and while they haven’t announced the start lists yet, we can expect many of last year’s names — Tim Don, Mirinda Carfrae, Jan Frodeno, Flora Duffy — to be invited back.

As for Canadians, Heather and Trevor Wurtele raced last year and took sixth and eighth respectively.

Pro triathletes have shown great support for the event.

“It’s really fun to have a new challenge and this race format to me is really exciting,” Heather Wurtele explains in the video. “To really get to race… a lot of what we do in Ironman and half Ironman is pacing and the self-control, holding back… this is the complete other realm, you gun it all day.”

Watch the 45-minute documentary on the Island House Invitational Triathlon below.