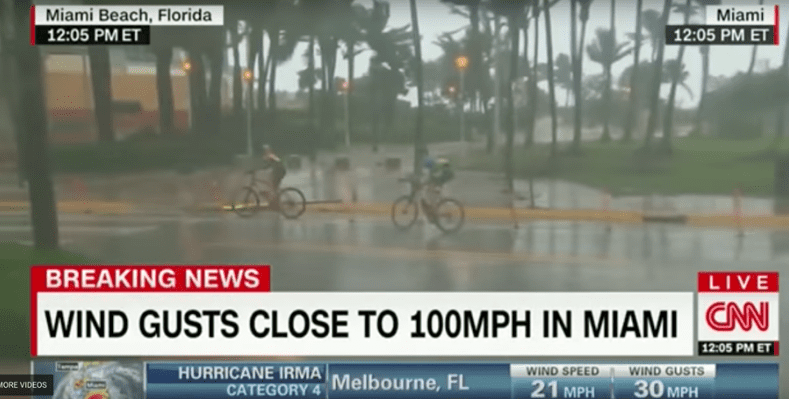 Hurricane Irma brought rain, flying debris and hurricane force winds to Miami Beach on Sunday. It was not an ideal place to be riding your bike. That didn’t stop two thrill seeking cyclists from heading out on two wheels for a ride in possibly the most extreme and ill advised conditions you could possibly ride in.

While recording a live segment, a CNN reporter holding on a metal railing to stay upright spotted two people riding their bikes with Irma’s hurricane force winds at their back. The cyclists quickly became the centrepiece of the short segment.

“Oh my god, this is incredibly—and I am going to call it what it is—this is incredibly stupid,” the astounded reporter says. “These two guys going out in the rain and in these storms. First of all, I don’t know how they are staying up on two wheels. They may be jobseekers but that is absolutely unsafe.”

Hurricane Irma slammed into Florida on Sunday after leaving devastation in its wake as it made it’s way through the Caribean last week. While it had weakened to a category 2 storm with 160 kph winds, it was still a powerful hurricane expected to leave destruction in its path.

“If those two guys get injured [Miami Beach police and fire department] will absolutely not be able to help them out,” the reporter said about the situation in the Miami area. “They will not be responding to emergency calls. If you dial 911 here, they can’t physically get to you.”

Hopefully the adventure seeking, storm chasing cyclists had good bike handling skills because with flying debris, heavy rain and strong gusts of wind not just anybody would be able to count on staying upright in such conditions.