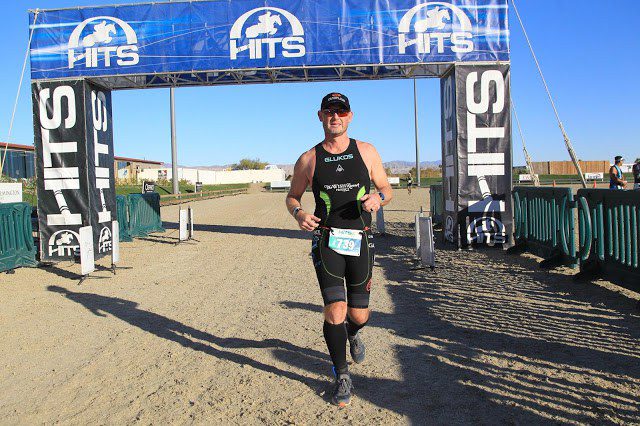 A triathlete who goes by the name “The Wish Runner”, is the subject of a Marathon Investigation profile after his recent race results have come under scrutiny.

Jason Easter, 40, is aiming to set the number of most half distance races completed in a year. He’s going after 30 races (it’s unclear if these are all Ironman 70.3-branded or other, or both) in 2017, and Guinness World Records approved his request in January. Over the course of his attempt, he intends to raise money for the Make a Wish Foundation — specifically, “to make 100 wishes come true” — with the average wish costing $10,031, according to Marathon Investigation reporter Derek Murphy. Easter has stated on social media he wants to raise $600,000 for the organization. In a Youtube video that has now been removed, Easter states that with the money raised, “All the proceeds go to The Wish Runner Project, and ten percent of that goes directly to Make A Wish.”

Marathon Investigation reported that Easter’s fundraising breaks down as:

10% donated to Make A Wish through The Wish Runner Project

5 % donated to The Children’s Tumor Foundation

Easter also used to have a website called The Wish Runner, which explained his fundraising goals in some detail. The website is no longer found at the original domain and his Facebook page has been removed as well.

The bulk of the report focuses on Easter’s race results to date. Easter’s Athlinks profile shows he has completed two half distance races — the HITS Triathlon Series race in Palm Springs (March 12th, 2016) and Ironman 70.3 North Carolina (October 22nd, 2016) in 7:36:43 and 8:20:02 respectively.

At HITS Palm Springs, Easter ran a 3:03:20 half marathon. At 70.3 North Carolina, he ran a 1:32:18. Marathon Investigation notes that, “Looking at his Athlinks history, all of his standalone half marathons are over two hours… [At North Carolina] he ran at a pace faster than his 5K personal record. If the course was accurately measured at 13.1 miles, he ran at a 7:03 minute per mile pace. His 5k P.R. equates to a 7:54 minute/mile pace.”

Such dramatic improvement has sparked speculation within the endurance community online, especially on Slowtwitch. One user claims to have witnessed Easter cheating at his Palm Springs race.

Based on their evidence, Marathon Investigation has stated they believe that “he did not complete the half Ironman in the time he is credited with.”

Course cutting in triathlon came into the media spotlight in late 2015 when B.C.’s  Julie Miller was disqualified from Ironman Canada that year and video proof in early 2016 proved she cut the course.