Most triathlete’s passion for the sport ranges from mildly obsessive to rabidly obsessive. The training keeps you healthy while the competition keeps you  motivated. That’s not to say, however, that you love everything about the sport, especially if you have been in it for a while. The initial romance can diminish and, just like in any other relationship, you start noticing wrinkles and warts. After time, you may find a few things that are just plain annoying. Sometimes it’s the equipment, sometimes it’s the places and sometimes it’s the people. With that in mind, we bring you our list of  Triathlon’s Top 10 Pet Peeves.

One of the reasons people get into triathlon is to be outside and experience nature and get some exercise while doing it. If you crave peace and solitude, you can run on the road or cycle on the trails, but until the cost of an Endless Pool drops substantially, or you become as beloved on YouTube as Lionel Sanders, chances are you’ll be spending time in a busy swimming pool. Lifeguards do their best to monitor the action, but sometimes are unaware of the unsavoury and perhaps unsafe behaviours in the aqua-jungle. People swimming too slowly in the fast lane, too quickly in the slow lane, or the dreaded flotilla of floaties creeping into any swimming lane are transgressions that have many age-group triathletes spiking their morning electrolyte drink with Smirnoff. Before you reach for the bottle however, consider, instead, establishing a friendly relationship with your local lifeguards. Greet them on deck with a smile and a friendly word or two and, that way, when you need to call in the reinforcements to reign in “fin man” swimming down the middle of the lane, they’ll have your back. 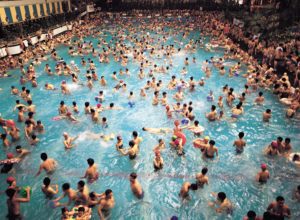 It’s about 3 o’clock on a Sunday afternoon. It’s 100 degrees out and you just dismounted your sweat-covered bike after a taxing 112-mile ride. It’s Ironman Sunday. There’s nothing in your body not whimpering whilst you shuffle out of transition, your gait akin to that of a newborn moose. And then, you see them through a heat- and fatigue-pounded brain at the side of the road. They seem so happy, so enthusiastic, so unlike anything you are feeling. And then you hear them – the three cruelest words anybody could utter at your most fragile moment: you’re almost there. You know what’s ahead of you, hours of strife, soul searching and more electrolyte drink than anyone should ever drink in one day. You are, most assuredly, not almost there. And it’s not just at an Ironman where you hear these soul-shattering words, either, it can be at a marathon or even a 10 K. What is ironic is that nobody ever seems to yell those three evil words when they truly mean something, about 100 metres from the finish line.

Most of us experience some body issues the first time we try on “proper” triathlon clothing. Wearing the bulge-revealing suits is more a necessity than fashion statement. Flaunting our bodies in form-fitting spandex makes many of us uneasy, but if the alternative is crotch-numbing chafing, or worse still, wind drag, we don the spandex and do the race or workout. What makes many of us scream in frustration, though, are the undersized pockets most triathlon clothing seems to have. Whereas cycling jerseys have enough room for spare tubes, a cell phone and ample food, unless you have the manual dexterity of a surgeon, good luck putting anything of worth into that sleek form-fitting triathlon top. And, if you somehow managed to coax a gel into your top or shorts, just try getting it out while riding on your aerobars at 60 kph.

In spite of all the positive aspects of our sport, one downside is the cost. Triathletes require gear for all three sports, something single-sport athletes don’t have to worry about. In addition to the bathing suits, time trial bikes and running shoes, there are each sport’s provincial membership dues. If you swim with a master’s group, ride the occasional gran fondo, or run a major 10 km race, often you need a membership in each provincial organization, or need to pay a one-day fee. Wouldn’t it be nice if Triathlon Canada could work with each of the provincial sanctioning organizations to implement a singular fee that could amalgamate all these costs? When you add in these membership charges, along with all the other expenses of playing triathlon, its no surprise that you see way more triathletes than runners filing for bankruptcy.

For many triathletes, our main goal in racing is to get to the finish line. Finishing with dignity is a bonus. We work at our jobs, train when we can and let the results fall where they may. If the stars align, we may visit a magical spot called “the podium” once in a blue moon. This isn’t, however, the world of the Kona Qualifier. Blessed with good looks, better genetics and an even better dedication to training, the Kona Qualifier is equally at home on the podium at your local sprint as they are running back from the Energy Lab. Although we do our best to feign enthusiasm about their adventures in October when we speak with the Kona Qualifier, we sort of resent them.

Novice triathletes are the lifeblood of our sport. Their positive attitudes, unbridled energy and innocence serve as a healthy counterbalance to the jaded perspectives of some more experienced athletes but one area tri-vets can help newer athletes with is advice on what to bring to a race. Looking at some bike racks, you’d think some racers were preparing for an Everest expedition. They have really taken the Boy Scout motto of “be prepared” to the next level. Excessive gear next to a bike, whether it’s on a triathlon towel or in the tri-bucket, can be annoying in some cases, and other cases dangerous, especially if it interrupts the flow of athletes while leaving transition. Perhaps local triathlon clubs can educate their newer members about what gear is critical, and what gear is better left in the car, or at base camp.

As polite Canadian triathletes, we believe in fair play and in welcoming athletes of all types of diversity, but that doesn’t extend to diversity of strokes in the swim segment of a triathlon. In this case, conformity is valued and expected. Too bad the breaststroker didn’t get the memo. This group is renowned for leaving those who come to close black and blue thanks to all the bruises these non-conforming brutes inflict onto other triathletes. Whether you are experiencing a panic attack or simply need to adjust your goggles, if you do need to breaststroke during a race, do the Canadian thing and pull off way to the side of the swim course to limit your chances of causing your fellow swimmers a black eye or a trip to the dentist.

If you’ve ever done a cycling road race, other than a gran fondo, you know the finish line is often lonelier than a meeting of the Julie Miller fan club. Not so with triathlons. The finish line is a celebration of fun, fitness and finishing. That is, of course, unless the race organizers run out of food. Having a mob of several hundred hangry athletes is a recipe for cannibalism. The only thing worse than insufficient post-race food is the wrong kind of food. After being on course for two, three or sixteen hours, the last thing you crave is another banana. Some race directors, however, know the way to a triathlete’s heart is through their stomach, and they offer proper post-race nourishment like pizza, burgers and even beer. It’s safe to say word of mouth advertising for a race is going to be a lot more positive when it’s done on a full stomach.

Although triathlons of any distance are supposed to be endurance events, involving strategy and pacing, you’d never know it if you just looked at the first 300 and last 300 metres of many races. What you’ll often see are bursts of speed that would make Brent Hayden or Usain Bolt lime green with envy. The first minutes of the swim can be some of the fiercest in all of sport as egos, endorphins and inexperience collide in a cauldron of confusion. The finish line is an equally puzzling venue as participants who were traveling with the urgency of a sloth on Quaaludes for the previous five, ten or twenty kilometres seem to be pushed by a supernatural force through the finisher’s chute. Athletes who have that kind of energy at the finish line would likely benefit from more even pacing throughout the event.

Triathletes are often confused with sadomasochists for their fascination with pain and suffering, but you shouldn’t beat yourself up psychologically. Often triathletes diminish their amazing accomplishments by saying “only” or “just” when describing the race distance they competed in. Whether it’s a sprint distance or an ultra, each involves motivation, preparation and perseverance to perform well. Completing a race, of any distance, is a huge accomplishment, especially when you compare it to what many couch-dwelling Canadians do on weekends. Give yourself the respect you deserve for being a triathlete and save the self-flagellation for those 800s on your Tuesday track session.

What can be done

Although the list of triathlon pet peeves could stretch from Whistler to Mont-Tremblant, it doesn’t mean that we need to take up knitting or golf. Some of these pet peeves can be ameliorated with polite feedback to the offending parties. Other pet peeves, however, are just part of being a triathlete. Although they will continue to be annoying, they certainly won’t stop us from participating and experiencing the joy that triathlon has to offer.