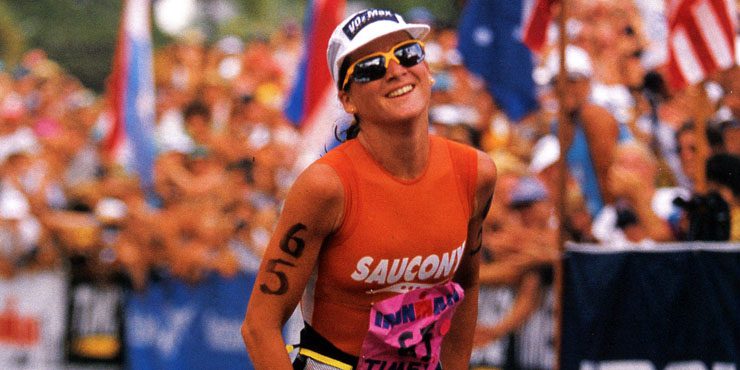 This story was originally published in our March/April 2016 issue.

We’ve just finished our Ironmanlive interview with Heather Fuhr as she prepares for the 2006 Ironman World Championship. There’s a new media intern from Ironman who has been listening in as I talk to the various pros about their preparation for the biggest race of the year. The athletes are all fitter than ever – rippling muscles can be seen under skin that seems almost translucent because of their insanely low body fat percentages. Some seem to be brimming with confidence. Others, like Fuhr, are much more understated. Having raced in Kona every year since 1990, she knows that there’s nothing to be confident about when it comes to racing on the Big Island. She provides a typically Canadian outlook: she’s done the work and is ready to go. She’ll take what the day, and the island, gives her. As Fuhr walks away, the intern looks at me and shakes her head.

“I can’t believe how beautiful Heather is,” she says. “Especially for a triathlete.”

I’ve never let that intern, who continues to work in the industry, live that one down – the shock that a triathlete could somehow also be attractive has provided me lots of ammo to tease her with over the years. And, while I certainly agree with her, she only got it half right when it comes to Fuhr.

Looks have always played a part any time anyone has talked about Heather Fuhr. Almost any time her name appeared in print, the words “the girl next door” seemed to be included.

“In her quiet, likable, girl-next-door persona…” Matthew Dale wrote in 2007.

“Heather has always looked like the girl next door,” Lynn Bermel wrote in 2005.

“Heather Fuhr, the girl next door, became the first Queen of Kona from the sport’s next generation,” wrote Bob Babbitt in the early 2000s.

That “girl next door” archetype implies someone who’s cute, unassuming and honest. In the comic world, Betty was the girl next door, Veronica was the stop-Archie-in-his-tracks vamp. While that intern would argue she was a blonde version of Veronica, Heather Fuhr has always been seen as “Betty-like” because of the other facets of her character. Sure there were the magazine covers and Saucony posters that accentuated her looks, but those never defined Fuhr. It’s that “unassuming” component that has always stuck, and that word doesn’t begin to describe Fuhr’s quiet nature. Ask anyone who has interviewed her – getting her to talk about her successes over the years is about as easy as running a two-hour marathon. (Actually, any odds maker who has met Fuhr would say there’s more likelihood of the latter than the former. A few years ago she told me she hadn’t really been doing any training and was in horrible shape … and then I found out she had just set a new course record in the Catalina 50 Miler.) 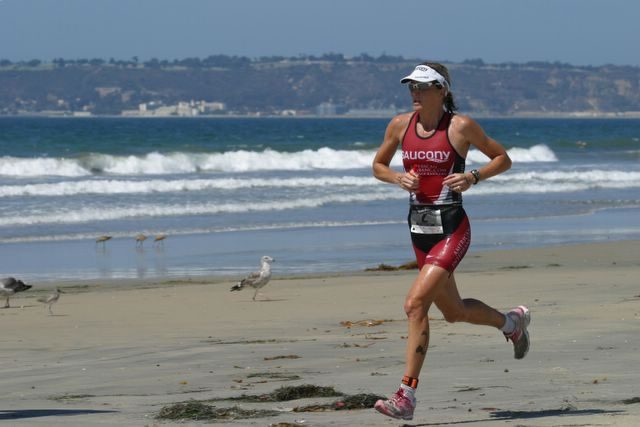 Even though she hasn’t lived in Canada for almost 20 years now, the bottom line is that Fuhr is just so, well, Canadian. Polite to the extreme, Fuhr was always available for interviews, always appeared at press conferences and had lots of positive things to say and was a sponsor’s dream. As she ran by her competition on the way to one of her 15 Ironman titles, she’d always provide a polite tap on the back, offering up a bit of encouragement. To this day I’ve yet to meet a single one of her competitors who has a negative thing to say about Fuhr. In 1997, as she passed her mentor, friend and training partner Paula Newby-Fraser at mile 12 of the Ironman World Championship, the tap was there again.

Even the most successful women’s triathlete of all time couldn’t muster up any animosity at getting passed by Fuhr on the sport’s biggest stage. Newby-Fraser was genuinely thrilled that Fuhr was beating her. She’s so likeable that even though she’s tasked with taking care of over 1,000 registered professionals for Ironman, and routinely has to tell them they’re not going to get what they want, they all still love her.

So do I have anything to say that might imply there’s a hidden Veronica in this girl next door that is Heather Fuhr? There’s so much more to her story than simply triathlon’s most successful “girl next door.” Heather Fuhr grew up just outside of Edmonton, playing “every sport imaginable” at her elementary school in Duffield (about 65 km west of Edmonton) and then focusing more on running in junior high and high school. It was at high school in Stony Plain that she met Roch Frey, a competitive swimmer. Both competed for the University of Alberta – he in the pool and her in cross country and track. The two have remained a couple ever since they met.

The respect goes both ways, which the world got to see in 1997.

“If you watched it you will never forget Fuhr’s pass on Ironman legend Paula Newby-Fraser during the marathon on the Queen K,” remembers Shawn Skene, who covered many of Fuhr’s wins for Ironmanlive and, as a fellow Albertan, watched Fuhr and Frey compete in their early years in the sport. “The pass was equal parts symbolic and competitive. The heir apparent [Fuhr] accepting the encouragement from the reigning “Queen of Kona” [Newby-Fraser] as she made the pass. That propelled Fuhr to an Ironman World Championship title and has become a piece of the Ironman lore.”
Over the next 10 years Fuhr would add to her list of titles with wins in Lake Placid (five), Japan (four), Brazil (two), Switzerland, Germany and California. Her 15 Ironman titles puts her second on the all-time win list to Newby-Fraser. It was all that success that prompted both Triathlon Canada and Ironman to add Fuhr to each organization’s Hall of Fame last year, solidifying her status as one of the greatest athletes the sport has ever seen. Surprise of all surprises, the “girl next door” was gracious in her response when congratulated on the Ironman Hall of Fame induction.

“I didn’t do what I do because of wanting to get accolades like that, but it’s a nice way to reflect on things I’ve done in the past,” she says. “I think that’s the biggest thing. You do what you do, you go through the motions and you have fun with it. When you finish you’re able to reflect on it. Something like this makes you appreciate what you did more.”
It should also not come as a surprise that Fuhr has seamlessly moved from a career as an athlete to one within the sport.
“The last year I raced here I didn’t make it very far out on the bike and said ‘uhuh,’” she said during an interview in Kona last October. “I had given so much of myself on this course and it takes so much of yourself to be out there. You have to be in a certain place mentally and I wasn’t there anymore. Physically I probably could have done it, but mentally I wasn’t willing to put my body through that anymore. I was fine with that. Yeah, it was emotional, but I was OK with it. I was happy with everything that I had done and ready to move on. An easy part for me was that I was involved in the sport in another way already. I had already started working with NA sports at that time. I was still involved in the sport. Had I not still been involved with the sport it would have been a lot more difficult.”
Nowadays you’ll see Fuhr bouncing around at the various Ironman world championship events, taking care of the VIPs and the pros. She seems happiest when she’s out of the limelight, but every now and again, if you look carefully, you’ll have a chance to see her in exactly the same light that intern saw her in 2006.

A month after the infamous “she’s so beautiful” quote I got to work with Fuhr when we hosted the video coverage of the inaugural Ironman 70.3 World Championship. Five minutes into the show our earpieces crackled with the news that the helicopters couldn’t get up, so there would be limited coverage of the race action for the first few hours of the show. It became the “Kevin and Heather talk show” as we killed time with race reports and anecdotes about the racers. I was astounded at just how good Fuhr was in this role – if she had wanted it, a career in broadcasting could easily be in the cards.
The thing is that the “girl next door” moniker misses out on one critical aspect of what makes Heather Fuhr so much more than just a cute, wholesome, unassuming gal from Alberta: a sense of grace that she can turn on and off at a moment’s notice. This is a woman who won the beer mile put on by a bunch of the San Diego tri crowd on New Year’s Eve in 2004, chugging four beers and running a mile in just over seven minutes. This is also the woman you’ll often see handing out the awards at the Ironman World Championship in a form-fitting dress and heels, all the while gently coercing age groupers and pros alike to the right place on the stage. But make no mistake, when it came to racing, Fuhr held nothing back.
“She is very quiet, but deep down she has a lot of drive and, through sport, she was able too show this quality,” says Frey.

We all got to see that one year as Fuhr started the marathon at Ironman Lake Placid in the midst of an incredible rainstorm. The water running down Main Street as she ran out of T2 was more than six inches deep and everything around looked like a mucky mess. Fuhr couldn’t have cared less. There was a race to be won.