Those of us who competed in triathlon during the 90s will fondly remember the “good ol’ days” of the sport when things were, well, so much simpler. If you long for the days when a Timex watch was all you needed to track your workouts and race-day entries were a reality, read on! 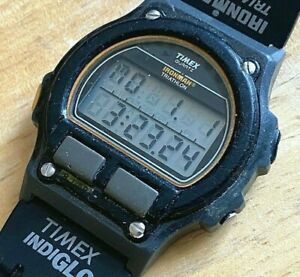 The first Timex Ironman Watch came out in 1986, but through the 90s the watch remained a mainstay on every self-respecting triathlete’s wrist. In 1992 Timex introduced the first Indiglo version of the watch. The Ironman watch was such a big deal that even President Bill Clinton wore it, donating one of his early Ironman watches to the Smithsonian. Remember the times we were so excited to get a new watch that could track 16 laps vs. the 8-lap model from the previous year? Who needed power, heart rate, running efficiency and a the like – you went out the door, started your watch, and started running. Or biking. (In the pool we used a pace clock.)

Sync a workout from your watch to your phone right to Training Peaks? Yeah, right. You only saw that kind of thing on Star Trek, The Next Generation. We kept our training logs by hand!

Dave Scott and the rest of the sport’s biggest names wouldn’t be caught dead in a trisuit back in those days – even at the Ironman you wore a swimsuit for the swim, then pulled on a singlet to get you through the rest of the race. Lori Bowden (pictured above) didn’t even bother with the singlet – her swimsuit did the trick for the entire race!

It’s hard to believe that we were still debating about the merits of Tri-specific bikes through much of the 90s. Bikes with steeper seat-tube angles were still a rarity early on in the decade, and transition areas weren’t jam-packed with carbon frames. Remember all those early wins pros had on Cervelo bikes in the late 90s and early 2000s? Those were all on aluminum frames!

You mailed, faxed, or called-in entries

Online entries? Yeah, that didn’t happen. You mailed those in, unless you were entering a race with one of those really progressive, modern operations that let you either call or fax in your information! Heck, at a lot of races you could even enter on race day.

A travel agent helped you organize your flights and accommodation

Expedia? Orbitz? What are you talking about? There was a travel agent you called who organized your entire trip for you. The really good ones had even been to where you were going and could make suggestions on where to stay!

You fixed your own flats

Even if you had a cel phone, it was the size of a brick and sure as heck wasn’t going to fit in your cycling jersey pocket. If you got a flat in the middle of nowhere, you weren’t calling home to ask someone to come pick you up.

You waited for a magazine to get race results

Clicking on triathlonmagazine.ca to get the latest updates wasn’t an option back then. (Sadly, even waiting for an issue of Triathlon Magazine Canada wasn’t an option until the next decade.)