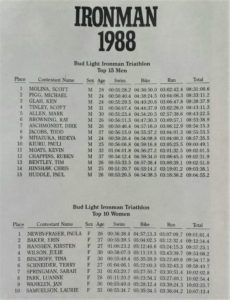 It was 30 years ago, but the top Ironman triathletes were still putting down some impressive race splits.

The Energy Lab at the IRONMAN World Championship. Hot. Long. Isolated. Intense. A place that either makes you or breaks you! #markallencoaching

Here are some takeaways. First, the athletic accomplishments of those in 1988 are quite impressive. Considering how in 2018 we have all of these tech, shoe, bike, swimwear, training and bike companies continually pushing their limits to maximize performance. The 1988 results really exemplifies the ‘engine’  these triathletes had. Second, look how far we have come. The competition is so tight. Just to crack the top 10 in an Ironman event is extremely difficult, let alone Kona.

So, let us marvel in the performances of our favourite triathletes, because it truly is a test of the human limits.