While Lionel Sanders has been tearing things up racing on Zwift, Sam Long became the new king of the mountain up Mt. Lemmon. Canada is still represented at the top of the Mt. Lemmon rankings, though, as Paula Findlay captured the women’s QOM.

Last month we reported on Lionel Sanders’ impressive ride up Mt. Lemmon in Arizona where he took the Strava KOM on March 17. Sanders rode the climb in 1:16:27, besting Phil Gaimon’s previous best of 1:18:32.

The following week last year’s Ironman 70.3 Chattanooga champ, Sam Long, came close to taking Sanders’ KOM, doing the ride in 1:16:48. That ride was a few days after Long had completed a 400 km effort, so Long rested up for his next go at the climb, and was able to just take Sanders’ record by . On April 8 Long did the Mount Lemmon climb in 1:15:40, breaking the Sanders record.

“I targeted it with three attempts,” Long said in an interview with Slowtwitch’s Herbert Krabel. “The first one being just the top third on a regular training day. This gave me the belief I can do the top part in the time needed. The next attempt was with Tyler Stites – a pro cyclist in Tucson. We took turns pulling each other up and got close. I came 20 seconds off the KOM and Tyler was 6 seconds off, and knew if I hit it on a good day I would be golden for it. In the third attempt, I properly rested and did a NP of 406 watts for the climb. Ultimately it’s been a project for me to stay motivated in this time as well as providing inspiration and a source of strength to others. I figure it’s the only opportunity I’ll have for a while to do things like this. It had to be the Mt. Lemmon KOM as this is one of the most storied and historic KOMs there is. It also helped that Lionel had just broken Phil Gaimon’s record and they were having a bit of a battle. I figured I’d toss my hat in the ring.” 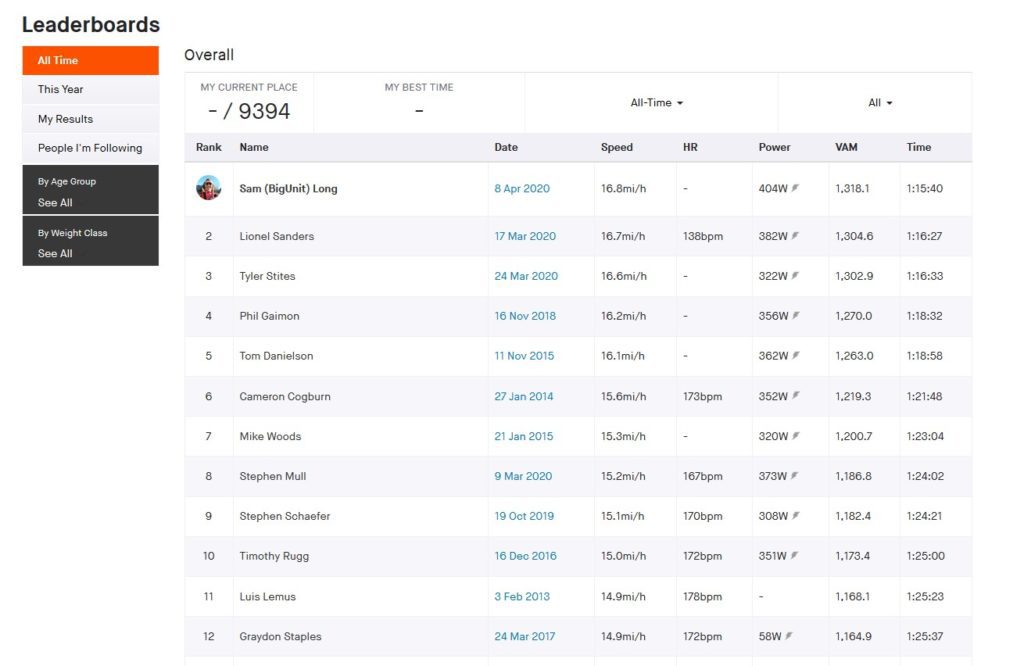 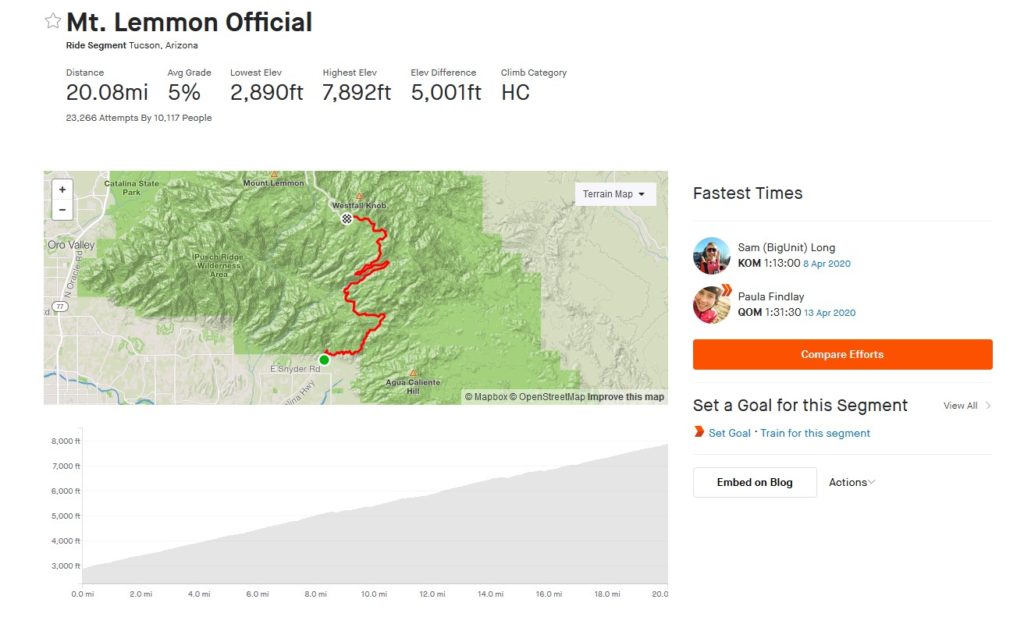 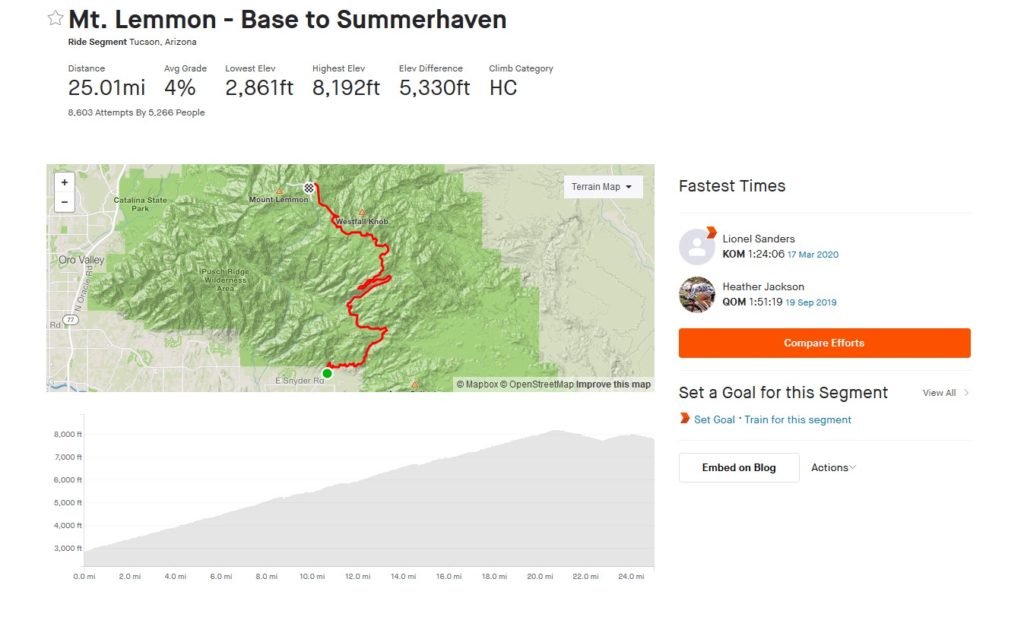 With racing on hold for a while one would imagine this won’t be the last we’re reporting on the KOM rivalry in Arizona.

Canadians can still celebrate a leader for the climb up Mt. Lemmon – earlier this week Olympian Paula Findlay took the women’s lead on Strava for the Mt. Lemmon climb.

Inspired by the guys to go for the Mt Lemmon QOM. Didn’t think I was fit enough right now but my competitiveness took over pretty quick 😂 thanks to Wattie and Eric for the sag & camera crew, and Heather for keeping me riding honest to the top. Stay tuned for more on the Sunday vlog 😛 📸 @seanwattiewatkins

Findlay took almost four-minutes off the previous best time for the climb, finishing in 1:31:30. American Heather Jackson, considered one of the sport’s top cyclists, finished the ride that same day exactly five minutes behind the Canadian. 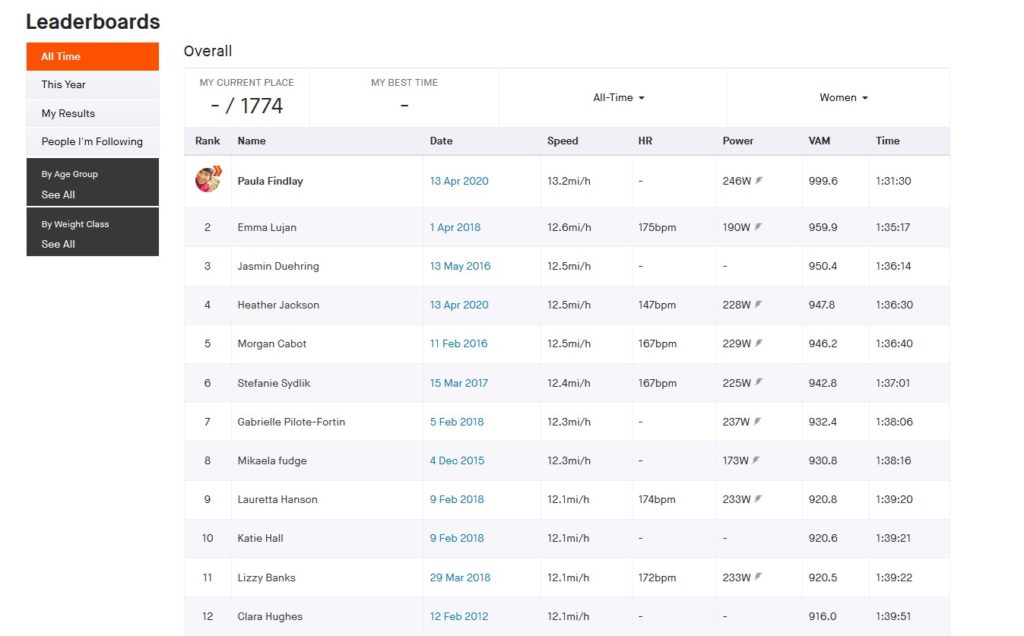