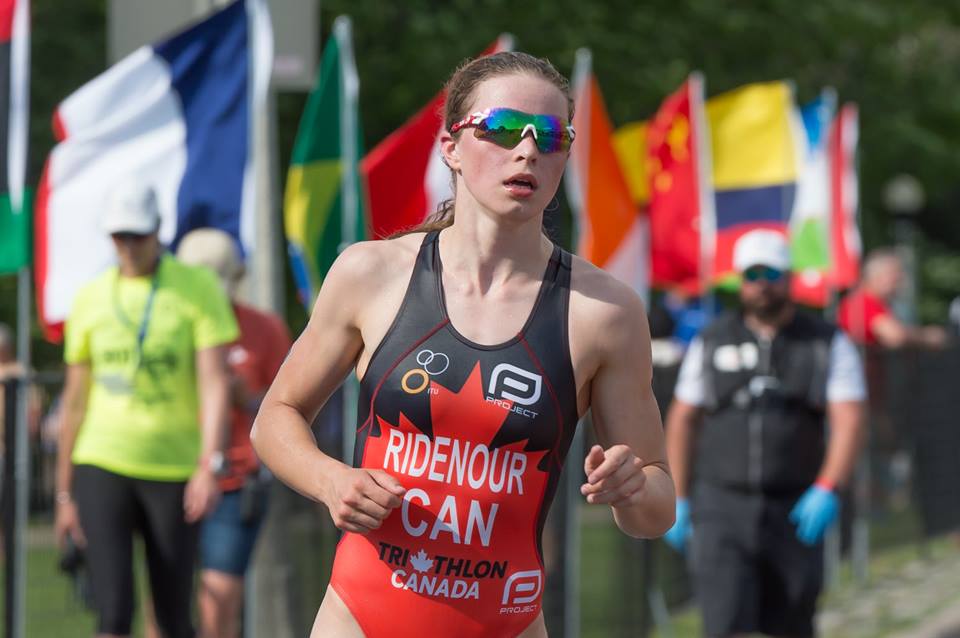 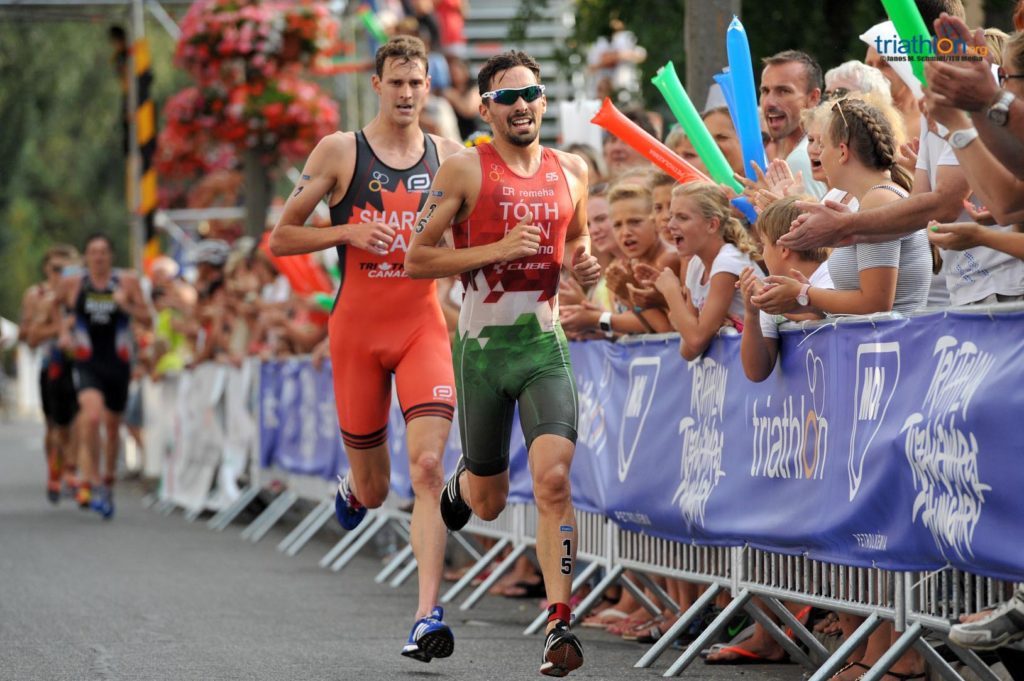 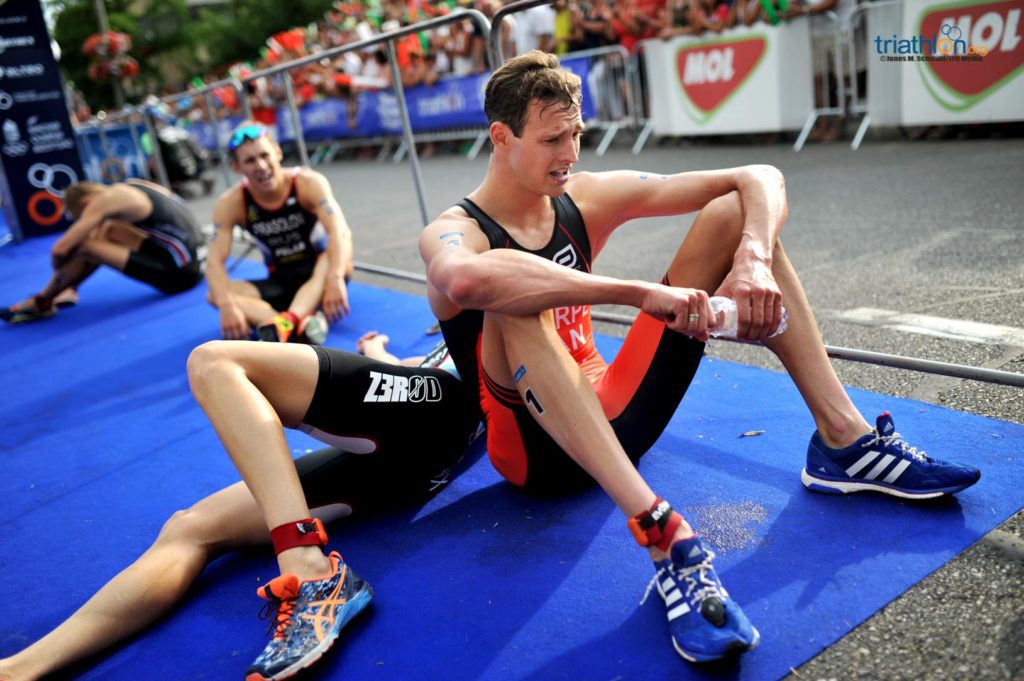 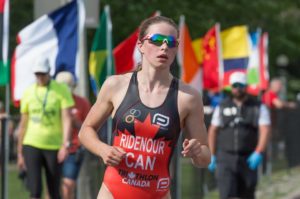 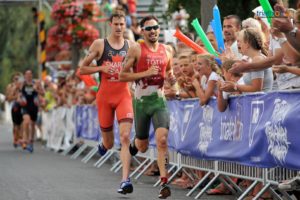 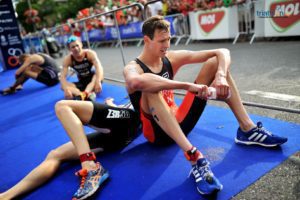 TISZAUJVAROS, HUN—On the eve of his 26th birthday, Canada’s Matt Sharpe came up a stride short of the ultimate gift of hopping onto the World Cup podium at the world-renowned triathlon race in Tiszaujvaros, Hungary where he finished fourth.

Victoria’s Sharpe, who qualified for Sunday’s final after winning his semifinal heat on Saturday, was solid in all three disciplines of the sprint distance race, en route to finishing in fourth spot with a time of 55:19.

“Overall I’m happy with the effort, but disappointed in the result,” said Sharpe. “I came here to podium so I feel like I missed out, but I honestly couldn’t really have done anything different. This just adds more fuel to the fire.”

Taking advantage of a strong 750-metre swim where he came out of the water in eighth spot, Sharpe was one of four athletes to control the 20-kilometre slick bike course lined by thousands of screaming fans.

“After breaking my collarbone earlier this year, I haven’t had a ton of confidence in my swim, but I saw a glimpse of the past today so that is exciting,” added Sharpe. “We had rain on the bike and that made things a little messy. I stayed near the front most of the time, and made a bit of a move into T2 as the second pack caught our group. It felt a bit like a bike race so that was fun.”

Coming out of second transition in first spot with Stefan Zachaeus, Sharpe fed off the electric atmosphere in Tiszy to match stride-for-stride with the lead group on the five-kilometre run before running out of gas in the sprint finish.

“Coming off the bike I definitely had some fatigue in the legs. There were a few moments I really had to dig deep, but I pride myself in my mental strength and I was able to stay near the front. At the end it was a big sprint, and unfortunately, I was just short of third,” said Sharpe. “This place is unreal for racing and I’m so happy to race in a place where they have invested so much in Triathlon.”

Hungary’s Bence Bicsak thrilled the hometown crowd, clocking a gold medal time of 54:58. The Russians edged out Sharpe for the final two spots on the podium. Dmitry Polyanskiy claimed the silver medal at 55:13, while Ilya Prasolov won the race for the bronze at 55:18.

Charles Paquet, of Port Cartier, Que., was the only other Canadian in the field and finished 13th (55:49).

The 21st edition of the world-renowned Tiszy World Cup boasts a unique format where athletes are divided into two semifinal heats held on Saturday. The top-nine athletes in each of the three men’s heats, followed by the next three fastest times, advanced to Sunday’s final.

Canada’s Desirae Ridenour capped off a dream week by winning her second straight gold medal – this time at the Junior European Cup race in Tiszaujvaros.

Feeding off the momentum of winning her first international race at the CAMTRI North American Championships one week ago, the 17-year-old Ridenour took down many of the world’s top junior triathletes Sunday morning after clocking a time of 42:05 in the two-day event.

“It was such an amazing feeling to win today and nice to see the work that I have done in training is paying off,” said Ridenour, who qualified for the finals after winning her heat on Saturday. “It was such an amazing atmosphere. There were massive crowds here today with the whole town coming out to watch and cheer on all of the athletes. I am really pleased with how things went.”

Coming out of the water in third spot after a strong 500-metre swim set the tone for a nearly flawless race by the Canadian teenager. Charging out onto the 12-kilometre bike course with a trio of athletes, it was Ridenour’s teammate, Holly Henry driving it to the front of the pack after posting the fastest bike time.

The two Canadians dismounted their bike at the same time in second spot to set up a run for the medals.

“We all worked well together increasing our lead. I tried to stay hydrated on the bike as much as I could so the run wouldn’t be as painful,” said Ridenour. “I sat back for the first two loops of the run, saving my energy. Part way through the third loop, the Hungarian took off and I kept with her. I stayed behind her until the final 300 metres where I sprinted passed her. I just kept up the pace till the finish line.”

Hungary’s Dorka Putnoczki settled for second place at 42:16. Olivia Mathias, of Great Britain, finished 23 seconds off the leading mark in third spot at 42:28.

While Canada’s Holly Henry hammered the bike, it was her sister Hannah Henry rocking the run. The young Victoria resident stormed into fourth place with a time of 42:44. Holly Henry placed 23rd at 44:33.

It has been a week to remember for Ridenour. In addition to winning her first two international junior races, the Canadian teen qualified to race in the Super League Triathlons.

“I am super excited and nervous to race in Super League. It will be a great learning opportunity as I will be competing against the best triathletes in the world,” added Ridenour. “I have a bit of confidence, but I don’t like to have too much because you never know what the top athletes are capable of.”