Pinarello has built some of the fastest bikes on the planet. Successes like the hour record and time trial wins at the Giro d’Italia, Tour de France and Vuelta a Espana prove it.

Not only has Pinarello proven itself on the cycling scene, they’ve also shown their potential on the triathlon circuit. Last year, Australian triathlete and former professional cyclist, Cameron Wurf, rode his Bolide to break the bike course record in Kona. He rode the 180K in 4:12:54, over five minutes faster than the previous record.

This performance pushed Pinarello to invest the resources to develop a version of the Bolide specifically designed for triathletes, the Bolide TR+.

While keeping the aerodynamic elements of the Bolide TT, Pinarello tweaked the geometry of the TR+ in order to better meet the unique requirements of the long distances of an Ironman.

The head tube has been increased by 35mm in comparison to the Bolide TT, delivering a more relaxed position on the bike without sacrificing aerodynamics. Pinarello also lowered the bottom bracket by 8mm on the Bolide TR+, for enhancing stability. At the same time, Pinarello steepened the seat tube angle to a more triathlon friendly 78-degrees on the Bolide TR+.  In combination with the straight seat post, Bolide TR+ easily allows for the kind of forward position that are favoured by many triathletes. As on the Bolide TT, the length of the chainstay remains at a tight 395mm, preserving good transfer of power to the rear wheel, and a responsive feel.

Starting with the Bolide TT as the baseline, Pinarello developed the Bolide TR+ using wind tunnel testing and computational fluid dynamic (CFD) simulations to meet the needs of the modern triathlete. As a result of intensive testing, three key areas are modified in the TR+, the fork blade, a front nose cone cover and the rear seatstays/seatpost junction. 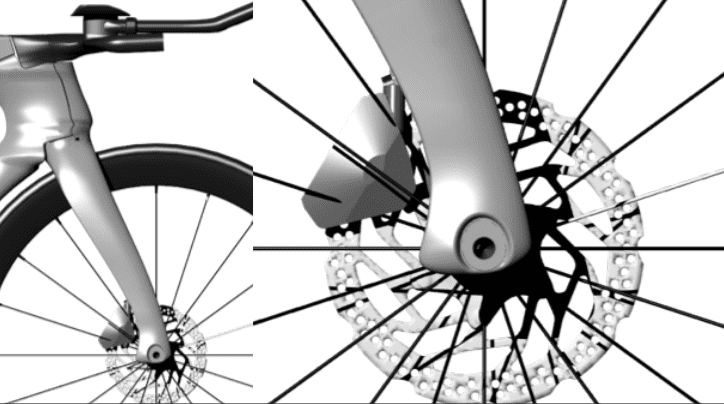 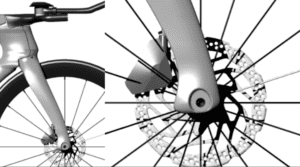 Free from UCI regulations, Pinarello increased the depth of the fork blades, to improve the aerodynamic flow around it. Additionally, the extensions at the drop outs of the fork, what Pinarello calls the fork flap, has been revised to integrate more cleanly with the thru axle in a bid to further reduce aerodynamic drag.

As is now standard on modern tri bikes, cable routing is entirely internal on the Bolide TR+. Upfront, a small nose cone cover is integrated into the front fork, concealing the hydraulic hose to the front disc brake from the wind. Ensuring everything that the air hits, is a shaped surface.

With the move to disc brakes, the seat stays and seat tube junction no longer needs to house the rim brake in the rear. Pinarello took the opportunity to redesign the mono stay to be slimmer, for improved transition of airflow to the rear wheel.

Despite these significant changes, there is strong family resemblance between the Bolide TT and Bolide TR+, a good thing considering the pedigree of the Bolide TT. Features such as the concave downtube to shield a water bottle, slight sloping top tube and general shape of the frame are all carried over .

Another thoroughly modern element of the Bolide TR+ is that it is disc brake only, if you want a rim brake version, you are out of luck. Equipped with large 160mm disc rotor front and rear, the tri version of the Bolide should have plenty of braking power on tap. Flat mounts are use for the disc calipers, which was developed specifically for road usage, and ensures compatibility with the latest Shimano, SRAM and Campagnolo disc brakes. Rounding out the future proofing features, the Bolide TR+ are thru axle equipped (12x100mm front, 12x142mm rear), which means it should be compatible with latest wheels for the foreseeable future. 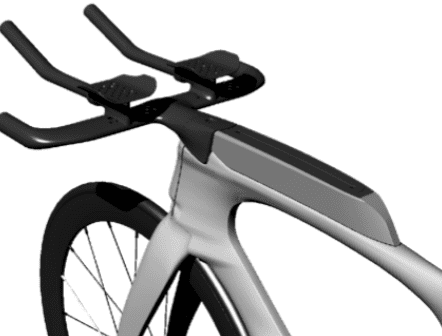 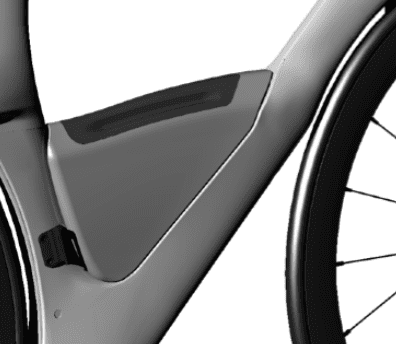 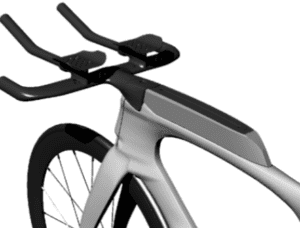 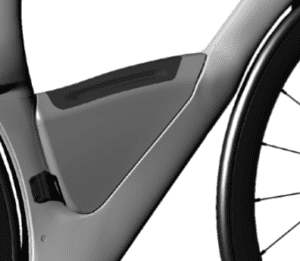 With nutrition being such an important element of long course racing, no new tri bike can expect to succeed without addressing this key requirement. Indeed one of the main objectives of the Bolide TR+ project for Pinarello, was to integrate storage to satisfy the needs of triathletes, without sacrificing the hard won aero gains.

The Bolide TR+ is designed with integrated bento box, and down tube storage. The bento box, easily accessible on the top tube, is designed for gels and energy supplements. It has a rubber closure on top for fuss free access.

The down tube storage is designed to carry either food or a flat kit, depending on your needs. Attached with just two bolts, the storage box is designed to match the shape of the down tube and seat tube, and can be easily removed and replaced by a bottle cage.

In fact, according to Pinarello, aerodynamics are improved with the bento box and down tube storage in place on the Bolide TR+, than without.

The Price of Speed

In addition to the top end Bollide TR+, Pinarello is also releasing a Bolide TR. Both the TR and TR+ shares the same frame shapes, geometry, flatmount disc brakes, thru axle and integrated storage. What separates the TR+ from the TR is the type of carbon used and the lay up. The higher-end Bolide TR+ are built with Torayca’s T1100G carbon, and will be lighter and stiffer than the Bolide TR, which are built with Torayca’s T700 UD finish carbon. However, Pinarello’s Canadian distributor will only be be making the TR+ version available, for now. As to the price for all this Italian speed? The suggested MSRP for a frame set, which includes the integrated bar and stem, is a cool $15,800.