When it was announced that Ironman had been sold by Chinese conglomerate Wanda Sports Group to Advance, one name involved in the deal immediately jumped out to those who have been covering the sport for a long time – Jesse Du Bey.

That’s because Du Bey was a key player in the game-changing sale of Ironman to Providence Equity Partners (PEP) in 2008 – he was a managing director of the company. Wanda bought the Ironman from PEP in 2015. Du Bey left PEP in 2013, becoming the managing partner of Orkila Capital, a co-investor in the Ironman deal, and returns to Ironman’s board of directors – Orkila is a co-investor with Advance.

Earlier this week I caught up with Du Bey in a phone interview from his home in Hamburg, Germany – he’s been living there since 2018. I ask what keeps bringing him back to Ironman.

“I love the sport,” Du Bey says, “I like everything about the sport, both literally and figuratively.”

Du Bey’s attraction to triathlon began in the early 2000s, when he was working 100 hours a week in New York City.

“I’d been a runner growing up,” he says, “I came to the brand as an amateur athlete trying to stay fit and stay inspired. My first impression of the sport was total awe. The triathletes in New York were a super-welcoming group. I got a bike and progressed through the sport and got to Ironman.”

Du Bey competed in a number of full-distance events over the years, including Ironman Lake Placid and the Ironman World Championship in Kona – finally “getting it right” in his third time competing on the Big Island in 2009 when he finished in 9:28:05 and took seventh in the men’s 30 to 34 age group. 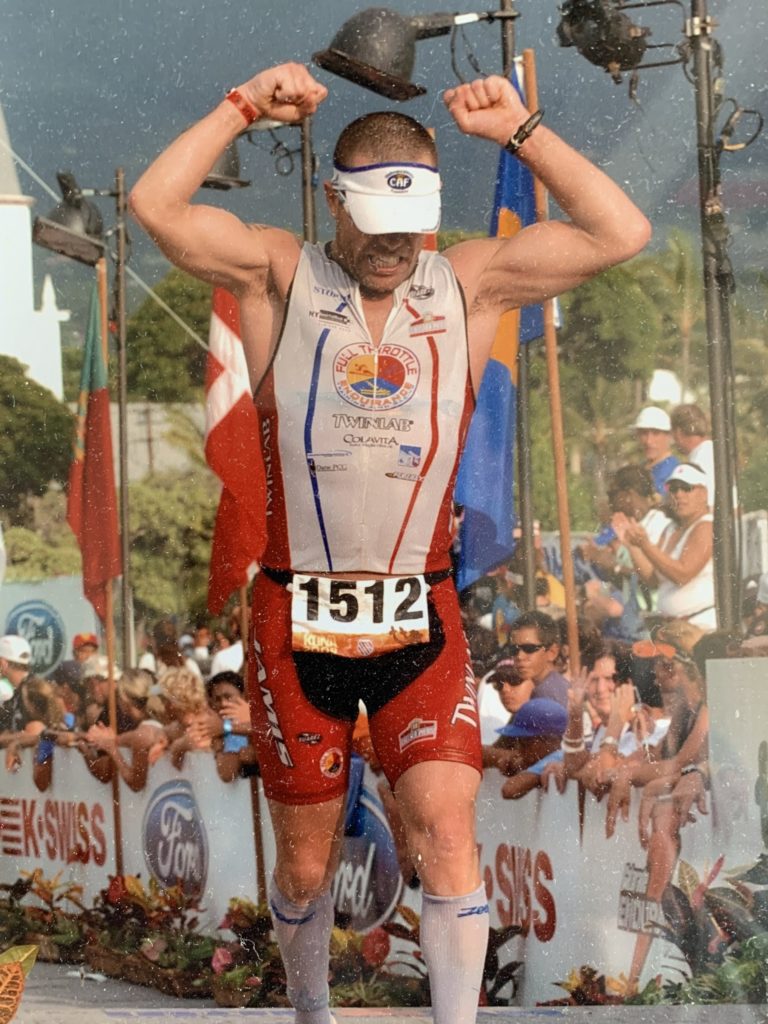 In his early days as a triathlete, Du Bey remembers “just me and a few psychos in Central Park” training, but over the years he saw some dramatic change – suddenly there were literal pelotons of riders in Central Park.

“People were starting to re-orientate their leisure time from things they watch to things they do,” he says.

From his early days in the sport Du Bey was “intrigued by the business model.” In 2004 he sent Ironman CEO Ben Fertic an email, which began a four-year journey to PEP’s eventual purchase of the company from the Gills family.

“The 2008 sale, that was the most exciting time of my professional life,” he remembers. “I was bringing together my love of the sport and my passion for growing companies. There is no better brand in the world than this brand.”

In 2008 Ironman was still in the process of acquiring many of the events around the world as it worked to become a global event series – “knitting together a global platform,” Du Bey recalls. Now the company has achieved all that and expanded into mountain biking, trail running, marathons and much more.

As an athlete himself, Du Bey’s passion for the sport ultimately comes through, even when he’s talking about the business side of things.

“We need to give people the chance to accomplish something they never thought they could do,” he says. “That the unique thing about this business. It’s so simple – it doesn’t matter how tall you are, your skin colour or anything else – you can get it done. If you get it done, you’re an Ironman. That’s the essential beauty of this thing – giving people the opportunity to achieve that goal.”

“The potential of a digital product is that people will be able to have their best day on more days,” he says. “Ironman is uniquely positioned to take advantage of this trend. When you look at all the energy athletes put into the sport … We have a huge opportunity to see athletes between race days.”

While he hasn’t competed in a triathlon since Ironman 70.3 St. Croix in 2010, Du Bey hints that we might see him on a start line in the near future.

“My kids keep asking me about it,” he says.

Forget the kids – sitting in board meetings talking about the triathlon will no-doubt fuel a comeback, too.