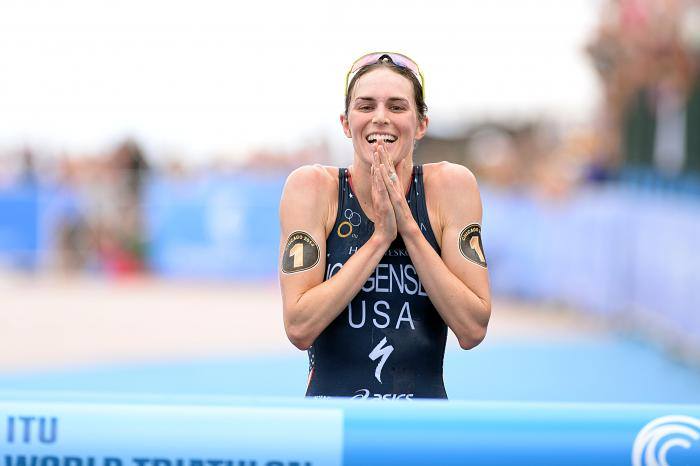 With the men’s race now behind us, it’s time to focus on the women who will toe the start line at 10 AM on Saturday morning. Just like the Brownlees on the men’s side, there’s one name that everyone’s throwing around as the gold medal favourite for the women.

Gwen Jorgensen held an unprecedented winning streak in ITU racing over the last two years, which included a world championship and Rio test event win and was only broken by a silver and bronze at two WTS races this year. With such an impressive resume, many believe Jorgensen is unbeatable in Rio. However, there not only four previous Olympic medallists in the field, but also a handful of eager and strong contenders proven capable of taking Jorgensen down.

What can we expect Saturday? The most exciting thing about the women’s field is there are a good number of very well-rounded triathletes who are powerhouses in each of the three disciplines. Here are our predictions for the women’s race, broke down by swim, bike and run.

The bad news for every woman on the start line on Saturday is that Jorgensen is a good swimmer, even in a non-wetsuit swim like Rio’s. From what we saw this morning, the leaders on the swim determined the overall standings in the end. Taking a look at the yet event results last year, Jorgensen was middle of the pack coming out of the beach-start swim, but she’s regularly up there in the lead packs at other WTS events. Her countrywomen Sarah True (4th overall in the test event) and Katie Zaferes (6th at the test event) are also strong swimmers and since the USA decided against sending a domestique for Jorgensen in Rio, it’s every woman for herself and True and Zaferes will be hungry for the win themselves.

Keep an eye out for current world no. 1, Bermuda’s Flora Duffy coming out of the water in a solid position. She’s another fast swimmer and even better cyclist. She’ll be eager to make that lead pack so she can crush the bike leg and hopefully claim a medal.

Brazil’s Pamella Oliviera isn’t necessarily a medal contender, but was the second fastest swimmer at the test event, has the hometown advantage.

The men’s race today proved that the demanding hills of the bike course will make or break the athletes.  The women will want to learn from the crash this morning and be extra careful on descents, but we can expect to see the blistering fast speed the lead men maintained to be just as impressive in the women’s race.

While you can’t really call anything about Jorgensen’s ability a “weakness”, if there’s one area she’s not as dominant in it’s on the bike. For the women going after her, we can expect to see those that excel on the swim and bike to hammer out of T1 and try to get as far away from her as possible, as was the case at WTS Hamburg this year.

Keep an eye on Flora Duffy, Great Britain’s Non Stanford and Hellen Jenkins, the Netherland’s Rachel Klamer. Duffy is never afraid to make a breakaway on the bike and it worked out in her favour at the recent WTS Stockholm where she took her first WTS title. Stanford is a notably fast cyclist who also excels on technical courses and Jenkins is one of the two women who beat Jorgensen in a race this year. Klamer is also one of the most skilled cyclists on the ITU circuit and crushed the bike leg of last year’s test event and this year’s  WTS Hamburg where she beat Jorgensen.

Chile’s Barbara Riveros has been under the radar lately but took the overall fastest bike time at the test event, proving the hills and technical descents are no issue. Though they haven’t been as dominant lately, don’t count out reigning Olympic champion Nicola Spirig and Canada’s Kirsten Sweetland, two other cycling powerhouses.

With the calibre of the medal contenders in the women’s field, it’s likely we’ll see a tighter footrace to the finish line than in the men’s race this morning. The fast and flat course also means we could see someone beat Emma Snowsill’s 33:16 Olympic record run split from Beijing.

Jorgensen is arguably the fastest runner on the ITU circuit which has largely contributed to her all her victories. She recently clocked the fastest run split ever recorded in a WTS race when she frantically charged to the finish line in Hamburg to take bronze.

All three of Great Britain’s female athletes are used to running some of the fastest run splits on race day. Non Stanford, Vicky Holland and Hellen Jenkins are all WTS champions who have ran their way to first place finishes with strong 10K run splits. If they aren’t already ahead of Jorgensen on the run, expect them to give her a good run for her money on Saturday and pose a serious threat to the rest of the field after T2. Barbara Riveros, Katie Zaferes and Sarah True all clocked the top fastest test event run splits after Jorgensen, Holland and Stanford. Given what we’ve said about them in the other disciplines, too, we think we’ll see our three podium finishers in any of those six names.