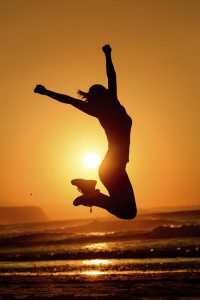 One of the best parts of triathlon is you can always beat someone to the finish line. You can also be schooled by a 12 year old in the pool during an indoor triathlon or by the wily veteran master’s runner on the final 10km. We line up head to head in age groups to compete with our friends and fellow racers to the rank order online results. It’s almost impossible not to compare yourself to other athletes. It might be to your advantage not to.

It’s all about you

You are your oldest running buddy, your own most important significant ‘other’, your most critical cheerleader in life. Because of that unique position, you’re in a position to compete against yourself if you want to improve in triathlon.

Create realistic goals of setting a personal best time on an appropriate course. Challenge yourself to a new off-season focus whether it is related to working on your weakness, exploring new cross training activities, or fine-tuning your time management. When it comes to race day, line up with yourself and run your own race. That’s not a mantra created by losers. For most people, setting your own goals leads to more consistent motivation, performance, and positive pressure. Insisting you need a certain place on the podium or you have to beat a certain club member can backfire. You are in control of yourself. You are not in control of other people’s performances.

Do what the pros do

At this year’s ITU WTS season opener in Abu Dhabi, many of the pros were trying to qualify for Rio through their national team selection process. In interviews, you’ll notice they rarely compare themselves to their competitors.

Many of the top pros use internal motivation to achieve their success. Abu Dhabi Silver medalist Richard Murray could not outrun his training group teammate, winner Mario Mola. In his post-race interview, he said that he was concentrating on his own race. In that way, he let the audience know that he wasn’t demoralized by his competitor’s run split. 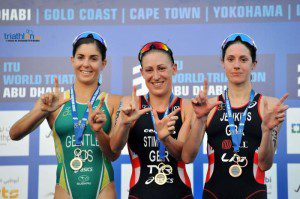 On the women’s side, Helen Jenkins who came in third is in a battle for the last spot on her British team alongside Jodie Stimpson, the Abu Dhabi winner. She spoke about her race plan for the next qualifying event and did not dwell on her countrywoman’s gold medal performance. Jenkins said “It’s really good to get on the podium after a tough year last year. It shows I’m moving in the right direction for our selection race in the Gold Coast.”

Do what the pros do. They know a thing or two.

It’s not about you

Appreciate that a race is not just about when you cross the finish line. Remember why you race and what drives you to train. This takes the pressure off comparing yourself at the race. If you focus on weaknesses at the swim start, try to simply embrace the awesomeness of the starting line. Remember, every triathlete has the same tendency to be anxious, uncertain, and compare themselves to others. This puts us all in the same position – the start.

Embrace that and enjoy the day. It is a privilege to be where you are. In your own skin. No comparison to others required.

Dr. Willer is a psychiatrist at St. Michael’s Hospital in Toronto and an avid triathlete for the past 18 years. He is also a 9-time Ironman, and a Marathon Des Sables, Newton 24 Hours of Triathlon, and Ultraman Canada finisher.